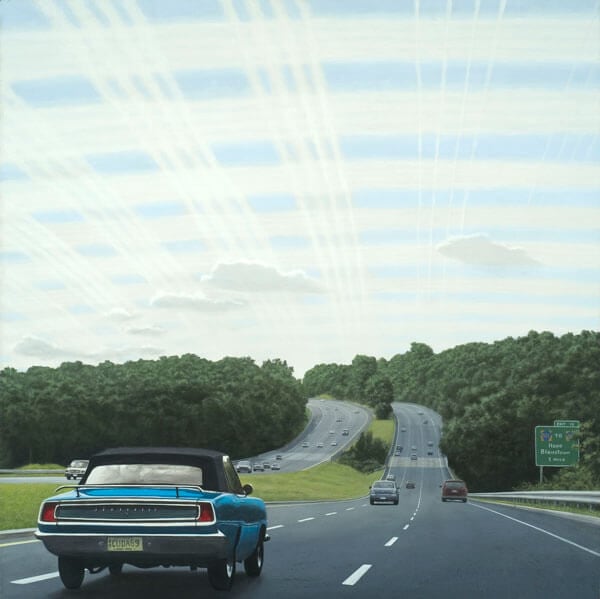 How would a hundred visual artists overhaul an upmarket hotel?  If you’ve ever wondered, your answer is currently at the Hyatt Regency in Exchange Place.  For the next two days, that hotel — or at least two floors of it —  belongs to painters, sculptors, photographers, thread-stitchers and canvas manipulators, lucid dreamers, arts organizers, all-purpose appreciators, and collectors looking to score an ideal piece. The second annual Art Fair 14C opens to the public at noon today and runs until 8 p.m., and if you haven’t had enough, they’ll be doing it again on Sunday from 12 until 6.  Tickets and weekend passes are available through the Eventbrite link at www.artfair14c.com.

The action takes place on the eighth and ninth floors, which means you’ll get an impressive look at the Hudson River between glances at artworks. The ninth floor of the hotel hosts a juried show of pieces by New Jersey artists; they’re all together in one grand exhibition gallery.  On the eighth floor, each room has been given over to a single artist, artist collective, or arts organization to arrange according to their whims. Many of these artists are also locals, but a few have come to Exchange Place from much farther away. Attendees are encouraged to meander down the halls of the hotel, probing these makeshift galleries one after another. It feels a bit like eavesdropping, a bit like party-crashing, and more than a little like urban exploration.

We headed to the Hyatt for a Friday night preview, and didn’t know what to expect. What we found was a grand, generous exhibition that, despite its size, was surprisingly coherent. Themes emerged: the beauty of the post-industrial environment and the repurposing of found objects, whimsy and good humor, depictions of streetscapes, roadways, bridges and girders, and, naturally, a copious amount of Jersey love. Here are a few other things we learned at this blowout event — one that’s a hoot to experience, and a quick way to understand the scope and depth of local visual art as well.

Artists really know how to redecorate a hotel room.

The rooms at the Hyatt aren’t too big, but artworks often are. Exhibitors have had to get creative, and in so doing, they’ve managed to transform a corporate hotel into a treasure box of clever surprises. Bayard, the impish spirit behind local gallery Eonta Space, has hung one of his fluffy, huggable Seussian sculptures in a closet as if it was a particularly outré robe (another Bayard work waves hello to visitors on their way in to the hotel.) The bathroom of the NJCU Art Department pop-up gallery has been flooded with enough colored light to make it resemble a disco — and yes, the party extends to the bathtub.

Some of the most striking pieces in the entire fair have been simply lain on the beds like exhausted business travelers: Juichigatsu, an arts organization visiting from Tokyo, has propped up Nobuyuki Fukata’s virtuosic stitched portraits right there atop a queen mattress. No surface is safe from the artists’ imaginations.  Philippe Halaburda, a Brooklyn artist who organizes a confetti-rain of short rectangular strokes of paint into imaginary maps, encourages visitors to affix strips of tape to the window overlooking Jersey City. An hour after the doors opened, that window already looked like a crazy page from a fantasy atlas.

This you probably already knew.  But if by chance you didn’t, the 14C Art Fair — which is, after all, named for a Turnpike exit — ought to put you straight.  Perhaps I’m biased (I am), but I felt that the finest work in the fair was pure Jersey, and Jersey rendered with remarkable fidelity to the source. Tim Daly, a Hoboken painter with a powerful sensitivity to place, somehow squeezed grand, gorgeous images of the Meadowlands and the Pulaski Skyway in his narrow hotel room. The result was something like a Jersey panorama, with familiar images everywhere, and roads leading viewers deeper into the swamps. 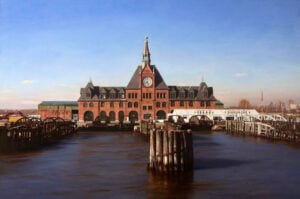 The stark realism of Daly’s works was matched, stroke for stroke, by the extraordinary near-precisionist renderings of New Jersey landmarks by Studio 7 artist Gary Godbee. His large and handsome oil painting of the New Jersey Central Railroad ferry terminal was a show-stealer; it radiated pure pride, and that sense of unearthly symmetry usually found in pictures of British manor houses. Then there’s Daly’s strangely unnerving image of cars speeding past the Hope and Blairstown exit on Interstate 80 under a high sky crosshatched with contrails.  The combination of the automated and the bucolic, the machine-framed setting, the promise of escape, the overtones of surveillance, the environmentalist critique alongside the roar of the engine — all of it was pure Garden State.

Other artists were somewhat more allusive.  Loura Van Der Meule, who works in Jersey City, contributed a majestic but somewhat sorrowful portrait of the Powerhouse in oil pastel, its sides cracked and its smokestacks rising against a faint pink sky.  It’s an emotional image.  Yet it wasn’t quite as gripping as her remarkable painting of a sealed entrance to a low building, washed in the faded, institutional blue of Jersey industrial zones.  The Garden State means splashy landmarks, but just as surely, it means particular details that long-time residents will immediately recognize.

Nothing is quite as dreamlike as the built environment. 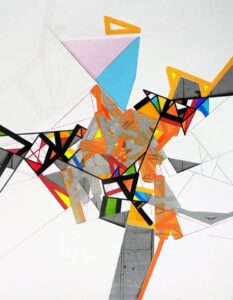 “When I look at New York City, I see no curves,” said Halaburda of his kaleidoscopic renderings of color and shape.  Instead, Manhattan comes at the artist in right angles and sharp diagonals, pointed, jagged, and perhaps a bit accusatory, and it’s that emotional state that he rendered in his imaginary maps. Anne Finkelstein’s work is more figurative, but hardly less emotional: There’s a soul of abstraction in her paintings of orange construction-worker netting and shafts of light illuminating the off-white tiles of subway stairwells. Her city is brightly-colored, but shadowed, depopulated, but filled with the evidence of human activity.

Finkelstein shared a hotel room with West Orange artist Allan Gorman, who chases a similar aesthetic down darker alleys. Gorman is attuned to the symbolic resonances of windows and walls, and the play of sunlight and shadow on floors. His best work: an image of a single distant open door at the far end of an empty room, its jamb hot with light from an outside source. It could be a factory, or a house abandoned, or one waiting for an occupant. It looks like it has secrets. But it won’t give them up easily.

Some of the best pieces in the fair are in the Jersey juried exhibition – and they show a New Jersey that might not be familiar to visiting New Yorkers.

Like Gorman, Judith Lieberman gets emotional mileage from a lit-up aperture in a wall. She shows us a house from the outside — snow swirls white against a background of blue twilight. Yet there’s a defiant orange trapezoid shaking a hot fist at the storm. There’s life inside. The dark is closing in, but the permanent flame of electricity will ward it away.

Lieberman has set this scene in Whitehouse Station, a small town connected to the metropolis by Route 22. Near Whitehouse and beyond, the terrain in the Garden State begins to get rougher as the coastal plain gives way to the hills and reservoirs of the West Jersey ranges. This is farmland, and some of the richest in the nation, too, rich enough to hang that famous nickname on the state. James Fiorentino makes that bounty manifest in a startling medium watercolor of a Flemington farmhouse that’s crisp as a photograph. The wooden barn has been battered by the elements, and the tree is withered and autumn-bare, but the impression that the painting gives is one of great solidity and near-permanence.  Like Lieberman’s dream of a winter’s night, this work speaks eloquently of perseverance.

But the best image in the entire Art Fair comes from a familiar source. Photographer Ed Fausty was once the bard of 111 First Street: His portraits of the old Lorillard factory brought its fragility (and the fragility of the community that worked there) to life in colors that were strange, rich, and unearthly.  He’s since decamped to Boonton, where he has a gallery; I’ve been delinquent and I haven’t visited yet. His contribution to 14C makes me want to get in the car immediately. Fausty has photographed a haunted street choked by trees, with the sky overhead slashed by telephone wires. As is often true with Fausty’s photographs, the composition is impeccable, and the tone is downright ominous. With typical Fausty frankness, he’s called it “Looking Down a Very Dark Road.” Sometimes, not much more needs to be said.

This is a collaborative effort from Jersey City’s arts leaders, who demonstrated that their visions are complementary.

The prime mover behind the 14C Arts Fair is Robinson Holloway, who runs the Village West Gallery abutting White Eagle Hall.  She was assisted by Kristin DeAngelis, former owner of the sadly lost 107 Bowers Gallery, and current curator at a pair of Silverman properties which regularly host shows. Many of the most successful pop-ups on the eighth floor were those connected to local galleries: Drawing Rooms, for instance, provided a full bedroom of delights, including three striking grey-and-white pieces by frequent exhibitor Jill Scipione. The Art House, one of the most reliable institutions in town, contributed an entertaining chamber of their own. Many of the exhibitors have studios at MANA Contemporary, and MANA staff was on hand on the ninth floor, distributing material.

Some of the best, and most visible, figures in regional art were present, too: Megan Klim, with her unsettling amalgams of wire, fiber, and rust, Theda Sandiford, with her energetic tangles of multicolored rope, Cheryl Gross and her lurid illustrations of animals, Mustart, with his visual provocation, impeccable sense of balance, and collision of spray paint and magazine clippings. At the Hyatt (of all places) they were singing in harmony; odd harmonies, sure, but odd is good. It’s premature, perhaps, to call this evidence of a movement, but something brilliant is blooming in this town, and 14C is another sign of its florescence. Visual art in Jersey City has a tone and a feel, and a sense of humor, and fierce regional pride. And for the next two days, it has a home on the waterfront.