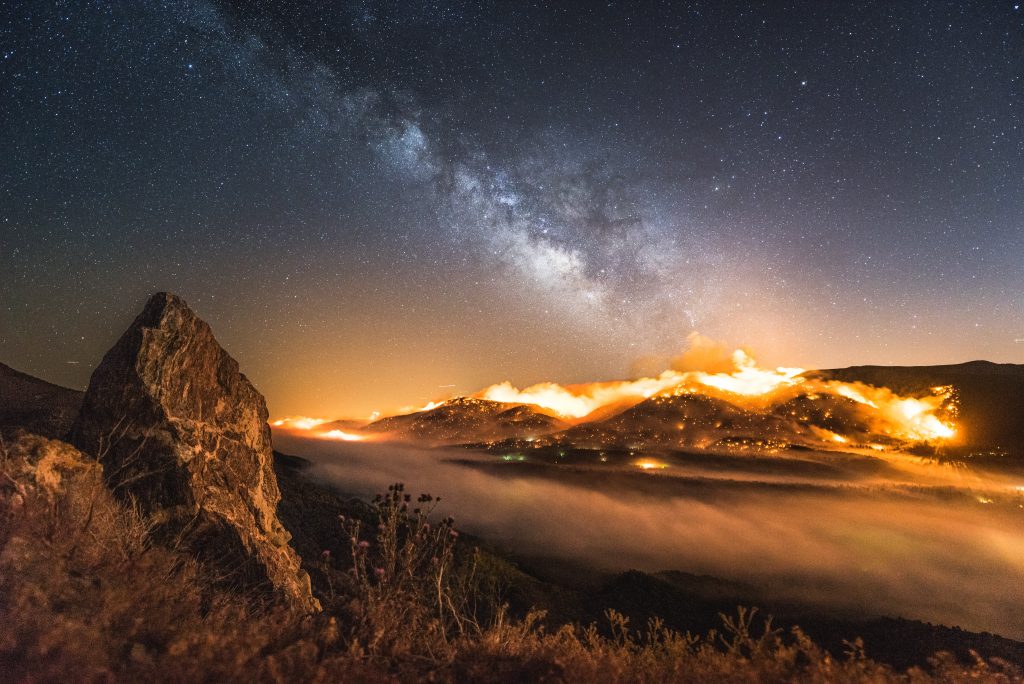 There are few things in the world less subtle or more graphic than a forest fire. The flames turn the landscape into an infernal vision that no painting or work of literature can hope to reproduce or approximate. Fires on the scale of those that have recently torched California are almost impossible to represent, or even to wrap our minds around: four and a half million acres, or more than four per cent of the entire Golden State, went up in smoke in 2020. Chances are, you’ve engaged with the news reports, or seen the brutal photographs, or just heard incredible stories from friends on the West Coast.

But should you really want to understand the sheer horror of California ablaze, you’re encouraged to head to MANA Contemporary (888 Newark Avenue) for “Implied Scale: Confronting the Enormity of Climate Change,” which will dominate the first floor of the gallery complex until July 22. Jeff Frost, one of five contributors to the show, has taken his camera so close to the conflagration that it’s a wonder that his lens didn’t melt. Frost took 350,000 photographs of the fires, and he projects them in an anxious rush, on a wide screen hanging in the darkness, employing a rapid-fire time-lapse technique that accelerates the encroachment of the flames and smoke. “California on Fire” is a portrait of a landscape that has turned, ferociously, on its inhabitants — the Golden State as an active volcano in the midst of a slow-motion eruption, throwing off the restrictive burden of civilization, torching roads and houses and fast-food restaurants, charring disposable containers and corporate logos, and catching some poor unlucky animals by the tail, too.

It’s hard to believe these images are real, but real they certainly are. Our immediate disbelief is part of what Frost is working with: he anticipates our astonishment, and keeps right on shocking us anyway. This is not a dystopian future but our world as we’ve made it. As an exercise in documentary realism, “California on Fire” is jaw-dropping; it’s also merciless, and relentless, and viciously pointed. Evidence of human overconsumption and overbuilding is everywhere in these shots, and, just in case the connections elude the viewer, Frost has included satellite footage of hurricanes churning away in the Atlantic. (He’s also organized his images according to the five stages of grief; putting a needle-fine point on things is part of the project.) Effective use of music and found sounds make “California on Fire” play like a cross between “Koyaanisqatsi” and William Kentridge’s speedy, hand-drawn, time-lapsed excoriations of human waste and folly. I could mention the excellent composition, color, and saturation, and near-lyrical balance of Frost’s photographs, but when the images fly by at this pace, meticulous attention to aesthetic detail feels like an insult to the polemical intentions of the artist.  This is not pretty or easy viewing, and that’s appropriate. In 2021, we do not inhabit a pretty or easy planet.

“California on Fire” isn’t even the roughest piece in the “Implied Scale” show. Even dedicated myrmecologists might have trouble countenancing the “War” segment of Catherine Chalmers’s graphic, unsparing, high-contrast film of rainforest ants on a bright white background.  Shorn of habitat, there’s nothing in the footage except pure combat — small ants swarming against larger ones, mandibles and twitching antennae in motion, expressions of insect distress uncomfortably visible. In another filmed sequence, Chalmers grants her stars access to a pile of leaves cut in the shape of English letters. In the interest of keeping this review spoiler-free, I won’t tell you the two words that the ants somehow manage to spell, but I am impressed by the filmmaker’s patience with her tiny charges, and her skill at making the monstrous and miniature feel disturbingly identifiable. Even the calmer pieces in “Implied Scale” speak straight to the conscience in a stern voice. Zaria Forman’s long aerial scroll of the Greenland ice sheet, projected on three gallery walls, might almost be calming in its placid whiteness were it not for the accompanying soundtrack: the pop and crackle of bubbles of gas trapped beneath the glaciers, and released after dormant centuries by climate change.

Those heavy human footsteps are audible throughout the exhibition. James Prosek, whose menagerie of animal silhouettes decorates the MANA lobby, presents a horizontal inkjet print of a photograph of dead birds retrieved from a museum archive, belly up and arranged by color. From a distance, it’s quite pretty; viewed up close, it’s an unsettling testament to our will to control animals by imposing classifications on them. What is the consequence of all of this sorting? The lifelessness of the birds — their objectification under the lens — speaks eloquently, and brutally, to that. In this context, even his gentler pieces, like a square canvas “Noah’s Ark” filled with silhouettes, and hanging mobiles suitable for a crib, feel like challenges to the viewer. There is no ambiguity at all about Ted Kim’s 70-foot mural drawn in sharpie directly on a MANA wall: his depiction of a tsunami of garbage that threatens to eclipse the sun and engulf the natural world.  It’s a Hokusai of modern horror, and an elaboration in black and white of the consequences of our own actions. Kim of drawn birds among the spools of wire and rabbits between the screens of discarded electronic equipment, but these playful touches only serve to amplify the threat.

These are treacherous and confusing days for artists.  The NFT whirlpool continues to drag creators of all kinds toward moral relativism, dangerous compromises with capital, and justifications of behavior that isn’t kind to the planet.  Even the most well-intentioned cultural activity has its cost in carbon.  Advocates must weigh the ecological cost of speaking out — even speaking out on behalf of ecological responsibility.  The five artists in “Implied Scale” seem to agree that there’s no time to waste: they’ve made pieces that come at the problems as forcefully and as fully as they can, even at the risk of destabilizing the viewer.  These works are a collective shout at humanity.  I’m afraid we deserve it.