Women on Wheels: How Women Found Freedom through Bicycling 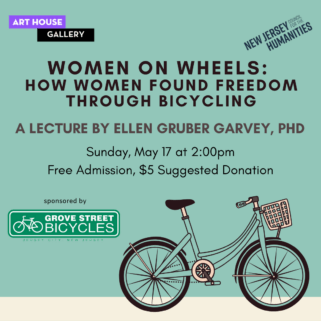 This event is free, but advance reservations are recommended as seating is limited. Suggested donation $5.

Is it surprising that in the 1890s conservatives panicked at visions of women riding alone, with other women, or with unsuitable men, and campaigned to stop them? Some claimed that women would damage themselves by acquiring a “bicycle face,” or would get sexual pleasure from bicycling — and thus ruin their reproductive capacities. When women and girls first rode bicycles in large numbers, they celebrated their new freedom to move around in the world. Susan B. Anthony thought bicycling had “done more to emancipate women than anything else in the world.” Other suffragists praised bicycling as a road to fuller citizenship for women: women would travel more widely on their own, and would learn a larger sense of responsibility to their fellow travelers.

This program was made possible by a grant from the New Jersey Council for the Humanities, a state partner of the National Endowment for the Humanities. Any views, findings, conclusions or recommendations expressed in this program do not necessarily represent those of the NEH or NJCH.