“Such Much?” Casablanca, Hitler’s Refugees, and the Hollywood Screen 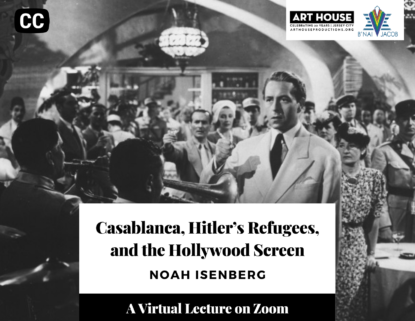 A Virtual Lecture by Noah Isenberg

Suggested donation $5. Advance registration required to receive the Zoom link. This event will have closed captions.

Although the legendary, award-winning Hollywood picture Casablanca (1942) has been called “everyone’s favorite émigré film,” in the memorable quip by the late film scholar Thomas Elsaesser, rarely is it discussed in this vein. Drawing on extensive research undertaken for his best-selling book We’ll Always Have Casablanca: The Life, Legend, and Afterlife of Hollywood’s Most Beloved Movie (W.W. Norton, 2017; paperback 2018), Noah Isenberg seeks to shed new light on this often neglected aspect—refocusing attention on the dozens of refugees at work on both sides of the camera; on the strangely evocative if also veiled commentary on historical events; and on the furtive references to Jews and other targets of Nazi persecution. One of the all-time most cherished love stories and wartime dramas of the studio era may also be seen as one of the earliest and most successful feature films to address the menace of National Socialism, the flight of European refugees, and the personal stories embodied in even the most minor characters portrayed on screen.

Attendees are encouraged to watch Casablanca before the lecture. Click here to find out where to rent and/or stream it.

Still I Rise Exhibition Casablanca, Hitler’s Refugees, and the Hollywood Screen
Scroll to top
Subscribe to Our Newsletter