Carol & Chrissy: Live in the Parlour 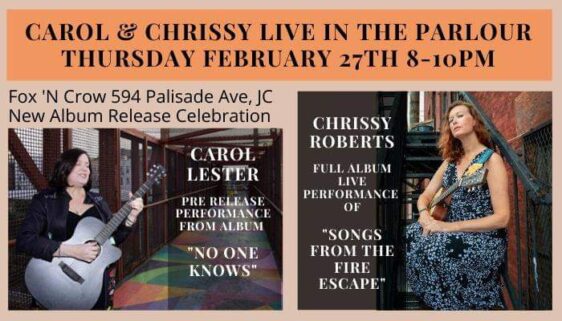 Come out for a night of wonderful new album celebration with two local songwriters:
Chrissy Roberts and Carol Lester

Chrissy Roberts is a self taught guitarist who has been writing songs for over 20 years. Her latest project “Songs on the Fire Escape”, released in November 2019 (and available on all digital platforms) combines a combination of the genres she has grown to love. From folk to jazz to pop to a spiritual tune, this album has it all. Chrissy borrows singing technique from years of singing as a church soloist whcich she continues to do in her home parish in Westwood NJ. Chrissy’s guitar picking style is matched by none, with her ability to obtain precision notes with a flat pick for extra clarity. Chrissy also loves sharing her love of music with children and performs her original Kid Notes music at festivals and in classrooms.
photo credit Barbara Beeman
www.chrissyroberts.com

Carol Lester is excited to celebrate the arrival of her 13 song Pop Folk & Indie Rock full length album “No One Knows” Live in The Parlor at Fox and Crow. The CDs ? arrived just in time for the 2/27, 8pm Fox and Crow release party!
“No One Knows” is Ms Lester’s 4th Adult Contemporary album release (she’s also got three children’s albums) Earlier albums a few singles are up on Spotify & CDBaby. https://open.spotify.com/artist/4oTOWrqo59NFe7RZ2ZK3Cm?si=mlSXK401RRq9Px6np5j4Fg

Carol will borrow Chrissy’s keyboard to play a few piano songs (No One Knows that she plays piano!) Her band will join her in the rockier songs: Peter Moffitt: keys, flute, cello; Vivian Warfield: world percussion; Gerry Griffin on bass. Pop Folk and Jazzy Indie Rock.

Two songs from the CD have been accepted into LHM Music Catalogue for Film, TV, Ads. The title track “No One Knows” is getting great reviews by LA Music Supervisors and was Iauded by Reg E Gaines poet, lyricist and Grammy nominated songwriter for Broadway’s “Bring in Da Noise Bring in Da Funk”. There will be a few sample copies of a ‘lyrics and line drawings’ a full book of album lyrics to accompany this album release