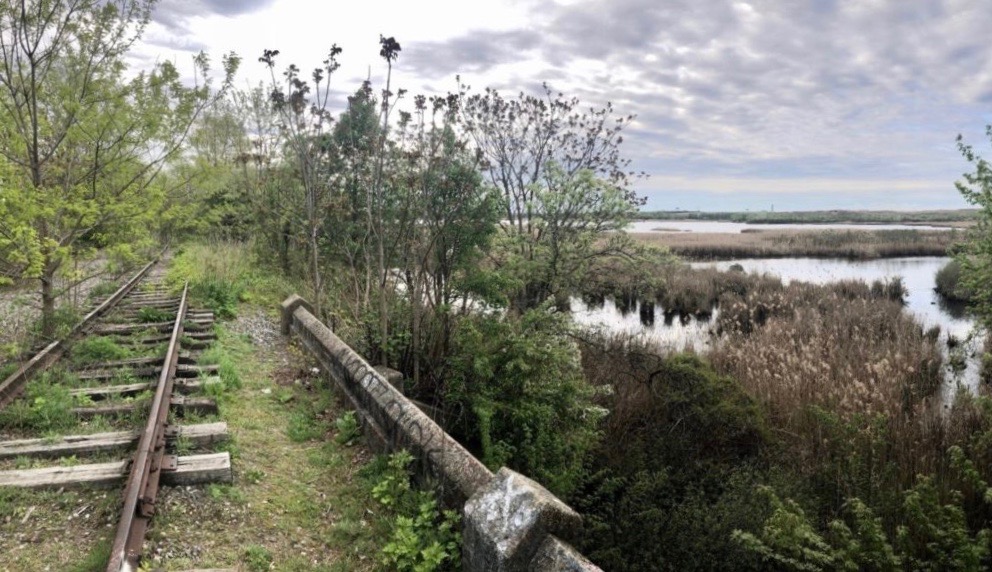 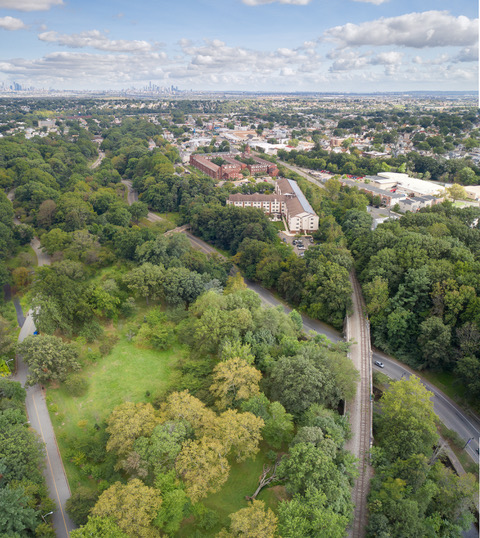 Unless the governor acts by January 2022, advocates warn, the current owner, Norfolk Southern Railway, can sell its property piecemeal and the long-talked-about Essex-Hudson Greenway will be just another lost opportunity for hikers and cyclists.

The proposed greenway would follow the right-of-way of the eastern portion of the former New York and Greenwood Lake Railway beginning in Montclair and running through Glen Ridge, Bloomfield, Belleville, Newark, Kearny, and Secaucus before terminating in Jersey City.

Passenger service on this portion of the line ended in 2002 when NJ Transit diverted Boonton Line trains bound for Hoboken and Penn Station, NY, to its Morris and Essex Line in Montclair. The right-of-way is currently owned by Norfolk Southern, which continued to provide freight service on that line until 2015.

On a June 30 edition of WGBO/WNYC public radio’s “Ask the Governor” program, a Bloomfield caller asked Murphy about the proposed land acquisition via a possible loan from the New Jersey Infrastructure Bank.

Murphy hedged. He said he was “open-minded” to the idea, citing the state’s high density and the public’s increased need for outdoor respite  in the context of a pandemic. But he said he still needed to “follow up with our policy folks to kick around what we think we have to do to get over that goal line if we chose to.”

Murphy also mentioned “some NJ Transit wrinkles” that some observers speculate involve the agency’s possible expansion of its light rail line along the old Norfolk and Southern line.

Reaction to the governor’s tepid endorsement of the project in an election year ranged from hopeful to impatient.

Debra Kagan, executive director of New Jersey Bike & Walk Coalition, said, “We are encouraged by the recent public support of the governor and are looking forward to working with his administration to identify a funding package to bring this project to fruition.”

Patrick Conlon, president of Bike JC, offered this take: “Bike JC feels strongly that Gov. Murphy should stand up and be counted as an unwavering supporter of the Essex-Hudson Greenway and get moving on putting together the funding support for this brand new transportation infrastructure that stands to benefit the most densely populated region of New Jersey.

“We believe the environmental, health and economic benefits will so vastly outweigh the upfront costs that it’s actually a waste of taxpayer dollars to not make the investment. If the governor feels this might be politically difficult at this time, it makes more sense to us for him to speak strongly about it and help educate the public about the benefits and not lose this unique opportunity.”

In a recent “Action Alert” posted on its website, the New Jersey Chapter of the Sierra Club cautioned that “New Jersey leaders are letting the opportunity for the Greenway project slip away. … Many people living near this proposed project don’t have access to parks or even backyards. This Greenway project will help connect these urban areas and will provide a place for children and adults to enjoy nature … and would allow people to walk or bike between parks like Branch Brook Park (in Newark), Belleville Park and Laurel Hill Park (in Secaucus).”

And Debra Italiano, founder of Sustainable JC, added this: “The Essex-Hudson Greenway is an important project for both counties, offering solutions for conservation and improving public health while providing a safe, traffic-free and emissions-free transportation option. It is also a key corridor to advance the connections for completing the East Coast Greenway through Jersey City.” Italiano said Greenway supporters “are working together to identify a funding package to complete the acquisition of the property before the deadline of January 2022.”

Open Space Institute, a nonprofit that has spearheaded protection of 2.3 million acres of land from Quebec to Florida over the four decades, has led the effort — along with NJ Bike & Walk Coalition and the 9/11 National Memorial Trail alliance — to make the Essex-Hudson Greenway a reality.

In 2020, the national Surface Transportation Board permitted Norfolk Southern to abandon the former freight line and convey its right-of-way to the OSI after the nonprofit in January 2020 successfully negotiated a “time-limited” agreement to purchase the right-of-way for $65 million. In January 2021, the parties agreed to a one-year extension of the purchase agreement.

That extension will lapse in January 2022, according to Eileen Larabee, an OSI representative authorized to speak for the Greenway coalition, unless OSI can button down a financing mechanism to facilitate the purchase.

Where will the money come from?

State records released via an OPRA request show that a loan application was filed this past March with the New Jersey Infrastructure Bank by the Hudson County Planning Division on behalf of a “partnership consisting of Hudson County, Essex County and the Open Space Institute” requesting more than $150 million for the Greenway project.

According to an OSI posting on www.essexhudsongreenway.org, the loan “would finance $65 million for purchase and $90 million for site development. It is proposed that these loans be repaid over the next 30 years through funds from the Realty Transfer Fund (RTF) that had been used for land protection under the sunsetting Highlands Act.” 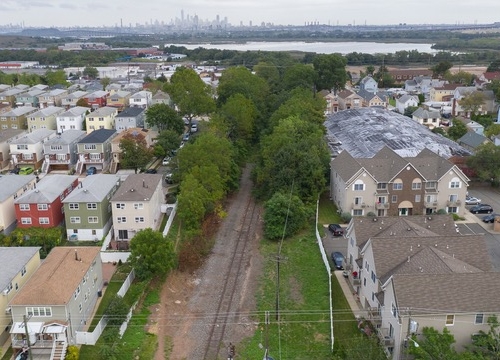 But, OSI warns, “if the state does not act with the (Infrastructure) Bank by the beginning of July (2021), the funds will be reallocated to other projects and the RTF will be absorbed into the general fund.”

So where does Murphy stand on the I-Bank financing plan?

“The I-Bank plan is not his preferred plan,” Larabee said. “He’s indicated he’s looking at possible alternative plans, [and] if there are other alternatives favored by him, we’re open to that.”

Absent some financing vehicle, Larabee said, Norfolk Southern “is free to start selling off the property, and hopes for the Greenway will be no more.”

Exactly what improvements will be required to facilitate development of the Greenway?  The application filed by Hudson County Planning Division lacks a detailed breakdown of specific work items or associated work cost dollar projections and notes an “initial design” plan won’t be ready until May 2022 with construction expected to start by Sept. 1, 2022.

The application does anticipate “installation of state-of-the-art ‘green infrastructure’” to help prevent stormwater sewer discharges into the Passaic and Hackensack Rivers during heavy rainfalls. It also lists “high visibility markings and signs,” along with “street lighting” and a “pedestrian bridge/tunnel” as likely components.

It also says the Greenway project “will improve the overall safety for bicyclers” but doesn’t explain how. It says the project will “host activities that will complement the greenway.” Again, however, it doesn’t elaborate.

According to the application, the project will be a shot in the arm for the regional economy emerging from the pandemic. It should “generate 11–14 jobs per million dollars spent” and, it adds, “already, hundreds of thousands of dollars are being invested in planning, surveying, environmental assessments and more.”

As Greenway proponents await the governor’s decision, Larabee remains optimistic that continuing public pressure for the project will carry the day.

“We’ve not only been working with our partners, NJ Bike & Walk Coalition and the September 11 Memorial Trail organization, but there is also a broad coalition of more than 100 entities including local business and civic leaders, religious groups, environmental and public transportation advocates, all of whom are in favor of this project,” she said.

“We’ve been actively encouraging people to contact the governor, and the public has responded with some 5,000 letters and phone calls in support of the Greenway,” Larabee said.

Some legislators have pointed out that Governor Phil Murphy has shown little reluctance to fund projects that he favors, noting that the state budget has increased by almost 35 percent under his watch. New Jersey’s $46 billion 2022 budget contains $24 million in spending for the Jersey City Pompidou museum announced by Murphy and Jersey City Mayor Steven Fulop on June 4. 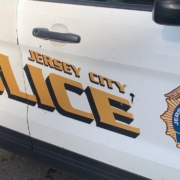