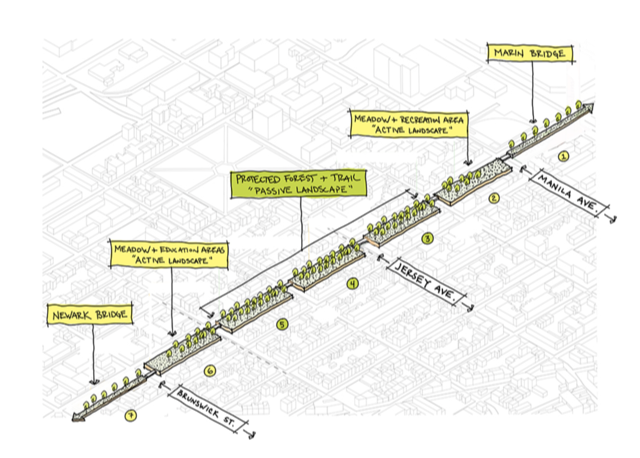 The Jersey City Division of Planning will hold a public meeting Wednesday, Sept. 7 at 6:30 p.m., the second in a series of meetings on the draft Redevelopment Plan for the 6th Street Embankment downtown.

Wednesday night’s meeting, which requires preregistration to attend and which will feature a Q&A session at the end, will be virtual.

The meeting will focus on a plan for the stretch between Manila Avenue and the I-78 overpass, where the majority of public open space will be located, according to a spokesperson for the Embankment Preservation Coalition, the local group that has spearheaded preservation and conservation efforts. Also to be discussed is a proposed building on “Block 7,” which runs from Brunswick Street to (approximately) the intersection of Division Street and Newark Avenue.

The Embankment Coalition, a nonprofit group advocating for the creation of a park atop the abandoned railway along Sixth Street downtown, and its partners have been working to convert the Sixth Street Embankment to a greenway for seventeen years.

The Coalition, Rails to Trails Conservancy, and the City of Jersey City –  partners in litigation before the Surface Transportation Board – suffered a temporary setback recently when the federal agency rejected their claim that Conrail had illegally taken steps to evade a federally mandated review process of historic assets. However, the group is forging ahead in anticipation of a settlement and the groups’ lawyer is confident that the decision will be reversed on appeal.

The Coalition points out that abandoned rail lines have become “ecological corridors with naturally seeded forest and meadows” that oxygenate and cool the air, sequester carbon, capture stormwater, and provide a habitat for wildlife.

Album Review: “For Executive Meeting” by The Paranoid Style