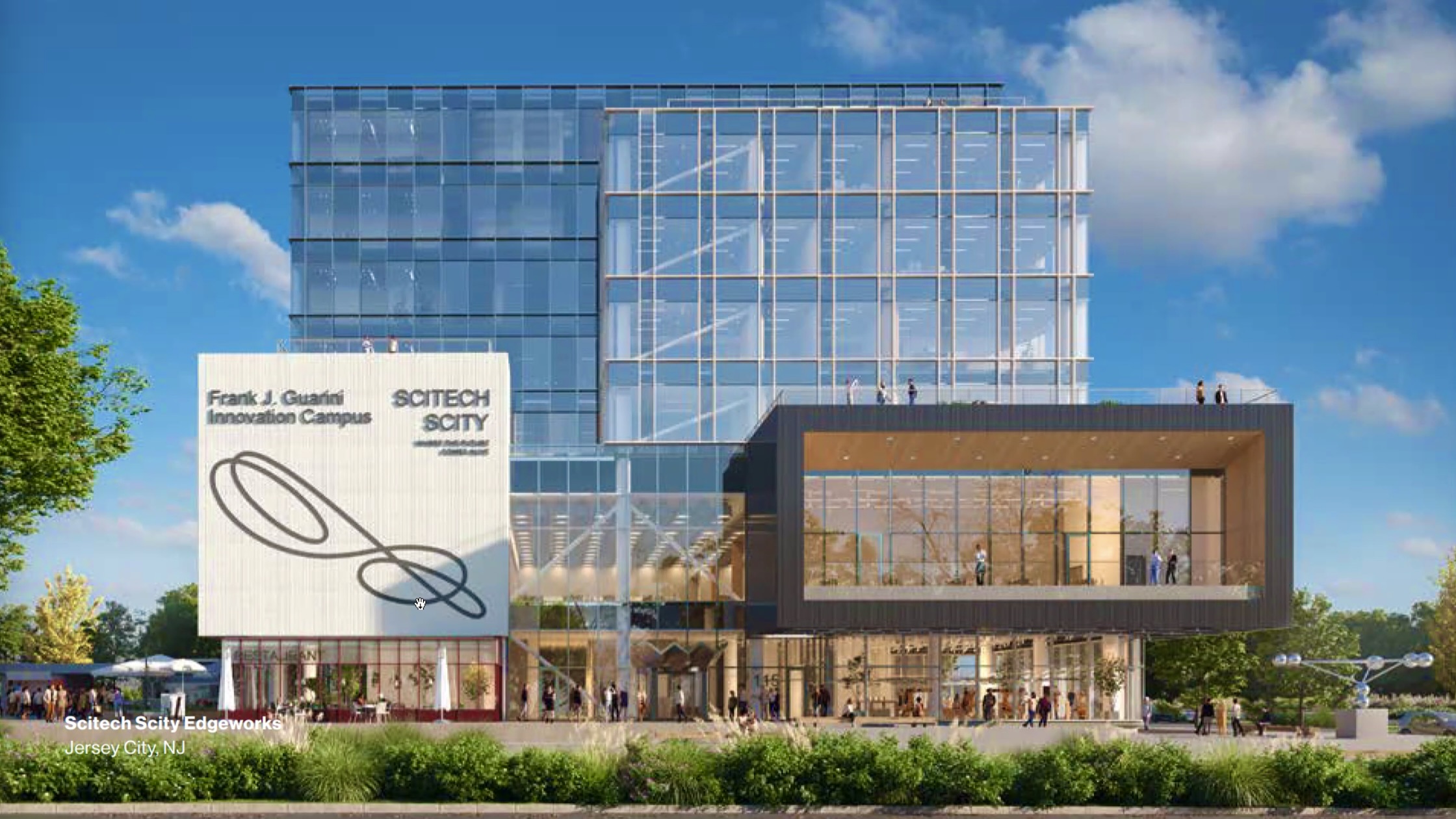 In a marathon six-hour session last night, the Jersey City Planning Board gave the green light to two massive projects in the Lafayette neighborhood.

The board voted to approve a subdivision and site plan for the first phase of “SciTech Scity.” The approval will allow the developer to move ahead with the construction of “Edge Works,” a 100,000 square foot building that will house a 40,000 square foot “state-of-the-art conference center and bleeding-edge tech exhibition gallery,” and 60,000 square feet of “research and development labs, workspaces, and co-working areas for dozens of start-ups plus skunkworks suites, product showcases, consumer testing labs, and offices for select well-established companies.”

The $300 million, 30-acre project that sits next to Liberty State Park will also include a high school, housing, and a public commons. The first phase is slated to open in late 2023.

While speakers at last night’s hearing were overwhelmingly supportive of the project overall, several complained about a lack of diversity on the board of SciTech Scity LLC, the not-for-profit developer of the project.

While calling it “a wonderful project,” President of the Morris Canal Community Development Corporation June Jones noted that “Lafayette is the oldest African-American community in the state of New Jersey. There is no recognition or inclusion of African-Americans, black or brown people. Even the board members do not reflect us.”

Others complained that Edge Works’ name does not reflect Lafayette’s history.

Ward F Councilman-elect Frank Gilmore lamented the fact that, as the local councilman, he would occupy only an honorary board seat. “I’m really asking that we table this so we can begin to have real conversations … as it relates to this project.”

Commissioner Jeffrey Allen, said, “This is a beautiful project … but I’m going to have to vote no.” Allen is the board’s sole Black member.

Phase one of SciTech Scity was approved 4-1.

Also on the agenda was Morris Canal Park Manor, a 361-unit luxury high-rise at the former “Steel Tech” factory at 417 Communipaw Avenue.

Since its announcement, the project has been mired in controversy.

The land, originally slated to become part of Berry Lane Park, was sold to developer Skyline Development Group after the city passed on its acquisition. In a package negotiated by former Ward F Councilman Jermaine Robinson, Skyline agreed to include a 22,000-square-foot, two-story structure with a gym, rock climbing wall, sauna, dance studios, music studios, and food concession as well as computer labs and classrooms for STEM instruction. Also to be included were eight “incubator” commercial working spaces for minority business enterprises. 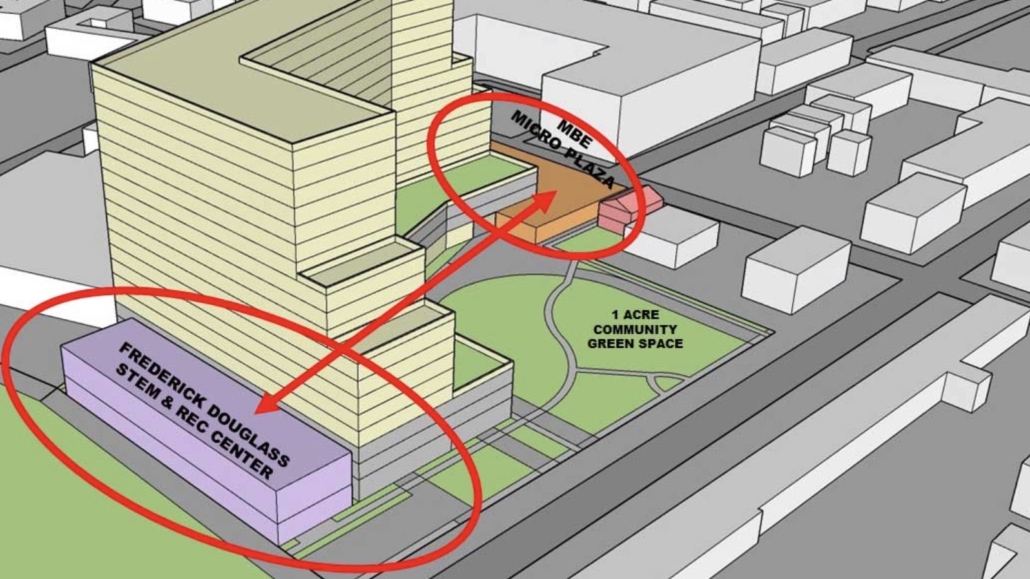 Critics, however, objected to the the fact that only eighteen of the residential units would qualify as affordable. They also decried its size in a neighborhood characterized by one- and two-family homes.

In spite of the neighborhood’s concerns, in December of last year the City Council voted to amend the Morris Canal Redevelopment Plan to allow the project to move ahead. Following the vote, Morris Canal Community Development Corporation filed suit, and in August 2021 a judge sent the matter back to the Planning Board to explain how the project was consistent with the city’s master plan.

City Planner Matt Ward was called as a witness by the Planning Board and, in a 24-minute PowerPoint presentation, went through each of the master plan’s objectives and how, in his view, the amendment to the redevelopment plan and the project furthered the master plan’s objectives. In conclusion, Ward said, “The amendments to the Morris Canal Redevelopment Plan are consistent with the policy goals and objectives of the 2000 Jersey City Master Plan.”

Attorney Bill Matsikoudis, who represented the MCCDC in court, cross-examined Ward. “The existing housing stock in the neighborhood … is it more one- and two-family homes as opposed to 17-story, 400-unit buildings?” he asked. “Right up the hill is a 13-story senior facility,” said Ward. “The other general area there is … low density residential … it really depends on what you’re calling ‘the area.'”

“Can you agree with me, yes or no, that the density, height, size, and scope of the project is out of scope with the existing houses, yes or no?” asked Matsikoudis. “They are not the same,” said Ward. But Ward argued that the goal of locating high density housing in walking distance to public transportation should be “weighted much more heavily” when balancing the goals of the master plan.

Matsikoudis read from the master plan, which provides that “the scale of new development should be consistent with the neighborhood” and said, “I would assert that this 17-story building is completely out of the character of this neighborhood.”

Matsikoudis argued that the project failed to achieve the master plan’s objective of increasing the ratio of owner occupied housing to rental housing or to achieving “context-sensitive growth and development.”

Ward agreed with Matsikoudis that the land was identified on the “land use map” on the master plan as open space but argued that the gym and pedestrian areas in the project, qualified as such. Matsikoudis shot back, “So, if we put 500 apartment buildings in Liberty State Park and they had a lawn and a gym, the way you define open space, that would still be a park.”

He continued: “We saw a land use map that calls for this piece of land to be open space and park, not a 17-story building. To me … this is an inconsistency with the master plan. Before you give the developer the right to do that, you should know whether or not the acquisition of this land was truly not doable for the city. Otherwise, I think you are making an arbitrary decision.”

Resident Erika Walker called in. “Affordability is important to me and my peers. This deal was done under the framework of the current IZO, which is unlawful.”

Concerned about setting a precedent, resident Michael Griffin suggested that, if the developer reduced the number of dwellings, the city would require fewer give backs, and the project would be smaller and therefore more in keeping with the community’s look and feel. “I don’t think we should compromise the aesthetics of our community with a 17-story building … in an area where the majority is one or two families.”

At the conclusion of the hearing, Chairman Langston spoke for the board. He rattled off several features of the plan, including its density, the business incubator, the pedestrian plaza, the affordable units, the proximity to the light rail, and the preservation of part of the Steel Tech facility. “There are inconstancies in the master plan. If we go through a 700 page document, I’m sure we’ll find inconsistencies. It’s crystal clear that this redevelopment plan hits those goals.”

The Board voted unanimously to send the redevelopment plan amendments to the City Council for approval.