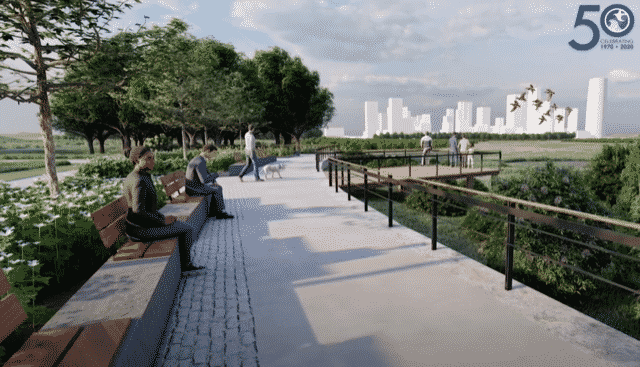 The New Jersey Department of Environmental Protection (DEP) has released a design concept for the restoration of the interior of Liberty State Park. First presented in a virtual meeting on Tuesday night, the presentation is now available online.

Two hundred thirty four acres of the interior will be opened. The proposed plan would turn 75 of the acres into separate saltwater and fresh water wetlands that would provide fish and wildlife habitat and protect the city from storm surges like the one that occurred during Superstorm Sandy in 2012; and 133 acres into multi-use trails and large manicured lawns that would serve as scenic overlooks, play areas, and places where families could picnic. In addition, the plan would create five new park entrances to provide greater access to the community, two new parking areas (near the entrances), and active recreation at up to three places outside the ecological restoration area.

The future of the park’s interior became a hot topic over the summer with the emergence of the group, “Liberty State Park For All,” funded by billionaire and Liberty National Golf Course owner Paul Fireman. The group’s creation coincided with Fireman’s efforts to insert a provision into the Liberty State Park Protection Act that effectively exempts a 22-acre piece of land in the park known as Caven Point from the Act’s protections. Fireman has sought to make the wildlife sanctuary into part of the golf course, a move that has met with stiff opposition from politicians, environmental groups, and Jersey City residents.

In July, Liberty State Park For All distributed an incendiary flyer entitled “Broken Promises of Liberty State Park” with the slogan “White Silence = White Violence.”  The flyer suggested that Jersey City’s Black community had been deliberately excluded from decisions affecting the park. The handout also implied that unidentified actors had prevented a cleanup of the contaminated interior of the park and had either privatized or prevented the construction of recreational amenities such as ballfields that could be used by people of color. The group Friends of Liberty State Park, which has opposed Fireman’s efforts, was assumed to the primary target of the flyer.

Friends of Liberty State Park has forcefully pushed back against the Fireman-sponsored group’s claims. Speaking with Jersey City Times, FOLSP founder and president Sam Pesin disputed the claim that it had opposed adding ballfields or that the matter had anything to do with the remediation efforts. According to Pesin, his father Morris, who is credited as the driving force behind the park’s creation, favored a “Central Park-type future,” i.e., that the park would include athletic fields and small concessions. FOLSP has always supported that vision, he told Jersey City Times. Another supporter of FOLSP, Ward F resident Daoud David Williams, who is also a member of the NAACP, told Jersey City Times that “it is disgusting that they want to racialize this. They are co-opting Black Lives Matter. They want to pretend that they are representative of the community.”

The DEP’s plan has been greeted with cautious optimism by Liberty State Park For All. In a statement to the Jersey Journal, Executive Director Arnold Stovell said “While I am still looking through the details of the plan, what we saw last night was encouraging at first glance. That said—and as was mentioned many times last night—we have heard these kinds of promises before.” He added that they “will continue to push for a cleanup at the park that is consistent with standards used in white communities and for active recreation.”

For his part, Pesin released the following statement. “LSP’s future is very bright with this visionary plan 25 years in-the-making, interior nature plan with trails, with the DEP’s commitment to active recreation and other improvements, and with the essential LSP Protection Act needing to become law to end privatization battles. The varied nature habitats will inspire urban residents and all visitors, provide special opportunities for urban youth environmental education and also for eco-tourism. The DEP’s protective and legally required remediation plan, the establishment of active recreation, and the DEP’s commitment to transparency and ongoing collaboration pulls the rug out from the lies and propaganda of Liberty National Golf Course owner Paul Fireman and his paid surrogates with his ulterior motive of privatizing LSP’s Caven Point Natural Area for multi-millionaire golfers.”

The DEP is asking that people view the presentation, take the survey, and share their thoughts on the future of Liberty State Park.

Participate in the planning by taking a survey by November 6: https://www.surveymonkey.com/r/B7H3FGJ

If unable to submit a survey, email your comments to lspinterior@dep.nj.gov.