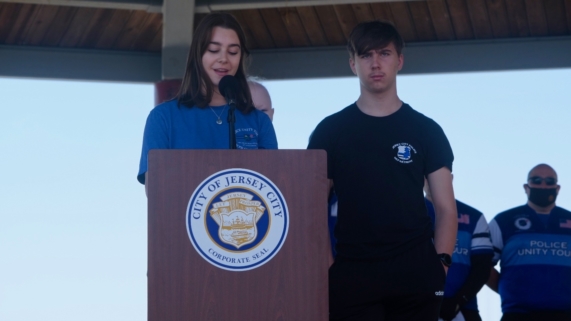 Under a brilliant blue sky a brave daughter paid tribute to her fallen father this morning before a somber assemblage of police officers and dignitaries. The hundreds in attendance gathered on J. Owen Grundy Pier to send off a pack of bike-riding cops to raise money for the National Law Enforcement Officer’s Memorial and Museum on the “Police Unity Tour.” Fifty Jersey City police officers would join others from the region and ride to Washington D.C. to raise awareness of law enforcement officers who have died in the line of duty.

During an early morning operation in 2009 to arrest suspects in an armed robbery, the young woman’s father, MarcAnthony DiNardo, was killed. His eldest daughter, Gwen, only four years old at the time, was now here to tell everyone why the memorial meant so much to him and now, tragically, to them.

Standing next to her were her younger brother and sister, MarcAnthony and Ella. They were too young, she said, to remember their father. But they have photos and their mother’s memories. And that’s what she wanted to share.

“In May of 2009, my father went to National Police Week for his first and what would turn out to be his only time. My mom had told me that he would call every day to check up on us and tell her how it was. He talked about the memorials left by the police departments and by the families of loved ones killed. After coming back from National Police Week, my dad decided that he wanted to participate in the Unity Tour for the following year. He had told my mom how we were going to follow him down in the DiNardo family fun mobile. That’s what he would call our minivan.”

“Little did we know that only two months after my dad went to police week, we would end up going there but for all the wrong reasons…Two months after he returned from National Police Week, five police officers were shot in Jersey City, my dad being the only fatality. We found out later that my dad had arrested him in the past for possession of illegal firearms. That criminal was out of prison early, stole more guns, and returned to his life of crime where he used an illegal firearm to shoot and kill my dad. On July 19, 2010, my dad was pronounced brain dead. Our family agreed to donate his organs.”

“Every year, my mom, brother, sister, and I drive down to D.C. I hope to be able to ride down to D.C. in three years with the Police Unity Tour.”

Group to Map “Heat Islands” in Greenville and Bergen-Lafayette