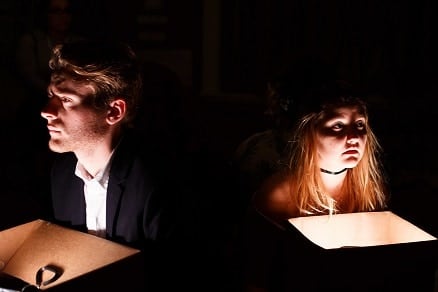 That’s the opinion of one entertainment expert anyway.

John McEwen, executive director of the New Jersey State Theatre Alliance, believes that Jersey City is offering something special on stage as well as in music and art.

“There’s something there for everybody,” McEwen says, “due in large part to exciting cultural offerings.

“The heartbeat there is similar to what you might find in the Village in New York. There’s a young, vibrant feeling there. The city’s image has turned around quite a bit, artists are finding homes, theater organizations are cropping up and doing unique work that fits into that vibe. I do hear a lot of people talking about the arts in Jersey City. Art is making that city tick. A lot of businesses are moving in, there’s a sense of pride in the residents, and that will only grow in time.”

Back at the turn of the twentieth century, Jersey City was home to professional vaudeville houses, like the old eight-tier Majestic Theatre that once stood opposite City Hall, where even New Yorkers trooped to see luminaries like W.C. Fields, George Burns, Groucho Marx, Fanny Brice, and George M. Cohan tread the boards.

But what—at least for now—may be missing in terms of infrastructure and top-name billing is being compensated for by the vibrancy and innovation of the many theatrical companies and their offerings.

As city Cultural Affairs Director Christine Goodman sees it, these and other local companies are delivering “fresh, vibrant, immersive, and original new takes on timeless tales.”

It’s that kind of theatrical fare that’s more likely to draw regional audiences than not, Goodman says. “You can only see the Rockettes so many times before wanting to see something different, and the work being produced here is different and exciting, and it’s something we’re proud of.”

That being said, the companies that are making a go of it now didn’t pop up overnight: It took each of them time to find and secure performance space, a distinct identity and audience, and monetary support before they could start to breathe and contemplate a sustainable future.

For Olga Levina, co-founder and artistic director of Jersey City Theater Center (JCTC), the long and winding path to Jersey City began in Belarus where she “grew up with a love for theater” fostered by her mother, a professional actress.

She and her nonprofit company (founded in 2006) are located on the second floor of a converted warehouse at 339-345 Newark Ave. that houses a 1,500-square-foot flex-performance space, a black box theater, an art gallery, and 10 private art studios all supported by an annual operating budget of $250,000.

JCTC’s mission, according to Levina, is to stage “political” theater and other arts events by developing a “thematic series concept … global in scope and relevant to the community.” In addition to plays, JCTC puts on arts shows, dance performances, and readings. Themes the company explores include justice, happiness, origins, vanity, borders, disruption, and fear.

Levina has hosted groups from Italy, Slovakia, Poland and Spain along with regional artists. JCTC’s most recent theatrical offering, Lines in the Dust, by Pulitzer Prize-nominated writer Nikkole Salter, was co-produced with New Jersey City University and was a contemporary look at race, class and inequality in public education.

Another upcoming JCTC production, Run-On Sentence, by New Jersey playwright Stacie Lents, is about women in prison. Lents based her work on her experience working with incarcerated women through Prison Performing Arts of St. Louis, Mo.

From its humble beginnings in 2001 in a makeshift space at the (now-demolished) St. Francis Hospital in Hamilton Park, to its roomy digs at Cast Iron Lofts on 17th St., Art House has established itself as a steadfast producer of performing and visual arts. 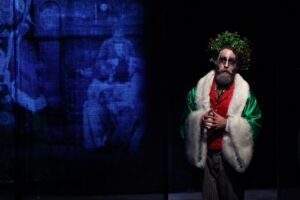 Among the more recent stage productions it has hosted are The Box Show featuring writer/performer Dominique Salerno and no fewer than 30 characters; The Artemisia’s Intent, created and performed by The Anthropologists, depicting—largely through movement—the life, work and words of 17th century painter Artemisia Gentileschi; and Reid Farrington’s A Christmas Carol, a co-production of Art House and Foxy Films, described as a “live mash-up of nearly every movie version of the Dickens piece ever made.”

“We present work that straddles the accessible and the avant-garde,” said Art House Executive Director Meredith Burns. The company’s focus, she said, is “to find diverse works by women and artists of color wherever possible.” Theatrical pieces like A Christmas Carol that feature projections and multi-media effects are also invited. “A lot of our pieces have that bent,” Burns said.

The non-profit venture, which employs two full-time staffers and runs on a yearly operating budget that Burns puts at “just under $500,000,” also sponsors “JC Fridays,” a quarterly seasonal arts festival that features between 30 and 50 events at different venues citywide;  comedy and dance festivals; and INKubator New Play Festival that invites submissions of new works by emerging playwrights from which six are picked for production every May.

Art House is on schedule for yet another move in fall 2021 to the new residential tower going up at 184 Morgan St., just one-half block from the Grove Street PATH Station. There it will hold forth with a 99-seat flex-box theater, art gallery, and administrative offices.

Two other local theater companies that use various performance venues are Speranza Theatre Company and No Dominion Theatre Co.

Speranza has two full-time and one part-time employee and operates  from Journal Square with a $50,000 annual budget.  The company’s mission is “to create thought-provoking collaborative theater centered on women’s issues, providing an opportunity for artists, particularly females, to share their voices through challenging and entertaining theater based in honesty and truth.” They have been around since 2008.

Heather Wahl, Speranza’s founding artistic director, said the company’s priority is to hire 50% or more women artists to perform, write and/or design. “I don’t think a lot of theater companies have our focus,” she said. “Most of what we do is original work primarily by women.”

Among those is Diana Basmajian, whose works Seasoned and Foodies were produced by Speranza recently.

Wahl said Speranza’s biggest challenge is “finding people of color” to participate. “That voice has been missing, and that was disappointing,” she said.

Despite having no permanent home, “Jersey City welcomed us right away,” Wahl said. Both Art House and JCTC made available their spaces to Speranza and the company has also performed in local colleges, eateries, galleries and even the historic Apple Tree House on Van Wagenen Avenue. “We created collaborations that have helped us grow and kept our overhead low,” said Wahl. 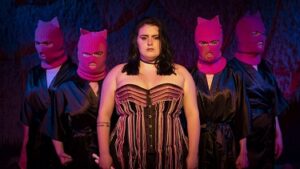 No Dominion co-founder and artistic director Michael Joel said the company (which takes its name from the Dylan Thomas poem “And death shall have no dominion”) sprang from an undertaking by several Montclair State University alums (himself included) to form a theatrical troupe.

Joel and No Dominion co-founder and executive director Kaitlin Overton believe that original theater is the way to go to promote new works in the New Jersey/New York City region. “By cross-collaborating with and fostering artists of multiple unique mediums, we are able to create the type of work that engages, inspires, and thrills diverse audiences,” they say. Much of that work, said Joel, has taken on a political flavor, “given the current state of affairs.”

Registered as a nonprofit in 2015, the group has done story slams citywide as part of the NEA Big Read program and “things sort of snowballed from there,” Joel said. The company recently partnered with McCarter Theatre Center and Princeton Public Library to bring a “story lounge” there and created a theatre slam at JCTC, where it is in residency.

For the new year, the company has big plans: an original opera in the summer and a six-hour political drama penned by Joel that, he said, will be “largely based on the 2016 [presidential] election” in November.

Another theater group, JCity Theater, has been around for over ten years staging a combination of plays by known playwrights such as David Mamet and works by emerging writers. They are also known for their annual holiday show A Tuna Christmas.  Unfortunately, as the founders Clay and Sandy Cockrell are currently on vacation off the grid, Jersey City Times was unable to make contact with them.

For example, Hulings said, the recent restoration of the old White Eagle Hall on Newark Avenue has afforded Jersey City a space for presenting special arts-related events and, she added, the county “is finalizing a 10-year cultural development plan” to pinpoint other opportunities for “finding a host facility or pop-up location” that could support theatrical ventures.

Art Review: Works by Nathan Sullivan, Diana Godfrey and Robert Glisson at the...
Scroll to top