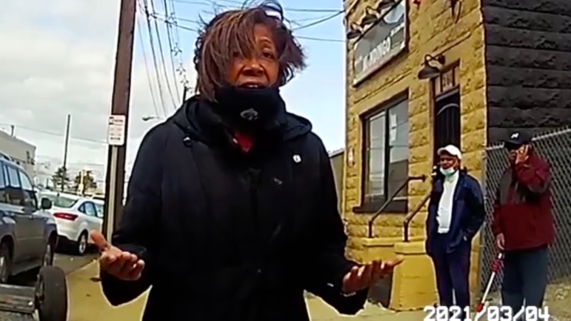 Cunningham had allegedly just sideswiped two vehicles while traveling westbound on Culver Avenue, when the police subjected her to a sobriety test.  The following exchange took place:

Officer: “Ma’am, I need to stand with your right foot in front of your left foot.”

Cunningham: “Do you mind if I ask you a question?”

Officer: “Absolutely, go ahead. What was the question?”

Cunningham: “I wanted to know if Director Shea [beeping sound]”

Officer: “What does Director Shea have to do with anything right now?”

Cunningham: “Well, ’cause I can see that you’re looking for something that isn’t there.”

Officer: “So Director Shea has zero to do with this stop though right now ma’am. OK?

Officer: “So I need you to stand with your right foot in front of your left foot please.”

Officer: “O.K. But I’m still asking you that. I asked you if you had any medical conditions. You said no and now while we’re doing the test, you’re feeling unsteady.”

Cunningham: “You can [inaudible] unsteady at any time.”

Officer: “O.K. That’s why I’m asking you. She refused medical attention, didn’t she?”

Officer: “You can see now that you’re not?”

Cunningham: “I can see now that I’m not as steady as I should be.”

Officer: “O.K. So what’s going on. What are we feeling unsteady about?”

Cunningham: “Go ahead, let’s finish this up.”

The video skips forward and Cunningham is seen being handcuffed and led around the front of an ambulance.

This is not Cunningham’s first arrest for DWI. In 2005, she was charged in another DWI incident.

She is set appear in the matter in Bergen County Superior Court on Thursday.