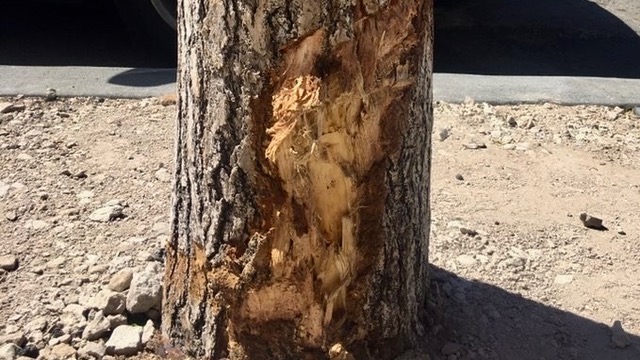 Local residents and activists are charging that the city botched the design and planting of 80 new trees installed as part of Central Avenue’s $4 million, mile-long refurbishment.

The renovation, which spans the stretch from Manhattan Avenue to Paterson Plank Road, was initiated by late Councilman Michael Yun and the SID in 2019 to fix the avenue’s crumbling pavement and sidewalks and replace its outdated lights.

What could have been a beautiful and verdant boulevard is now spotted with trees that are damaged and spindly, provide little shade, and lack sufficient diversity, the critics say. 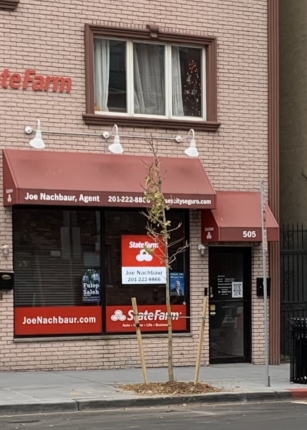 “With no vision to guide it, the project is a dismal and depressing indicator of the failure of Jersey City to do something as simple as beautify a few blocks,” said Heights residents and landscape architects Heather Sporn and Camille Cesari in a lengthy memo to Reni Stoll, a neighbor and member of the city’s Shade Tree Committee, in December.

Numerous problems involving the project’s design and execution were reported by other local residents over a period of months. Kevin Crystal counted 16 mature trees that had been burned or gashed, almost every tree in one particular section of the project. For her part, Stoll noticed numerous serious mistakes in the way the trees had been planted. Also, she said, the trees were not being maintained as the contractor was required to have done.

To Stoll, the end result would have been far more beautiful—and sustainable—had landscape architects been part of the planning process. Instead, that process was limited to Councilman Yun, the city’s Division of Engineering, Traffic, and Transportation, and the Central Avenue Special Improvement District, which represents many of the shops along the avenue.

“Professional landscape architects understand the design elements of successful streetscapes: materials selections, rhythm and balance (alternating trees for color and shape), scale and proportion, uniformity and connection throughout. None of these elements are part of Central Avenue,” Stoll said.

The project also laid bare the differing priorities of residents and businesses along Central Avenue. For the SID, maximizing the visibility of the stores’ signs and choosing the trees that were easiest to care for were paramount. For many residents, however, shade and beauty were the top priorities. 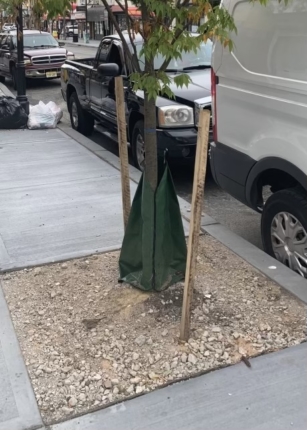 “The city should have included residents in the planning process,” Stoll maintains. After all, “It is the local Heights community that supports business on Central Avenue,” she said.

The entire construction bill would come to over $4 million with Jersey City responsible for $1.6 million and the state contributing the rest. The winning bid went to Cifelli & Son, a paving and masonry specialist from Nutley, NJ.

Soon after Cifelli started planting, Stoll noticed the company had violated many of the city’s Forestry Standards: The trees were placed off center and planted way too deep, and the soil lacked mulch and was full of crushed stones. All this hindered air, water, and essential nutrients from reaching the roots. 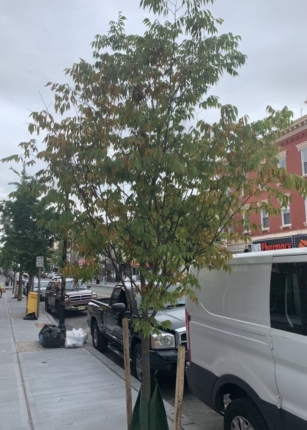 The standards also require that those city contractors hired to plant the trees also maintain them, i.e., to weed, prune, mulch, and water them, according to fixed schedules for two years. Stoll lives around the corner from Central Avenue and noticed sizable weeds in many of the tree pits containing the saplings. She also said the gator bags surrounding the trees never contained water.

Cifelli was not cited for any of these infractions.

While the trees that were planted during the spring were planted improperly, according to Stoll and others, they were healthy, vigorous trees. That was not the case for many of the trees planted this past fall. Eleven of the Gingkos installed were so weak and ill formed that they violated the Forestry Standards criteria for tree quality. Neighbors took notice.

“They look terrible in my opinion, each one has like 6 leafless branches lol they look sad,“ posted Rachel B.

Neighbor Sally M. agreed, calling the spindly specimens and all of Cifelli’s work on the trees unacceptable.

Technical violations were not the only problem. There were also matters of aesthetics, sustainability, and proper planting. Best practices in urban forestry call for planting multiple species in a given area. This recommendation is designed with aesthetics in mind and to protect the tree canopy as a whole since trees of different species are vulnerable to different diseases.

But the Forestry Standards do not set forth specific guidelines on diversity (such as for every city block there must be at least two alternating species of tree planted). They say simply that “the final selection of the species for each site is made by the Forester.”

Before the project got underway, Central Avenue’s most commercial stretch—from Manhattan Avenue to North Street—featured Gingko Biloba trees almost exclusively. Ed O’Malley, the city’s forester, and the Shade Tree Committee believed this constituted an unhealthful monoculture and wanted to diversify the stretch with Zelkova trees. The SID fought this idea, though it acquiesced and ultimately agreed to include 25 Zelkovas.

To the SID, this was more than fair. “[The] merchants’ main concern with Zelkovas is their big crowns blocking the visibility of their storefronts,” said the SID’s executive director, Alexa Lima, in an email in December.

And, they argued, Gingkos are hardy trees that require minimal maintenance. Because Zelkovas require more upkeep, including more than 25 would unduly burden the area’s businesses. Better to diversify the tree canopy north of the commercial stretch, she argued. Indeed, the city was planning to install numerous Yellowwoods and Lilacs between North Street and Paterson Plank Road. 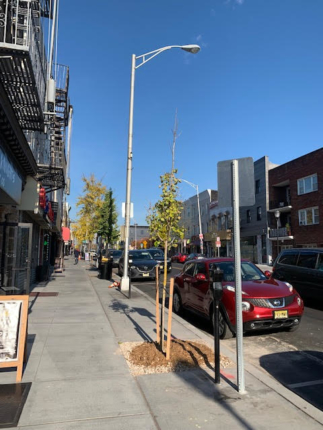 “Knowing there is no reliable tree maintenance plan in place for the city, the burden of caring for these trees will fall on the stakeholders along Central Avenue,” said Sanford Fishman, the group’s president, in a letter to the STC in October. Until the resources are available to provide Zelkovas the regular maintenance required, Sanford added, “It would be irresponsible to plant more than what is already in the plans.”

According to Stoll, Zelkovas do not require more upkeep than Gingkos.

Fishman also argued that planting Gingkos would not create a monoculture. “Planting more Gingko trees will help diversify the City’s overall tree canopy as Gingko’s account for only 2% of all trees in Jersey City,” he said.

Stoll disagreed and marshalled experts and community leaders to help make her case.

She asked an independent certified arborist (who asked that his name not be used) to stroll the avenue and evaluate the trees, which he did in October. Writing to Stoll afterward, he agreed additional Gingkos should not be added because even the mature specimens lining the thoroughfare were not doing well.

“The majority of the Gingko are in moderate to severe decline at a young age. Gingko biloba … are great in an urban environment when properly established, but given the characteristics of this planting site, I would not expect success,” he said.

“Planting only Gingko trees along a 1.5 mile stretch of road is not even close to diversifying the urban forest,” she told Stoll.

In time, the Riverview Neighborhood Association, the leading residential group in the Heights, got involved.

“We would like to strongly recommend no more Gingko trees be planted on Central Avenue,” wrote the RNA board. “We are concerned that while hardy, Gingko trees don’t provide enough shade to enhance the look of the Avenue. In addition, planting too many of the same type of tree could leave them open to disease or an infestation that might require the removal of many of them at one time, negating the positive effect the trees would create,” the board added.

Even Mayor Fulop got drawn in to the debate. He wondered, in an email to Engineering’s director, Paul Russo, whether the city “could pivot on the trees if we can find something better.” Russo acknowledged that there were sufficient funds to do this but recommended sticking with the current plan in order to avoid delay.

The SID and Shade Tree Committee were also in conflict over planting methods. The SID wanted the tree pits covered with plastic grates to maximize sidewalk space and protect the trees’ roots from trash and harm. This, however, would require an exemption from the Forestry Standards. For similar reasons, they also wanted the tree pits covered with porous pavement. This is something the Forestry Standards do permit. 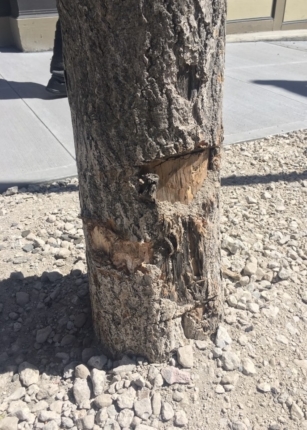 Tree with damaged trunk planted in soil with crushed stones

Again, the Shade Tree Committee and outside experts disagreed. Stoll said that, while the current iteration of the standards allows for porous pavement, arborists have since learned much more about the material and no longer recommend it. Indeed, the updated version of the standards, which the STC is currently drafting, will ban the material as infill in tree pits.

The independent arborist explained porous pavement “will girdle the tree … and immediately present a hurdle for the tree to overcome.” But he said the larger problem with porous pavements involves properly watering, fertilizing or caring for the trees’ roots without removing the pavement.

The parties reached a compromise: The tree pits would be filled with soil and mulch, not porous pavement, for six months as a test. But the battle lines had been drawn, and the crossfire reflected deep resentments.

Sanford pointed out that the design elements the STC opposed meet the criteria set by both the city’s forester and Forestry Standards.

“If the Shade Tree Committee feels the Forestry Standards needs to be updated, the Central Avenue SID would welcome the opportunity to provide a main street/commercial corridor perspective that is profoundly missing in the original document,“ he wrote to the committee in October.

There were some silver linings. Lima says she convinced Engineering to save 12 mature trees that had been slated for removal. The trees had not been in compliance with the Americans for Disabilities Act. And, she said, Central Avenue is now “modern and beautiful“ (though ironically, the photo the SID uses touting the virtues of the new trees depicts a Zelkova, not a Gingko.

But for many, the rancor over the project was not only unpleasant but unnecessary. They say it might have been avoided had landscaping and forestry professionals—along with residents—been part of the planning process. And arguably, the SID would have embraced the advantages of a fuller tree canopy had it had more confidence that the burden for maintaining lusher, faster-growing wouldn’t fall on them.

Like the battle over the 84 mature trees cut down in Society Hill in 2018, the city in this case delegated most of the landscaping decisions to small group of lay people with vested interests rather than to its forestry division.

In July, O’Malley told the Shade Tree Committee that he wished the city better enforced its tree ordinance.

Editor’s note: O’Malley tendered his resignation in October, the second forester to have resigned from Jersey City since 2017. In five of the tree pits where Zelkovas were supposed to have been planted, Gingkos were planted instead. It is unclear whether this mistake will be rectified.

Correction: An earlier version of this article contained two errors, i.e.,  that the updated Forestry Standards will ban porous pavement entirely and that Sanford Fishman was the former executive director of the Central Avenue SID. 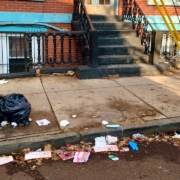 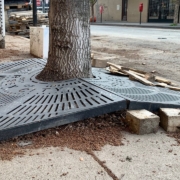 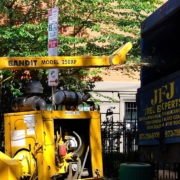