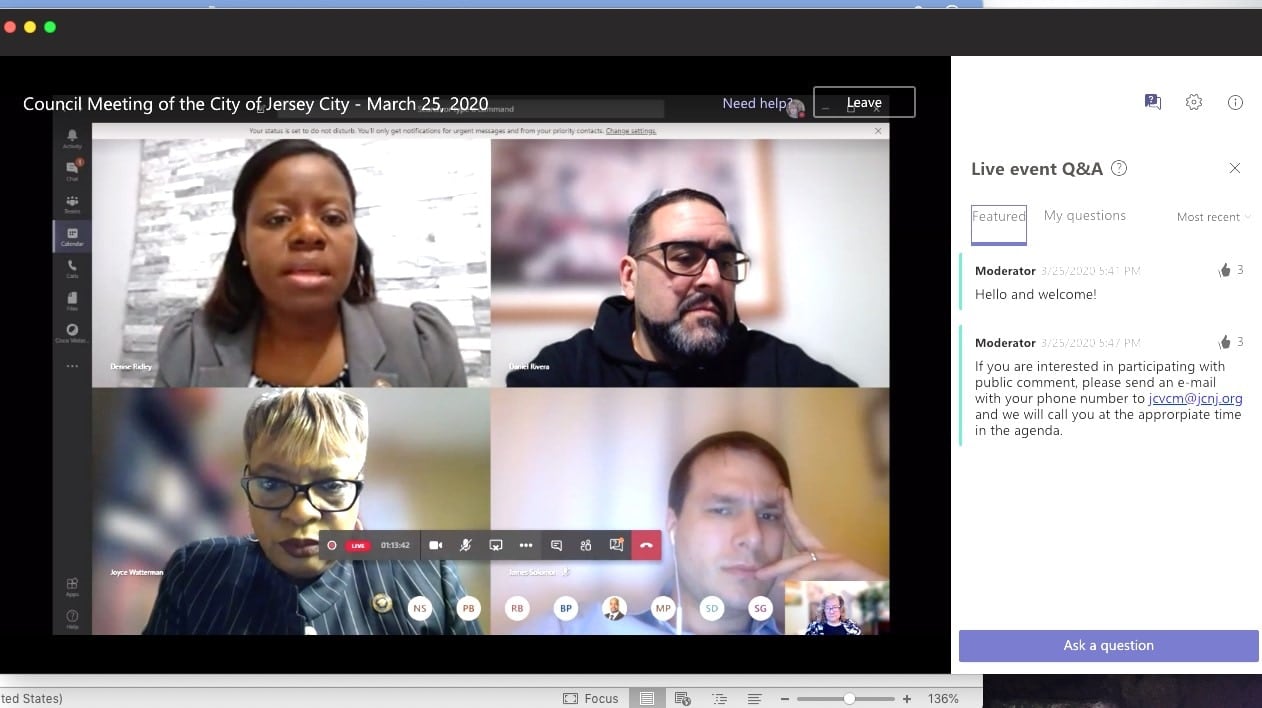 Wednesday’s Jersey City City Council Meeting sputtered onto the internet in a live broadcast in response to the coronavirus pandemic that has swept the globe and infected 222 Jersey City residents as of March 27. Council members, most of whom appeared to be participating from home offices, voted on resolutions and discussed two issues — Covid-19 and the case of the Jersey City Employment and Training Program whistleblower. 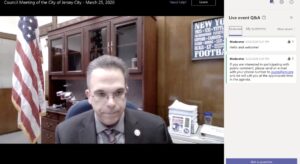 From his city hall office, City Clerk Sean J. Gallagher ran the meeting via software that gave Jersey City residents the opportunity to watch the proceedings from the comfort of their living rooms.  The typically four-hour meeting ran under an hour with only a few Jersey City residents calling in with public comments.

“This is a special meeting of the Jersey City Municipal Council in an effort to adhere to social distancing protocols and best practices imposed by the city and state authority,” Gallagher told viewers as he started the meeting. “Sorry for any technical difficulties.”

Like many Jersey City residents concerned about the COVID-19 pandemic, Misters Kyle Bruno and Ed Winger voiced their concerns during the public comments section of the meeting. Bruno asked the council if the city had contingency plans for people who can’t pay their rent; quarantining Jersey City from New York City (and vice versa); and what local hospitals would do if and when they reach capacity with quarantined patients.

“Is the council with the mayor’s office in any way thinking about any type of rent decrease?” Bruno asked. “Are they thinking of any quarantine or restriction of access into and out of New York City? When are local hospitals reaching capacity? Do we have any coordinated contingency plan, and how are we coordinating this plan with the state, FEMA, and the Army Corps of Engineers? I’m hoping you guys could shed some light on that.”

When resident Ed Winger called in, he talked of the uncertainty many local residents feel as they deal with unemployment.

“It’s challenging not knowing,” Winger said about what lies ahead. “Is the city going to do anything with the feds to support people who are on unemployment? There are a lot of services in Jersey City, our wonderful great city, but some of the city’s services to the people going through tough times are just not available.”

Councilman Boggiano said he had received calls that day about people fearing eviction.

“Sean, we’re going to have to protect people from being evicted if they can’t afford to pay their rent,” Councilman Boggiano said. “We’re going to have to do something. I’ve gotten a couple of calls on that. I’ve been speaking to people today on that issue. I hope we can come up with a solution on this.”

Gallagher told the council that, according to a recent New Jersey Supreme Court order, no evictions or foreclosures can proceed during the crisis.

Councilman at Large Daniel Rivera added that Governor Phil Murphy had just posted on the state’s website, NJ.gov, a link to services for those who lose their jobs and for employers who can’t keep employing their staff.

“We, as a city, we’re still under construction ourselves with what we’re going to do in terms with the funds that come in from the state,” Councilman Rivera said. “Actually, there are allocations where the business administrator has to be engaged along with all of us and the mayor himself.”

No Indemnification for the Jersey City Employment and Training Program

A resolution to authorize the city of Jersey City to enter into an agreement with the Jersey City Employment and Training Program came up for a vote — but not without objections from Councilman James Solomon.

Controversy has swirled around the program ever since July 2019 when employee and whistleblower Nuria Sierra’s accused the program’s then-executive director, Sudhan Thomas, of embezzlement. After filing her complaint, Sierra was fired from her job. In January 2020 Thomas, who was also head of the Jersey City Board of Education, was formally charged with bilking $45,000 from a government agency.

Councilman Solomon asked whether language could be inserted into the resolution that would protect the agency, which has no insurance, from going bankrupt if Sierra’s lawsuit goes forward. If a judge awards Sierra monetary damages, JCETP might not be able to withstand the fine and be forced to close its doors.

“As a policy question, my understanding is JCETP doesn’t have insurance for these types of claims,” Solomon said. “So, were a successful claim brought against JCETP, who would pay for it, and how would they continue their services?”

Corporate Counsel Peter Baker told Councilman Solomon that the city does not represent the JCETP and would not be indemnifying the agency.

“Why is it the law department recommendation does not indemnify JCEPT?” Councilman Solomon asked. “It’s my understanding we have done so in previous agreements similar to this one.”

Baker said he was not familiar with prior agreements. He added: “Simply put, in the present case, my responsibility and representation goes to the city and its constituent departments. If I felt it were in the city’s interest or it were necessary to indemnify another party, then we proceed with that and proceed with that thoughtfully. In the present case, and in view with the administration and business administrator, it’s our recommendation we not proceed to indemnify them for claims.”

Councilman Solomon pressed his point further, saying that the only lawsuit he’s aware of is by Sierra, and as a policy matter or statement of principal, she should be made whole.

“She clearly saw unacceptable behavior,” Councilman Solomon said. “She spoke out about it initially, quietly, not to the public and was fired, which was wrong. I think we have to take collectively, as a city, responsibility for that happening. My concern is if we proceed without indemnification, there’s no way for us to guarantee she’s made whole. If it doesn’t come out of the JCETP grant, where does it come from? JCETP doesn’t have a lot of resources. If we pass it, we end up doing wrong by her. And as a city there were clearly mistakes made, and we have to take responsibility for them.”

The Council voted 6-1 in favor of adopting the resolution with Councilman Solomon dissenting.