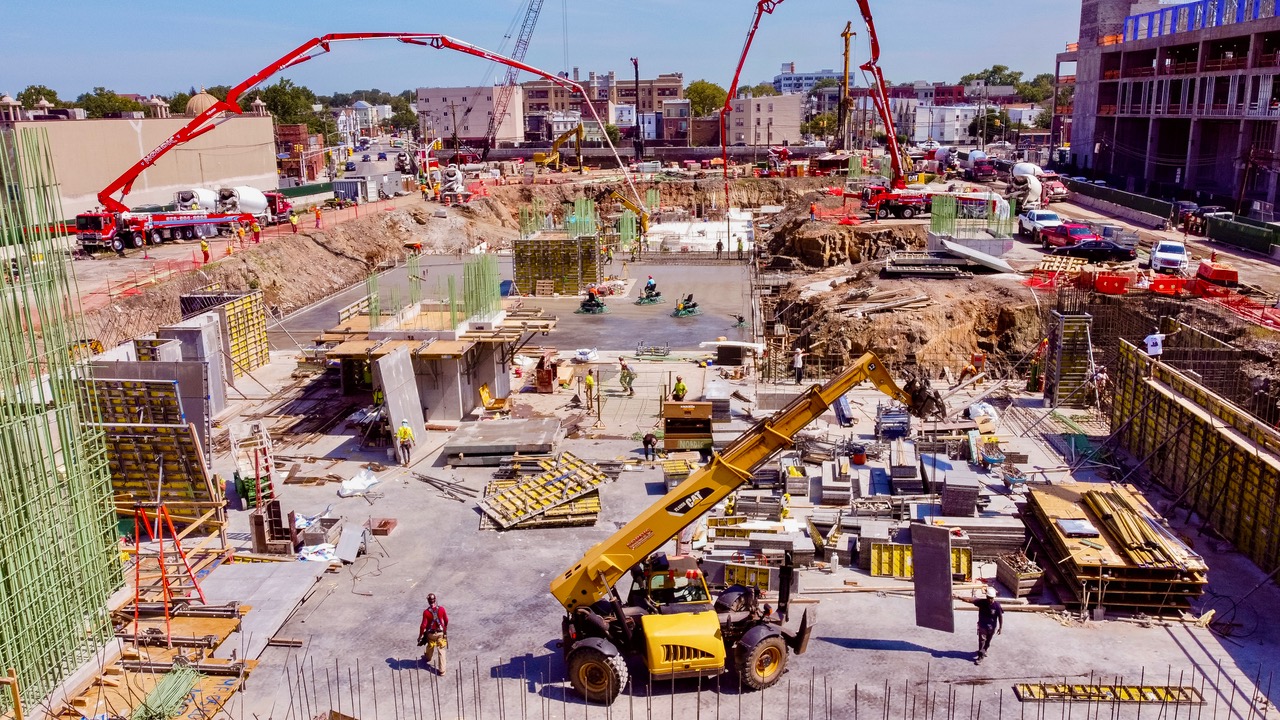 Even as some Journal Square residents voice heightened concerns about shrinking on-street parking, Hudson County is proceeding apace with construction of a brand new courthouse—to be known as the Frank J. Guarini Justice Complex in honor of the former congressman—off Newark Avenue.

At the same time, private developers are putting up residential high rises along the perimeters of the sprawling project that will only compound the exploding density of the area.

Once the county completes its work, Jersey City will be tasked with demolishing the county Administration Building at 595 Newark Ave. For years, that structure has been plagued by problems related to security, electrical wiring and asbestos. In its place the county is building a three-acre park, a first of its size for Journal Square, offering some green relief for an area dominated by concrete surfaces and vistas.

Deputy Hudson County Administrator David Drumeler was supposed to update residents about the courthouse project at a meeting last month at the old Brennan Courthouse, across the street from the construction site, but at the last minute, he couldn’t make it. The “town hall” meeting took place without him.

At the gathering, residents Laura Moss, Micheline Lewis and Russell Dover warned that the construction threatens to reduce the number of curbside parking spaces, amenities that many of the people who shop in the Five Corners neighborhood rely on.

And the loss of those spaces will hurt retailers doing business in that area as well, they cautioned. One longtime Newark Avenue butcher shop has been “closed until further notice,” reportedly due to issues related to deliveries and customer parking.

“I hope we’re not going to be overrun by sheriff’s officers and contractors parking on our streets,” Lewis said. “You can’t find a spot now.” Lewis also said that, with all the construction taking place, local street trees are not being maintained. 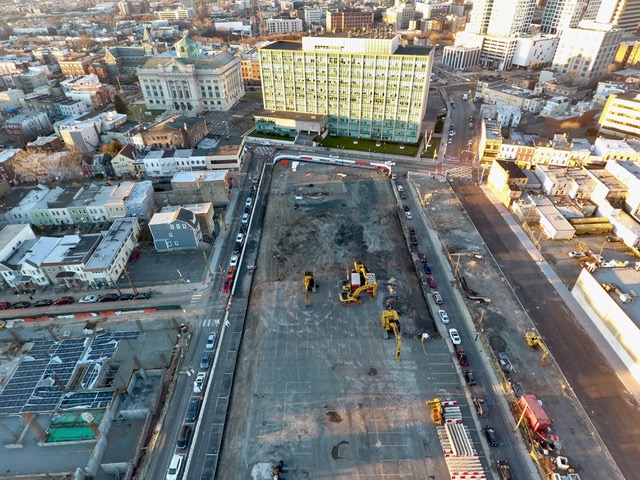 In response, Hudson County Commissioner Yraida Aponte-Lipski told the approximately 20 public attendees that a 459-space parking garage is being built bordering Rte. 139 at the northern boundary of the project. While the garage is intended for courthouse staff, judges, and jurors, the community at large may use it during non-business hours and on weekends, she said. Who will operate the garage and whether parking will be free have yet to be decided.

The courthouse and garage are expected to be completed by October 2024.

Even with the prospect of these new amenities, residents remain concerned about the quality of life in the neighborhood. Locals routinely have to dodge rushing traffic from buses, scooters and delivery vehicles, according to Dover. Once thousands of new residents move in to the high rises, current residents will be further “squeezed in,” Dover noted.

“We need a safer and greener Journal Square,” he said.

To that end, Moss, founder of the Courthouse Park Advocacy Group and president of the Hilltop [neighborhood] Association, called for the county commissioners to render binding the non-binding resolution they passed in February 2020 calling for Jersey City to replace the Administration Building with a park.

Also, Moss said, the agreement should call for public hearings on the plans for the new park. “The people need to have a say on the park’s design,” she said.

Responding to residents’ concerns, Ward D Councilman Yousef Saleh appealed for patience, noting the area has not had to accommodate infrastructure improvements for decades. “My research indicates that the last streetscape happened 30 years ago,” he reported.

Saleh said the city has begun green initiatives in the ward such as creating nature trails at the reservoir next to Pershing Field (budgeted to cost $6 million) and upgrading Leonard Gordon Park on Kennedy Boulevard (expected to cost $2 million).

As for the new courthouse park, Saleh assured residents that the design would be based on public feedback.

No timetable or projected cost has been disclosed for development of the new park.

Meanwhile, Terminal Construction Corp., of Wood-Ridge, is proceeding with the $342 million courthouse/garage project, which is being financed via bonds issued by the Hudson County Improvement Authority and guaranteed by Hudson County. Annual debt payments on the 30-year notes will vary from $16 million to $20 million. 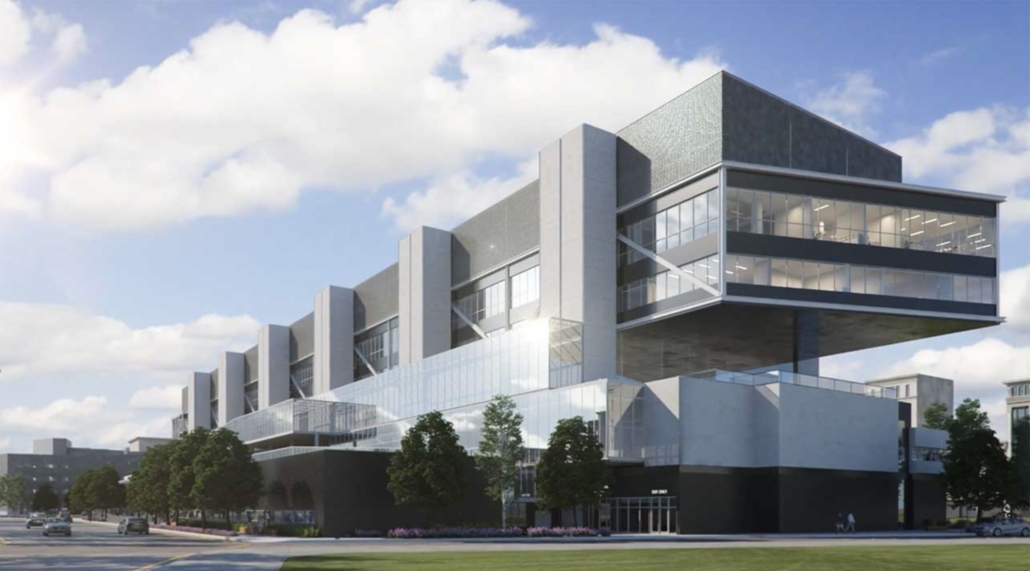 Both firms partnered in the construction of Hudson County Hi-Tech High School in Secaucus in 2018.

The new courthouse, bounded by Rt. 139 to the north, Newark Avenue to the south, Oakland Avenue to the east and Central Avenue to the west, will rise five levels and comprise 485,000 square feet of office space. The building will contain 24 courtrooms.

A county website describing the building’s floor plan created by Rafael Vinoly Architects, of New York, reflects public and private areas to better protect judges and jurors so that “courtrooms and the holding areas that support them will be sandwiched between the public and private zones. … By design, the public, judges and defendants will only meet within courtrooms themselves.”

Criminal defendants will be brought to courtroom holding areas via elevators designated for prisoner transport. Many offices will be outfitted with ballistic glass (where needed), and electronic scanners will be installed at key access points.

A total of 16 elevators will service the courthouse. There will also be publicly-accessible glass-enclosed ramps to access the first three floors.

The courthouse entrance will be along Central Avenue, which is being reconnected as a two-way block between Newark Avenue and Rt. 139. Oakland Avenue is being widened to improve traffic flow through the neighborhood.

Planning the project’s build-out was no small feat considering that its foundation rests atop Conrail’s still-active Long Dock Tunnel, carved out of the Palisades in Jersey City’s Bergen Hill section — 75 feet below the current Rt. 139 — and completed in 1861. Conrail uses a single track to transport freight through the tunnel between the Jersey City and Bayonne waterfronts and western New Jersey. That track crosses over the Bergen Arches tunnel and NJ Transit’s abandoned rail line.

To preserve the structural integrity of the tunnels, construction crews will sink 56 water-tight caissons filled with concrete on either side of the tunnels to offset the load from the garage infrastructure.

Meanwhile, workers are staging a series of concrete pours for the courthouse’s 54,000-square-foot, three-foot-thick basement floor and are erecting a series of towers to contain elevator shafts and/or stairwells.

More than 100 laborers are currently on the site and, at the job’s peak, some 300 are projected to be working.

Since the project began, at least one construction worker has been injured on the job. According to a September 2021 article by NJ.com, his injuries were not life threatening.

Goaded by Boggiano, Bing Throws Down The Gauntlet