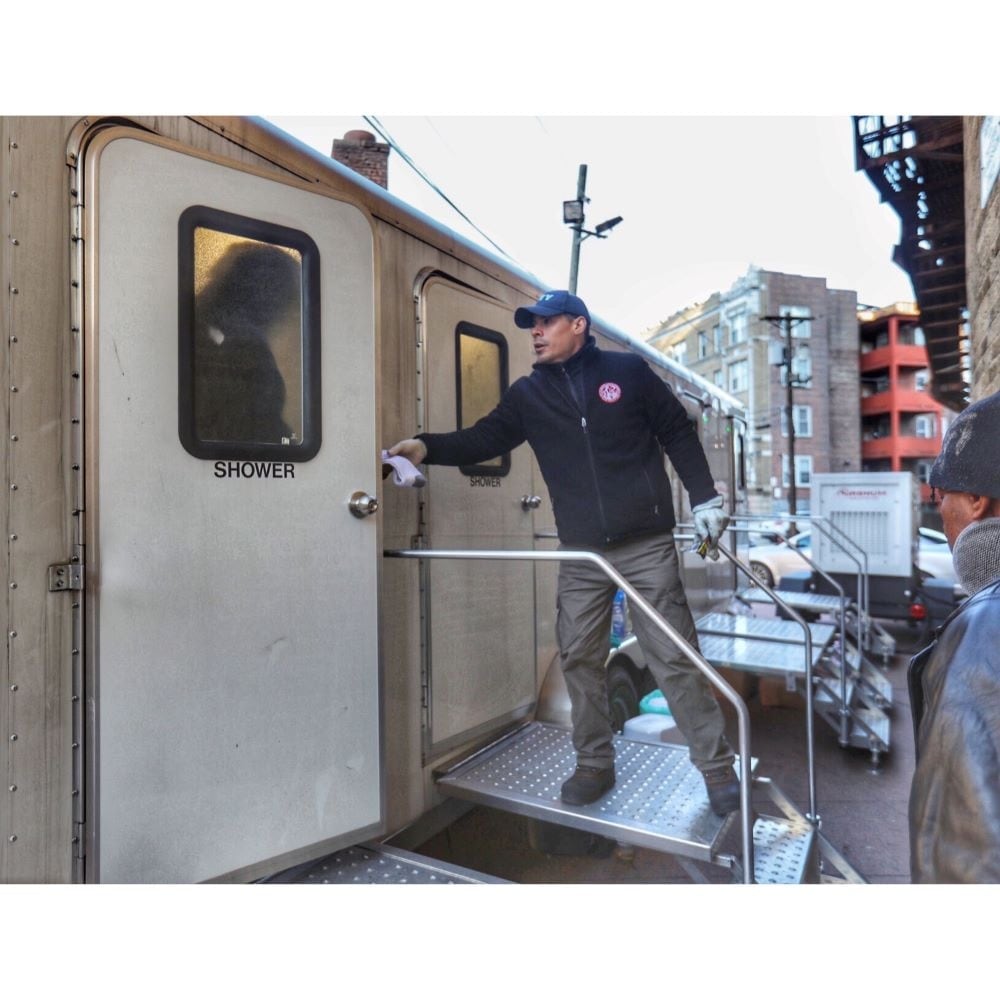 Three homeless persons queued up early Tuesday morning outside a mobile trailer in Journal Square for hot showers, meals and personal hygiene kits, all courtesy of the City of Jersey City.

Where needed, they’d also get counseling and shelter related to the coronavirus that has infected the city and the rest of the globe.

Jersey City Mayor Steve Fulop, accompanied by the city’s Public Safety Director James Shea and Health & Human Services Director Stacey Flanagan, welcomed the homeless contingent outside a mobile trailer the city – through its Office of Emergency Management – is using to provide these services.

Some 50 people in Jersey City’s general population, including one homeless person, have thus far tested positive for the virus, which the World Health Organization has labeled a pandemic. Close to 200 county-wide and more than 3,600 in New Jersey are infected, according to reports.

“We have witnessed how COVID-19 has had a devastating impact around the world on all of us,” Fulop said, referring to the WHO’s name for the disease caused by the SARS-CoV-2 virus. “But when you think of those who have the least in society, they are even more vulnerable during this crisis. We are all pulling together to normalize our lives in this unprecedented challenge of our times, but the only way we will succeed is if we look out for those who need help the most and leave no one behind.”

To that end, the city, which the state’s January 2019 “point in time” survey listed as having 420 homeless adults and children combined, is expanding its healthcare outreach to that population from three days per week to five, Monday to Friday, 7 to 11 a.m., with a second trailer on the drawing board.

Flanagan said the city opted to locate the trailer in Journal Square (just outside the entrance to a parking garage off Magnolia Avenue) after having identified 50 homeless people congregating in that neighborhood just a short walk to the PATH Transportation Center. 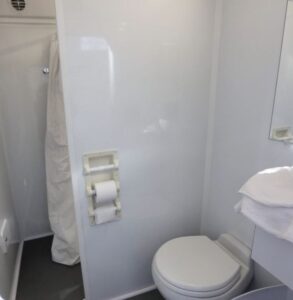 Inside the trailer, individuals can access five private shower stalls and sinks, along with what Flanagan described as “hospital-grade linens” provided by volunteer staff who, she said, would be using gloves and all required gowns and equipment to protect them from getting contaminated by the virus. Flanagan said staff members are trained to comply with federal occupational safety standards and that each shower is cleaned and disinfected after each use.

Shower users will also be offered packages of toilet paper, sanitary wipes, toothpaste, hand sanitizers and towels plus meals for anywhere from four to 14 days depending on whether they need to self-quarantine.

Hudson County also just announced a program to protect the county’s homeless population from COVID19 (albeit one aimed at older adults only). In this initiative, according to Frank Mazza, deputy director of the county’s Department of Family Services, motels along Tonnelle Avenue  will temporarily house chronically homeless persons age 60 as they have been deemed at high risk of infection given their age and living situations. The motels include Travel Lodge, Roadway Inn and Howard Johnson.

For some time, Hudson County has operated a large, dorm-like warming shelter in South Kearny every winter. The idea behind the motel program, Mazza explained, is to thin out the population at this warming shelter and at the same time protect older people and those with underlying health issues from getting sick and also from infecting others.

Mazza said the county will utilize both state block grant general assistance funds and federal block grant temporary assistance for needy families to pay motel room fees. “As it pertains to this crisis, we will provide housing until we are able to get the population safely through and then start again to work to find more prolonged housing solutions,” Mazza indicated.

Reportedly, up to 200 rooms will be available for this purpose. More information about the program is available at any of the county’s several homeless outreach centers or by calling the county’s social services unit at 201-420-3000.

Those who fear having the virus are urged to contact their health care providers or call the city hotline: 201-547-5208. 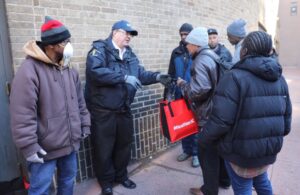