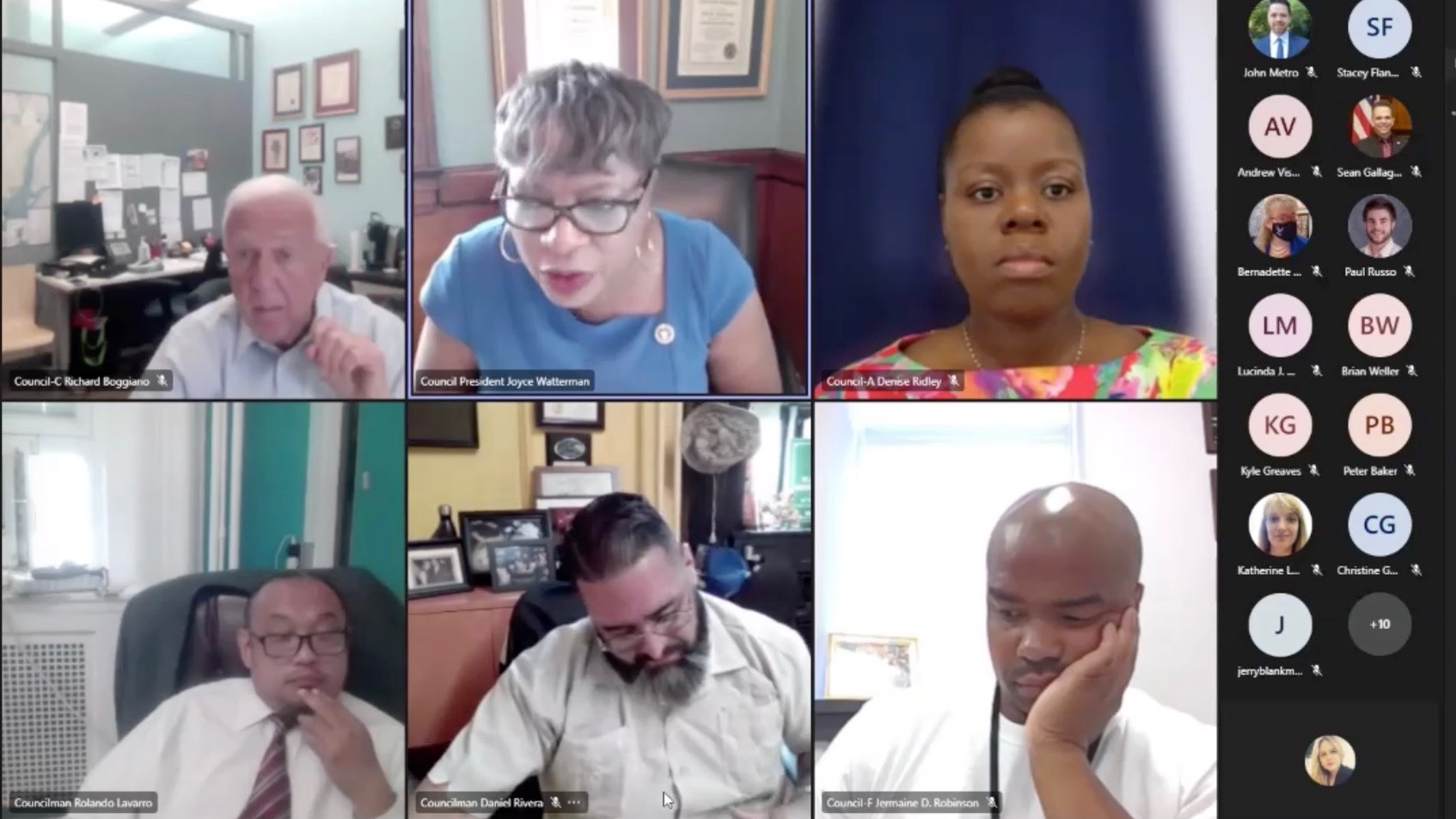 Councilman-at-large Rolando Lavarro introduced — but eventually withdrew — Ordinance 21-061 requiring the Exchange Place Alliance SID to obtain City Council approval for any contracts it wishes to enter into on city property. “Right now, there’s contracts that have been entered into for architecture, landscaping, for engineering, etc., … but they did not seek the city’s consent,” he said.

Lavarro withdrew the ordinance after Council President Joyce Watterman complained that it should not apply to one of the city’s numerous SIDS alone. “I think all the SIDs have to be involved with this. I don’t think this is a fair ordinance going to one … it must be all of them across the board, and we must have a conversation with them to let them know this is the next step in the SID laws we are going forward with,” she said.

Lavarro clarified that this issue has only come up with the Exchange Place Alliance SID and sought to compare that group’s activities with that of the Historic Downtown Special Improvement District. The city did not give the Downtown SID a blank check for the $6 million it would cost to improve Newark Avenue” he said. Rather, it was a process undertaken with the mayor and the local Ward E Councilman James Soloman to get public input. “It was all run by the city.”

Lavarro also noted that Watterman is a board member of the Exchange Place Alliance whose vote as such should “not be considered formal, official consent [by the city] in any way to authorize their various contracts.”

Although (with one exception), the city’s authority is already written into SID ordinances, Ordinance 21-061 would have made this authority more overt. In withdrawing the ordinance, Lavarro suggested the council send some sort of legal notice to the SIDs stipulating that contracts, even if already entered into, be formally vetted and approved by the City Council.

Lavarro asked the city’s Law Department to follow up with the SIDs “with speed” this week, noting “this is moving quickly.” He did not indicate which contracts he was particularly concerned about or that had triggered his drafting of the ordinance.

Ordinance 21-053 would require, among others things, cannabis retailers to post signs informing patrons about the prohibitions against smoking cannabis in public and consuming cannabis in a facility that lacks a consumption license. “It’s prohibited on city streets and sidewalks and parks. That signage would make it clear and make sure that people understand what the rules are as they are acquiring and purchasing,” stated Lavarro.

According to the ordinance, retail cannabis business applicants would also need to provide a list to the Municipal Cannabis Regulatory Board of any childcare facility or substance abuse treatment facility within a 200-foot “buffer zone” of the proposed business (though such proximity would not lead the board to reject an application outright).

To help local residents participate in the emerging cannabis industry in Jersey City, the amendment would halve the business license fees that cannabis retailers, as  “microbusinesses” recognized by the city, are required to pay Jersey City.

Ward F Councilman Jermaine Robinson raised concerns about the totality of the fees, stating they would likely “handcuff residents, especially on the South side.” He noted that those of his constituents who live in federally supported public housing are prohibited by federal law from smoking marijuana inside their homes.

“The more outdoor spaces we have the better,” he said, “because when you look at the federally funded housing [and people who live there], it’s going to be illegal for them to smoke inside the projects … so, to try and make this something that all people can use, we have to think about things like that.”

On Thursday, the council will vote on resolution 21-561 urging the Jersey City Municipal Utilities Authority to repeal the controversial solid waste charge known as the “water tax” that it had assessed  in January. The resolution also urges the MUA to refund the payments residents had made to the Authority.

Without comment, the council members accepted the resolution as a voting item for the Thursday meeting.

The Pershing Field pool’s motorized retractable roof has been in disrepair and is no longer closing properly. The council is set to vote on a resolution ratifying a $170,210 emergency contract with Structures Unlimited, Inc. to make the necessary repairs. The vendor would fix the mechanisms allowing the motorized retractable roof to function and would coat the exterior of the roof panels with a UV protectant. “This [UV protection] would add 10 to 15 years of life to the panels themselves, said Wendy J. McLauglin, director of the Department of Recreation.

“When we did the walk-through with Councilman Yun, this is one of the concerns that they had, that this [roof] was not retracting. It was almost a little bit scary. So, I’m glad this is on board to get fixed. This was one of Councilman Yun’s concerns, and I’m glad it’s getting done, hopefully,” said Councilman-at-large Daniel Rivera.

The City is introducing amendments to the 2021 FY Municipal Budget that include a new $41 million grant from the federal American Rescue Plan. The city will allocate the ARP funds to Covid-19 relief efforts.

After introduction at Wednesday’s meeting, a public hearing will be held on the budget with at least three days of notice to the public.

The next regular meeting of the Municipal Council is scheduled for Wednesday, August 18, 2021, at 6:00 p.m. Join the virtual meeting here. To learn more, go to JerseyCityNJ.gov.

As Many as Thirty Shots Fired in Powerhouse Arts District Shootout