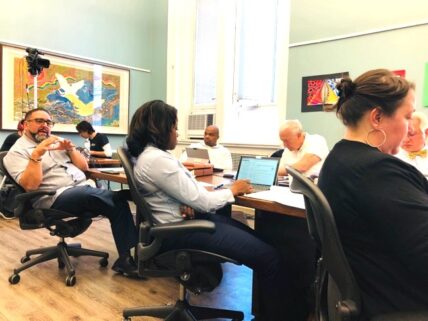 Senior yoga classes and Girl Scouts who sell their Thin Mints and Do-si-dos without permits at street-side tables are issues on the City Council’s agenda this week in Jersey City. At the caucus meeting Monday night, the chambers grew especially quiet when Director of Health and Human Services Stacey Flanagan addressed the council with a coronavirus update: So far, 76 people in Jersey City were tested, and none tested positive for the virus.

“We have zero cases of the virus here in Jersey City,” Flanagan began. “We have zero individuals under investigation. We have been tracking this since January 26.”

Covid-19 contingency was not on the agenda for this week’s council meeting, nevertheless, Councilman Rolando R. Lavarro, Jr. asked Flanagan if she could tell the council the city’s contingency plan to test, contain and treat people with symptoms of the coronavirus also known as Covid-19.

“This morning we had a briefing with not just the Jersey City Fire Department and Police Department, but county fire officials, and the Office of Emergency Management where we walked through some specific protocols that they will be following,” Flanagan said.

The Department of Health has set up an appointment-only protocol for senior affairs, immigrant affairs and veterans’ affairs’ clinical appointments, Flanagan said, and the department will follow up all phone calls. At the WIC clinic and the city clinic where immunizations and STD testing and treatment are performed, the same protocol is in place, she said.

“Every person that gets off a plane from any of the (affected) locations are given information to call their local health department,” Flanagan said. “We’ve tracked nearly 70 of those individuals and all are asymptomatic. Every other day (they’re) calling in and giving us their temperature. If they are not compliant after 24 hours, we follow up with them. If they are not compliant after another 24 hours, as of today, we are sending out individual home visits. We have two nurses on our team that we just hired through a public health detailing program that are able to support the epidemiologist and the health officer in that.”

Business Administrator Brian Platt addressed staff protocols for City Hall and said that right now the city is not taking any pre-emptive actions to send people home unless they have symptoms.

“If anyone who works or lives in the city has symptoms, we urge them to call a doctor in our city offices or their own doctor,” Platt said. “They are all prepared to go through a screening process. If it sounds like it might be the virus, there are steps that we are as a city taking. We’re urging people with symptoms not to just show up at an emergency room and possibly infect everyone who is in the emergency room. We will be releasing more information about what to do and what we’re doing on the city side.”

“We’re preparing for the worst case,” Platt added. “We have to decontaminate City Hall. We are doing extra cleaning and making hand sanitizer more available. We’re not quarantining anyone pre-emptively unless they have symptoms. We’re not getting ready to send everyone home.”

President Watterman requested more hand sanitizer in every office, especially since City Hall has only one bathroom for women and one for men that’s on the second floor.

“We’re adding (hand sanitizer) in certain locations,” Pratt said, “but there is a shortage.”

The Health and Human Services office which has lists of seniors who participate in its programming are calling those participants to tell them that if they feel sick, they should rest at home and not attend the program.

“We’ll happily follow up with them,” Flanagan said. “This whole week we’re hosting workshops and information centers at all the congregant meal sites. We’re having a deep clean at all our senior locations as well.”

Councilman at Large Daniel Rivera wanted to know if the Jersey City Medical Center cordoned off a staging area to triage people with coronavirus symptoms who came to the emergency room for treatment.

“They currently have a quarantine area,” Flanagan said. “They’re using standard isolation gear, and they are currently monitoring people that self-proclaim but have not met any of the standards that require us to do the test.”

“We’re waiting for the next protocol to come out, which we’re hoping the county has coordinated with the governor’s office to allow for additional testing sites at laboratories like they’re doing in New York,” Flanagan said. “We have not gotten that permission yet. We hope to get that permission. This is why we ask everyone not to run to the ER but to call the state number (1-800-222-1222). The state number sends (the call) directly to us, to our staff. We will do an overview. Then we will coordinate with them to get testing so that they don’t walk into a public waiting area.”

“We don’t want to go up against the mighty Girl Scout lobbyists,” Councilman James Solomon quipped.

During a discussion on the resolution appointing Joanne Rosa as new director of the Department of Human Resources, Councilman Lavarro said he had requested information from Rosa regarding the Recreation Department’s new reorganization plan (since it would have personnel implications) but had not received a reply or the documentation. According to Councilman Lavarro, when he asked Rosa why he had not received the requested documentation, Corporation Counsel Peter Baker told the council that there’s a legal issue at hand that prohibits delivering further documentation to the council at this time.

The council also discussed the resolution to continue senior yoga classes funded by the Office of Aging. The classes are offered in ten locations across the city and are attended by 200-350 seniors each month. Once under the jurisdiction of the recreation department, senior yoga and other senior exercise programs like salsa dancing, Zumba and Tai Chi are now under the jurisdiction of the Office of Senior Affairs.

Councilman Yun thought it might be better to offer the yoga classes through neighborhood yoga teachers rather than hire teachers who have to zigzag all over the city to the seniors’ class locations.  The national program Silver Sneakers which pays all gym and exercise programming locations directly for group classes that have seniors in attendance has also been approached as an alternative.

The council will vote on the resolution on Wednesday. 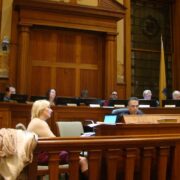 Strip Clubs and Funerals: Ian Steffe Records a Comedy Hour at Headroom
Scroll to top
Subscribe to Our Newsletter