At Wednesday’s meeting, the City Council approved a $292,000 settlement of a suit brought by a man who said he was run down by a police cruiser. The case, brought by Shiron Cooper against the city, the Jersey City Police Department, and two members of the department, arose out of an incident in Audubon Park on Aug. 6, 2017. Cooper alleged that he was hit by a vehicle driven by Sgt. John Ransom after the police claimed he had engaged in a drug deal.

In his opinion, issued April 22, 2021, U.S. District Court Judge Kevin McNulty, sitting in Newark, noted that the JCPD investigated “a total of seven excessive use of force” complaints against Ransom during a seven-year period, including one case of his having hit a suspect he was pursuing in his police vehicle.

“I find that Cooper has provided sufficient evidence from which a reasonable jury could conclude—although it would not have to—that the City was deliberately indifferent in investigating claims of excessive force. That a large number of complaints were filed and only one sustained merely sets the scene….  Such evidence is sufficient to raise a triable issue as to whether the City knew about and acquiesced in a custom tolerating the use of excessive force, and its use by Ransom in particular….”

Although Cooper’s lawyer argued that what happened to his client was a reflection of the JCPD’s failure to properly train its officers on the use of force, Judge McNulty concluded that, “What happened to Cooper appears on the record to be the result of one officer’s actions or negligence, rather than the obvious consequence of an unconstitutional departmental custom or policy.”

Ransom is no longer on the police force.

The council also heard from a group of downtown residents who appealed for relief from a small armada of food trucks camped along several blocks of Christopher Columbus Drive.

Ward E Councilman James Solomon met with a delegation of upset residents after the council’s Wednesday night session to hear their complaints and consider possible remedies. 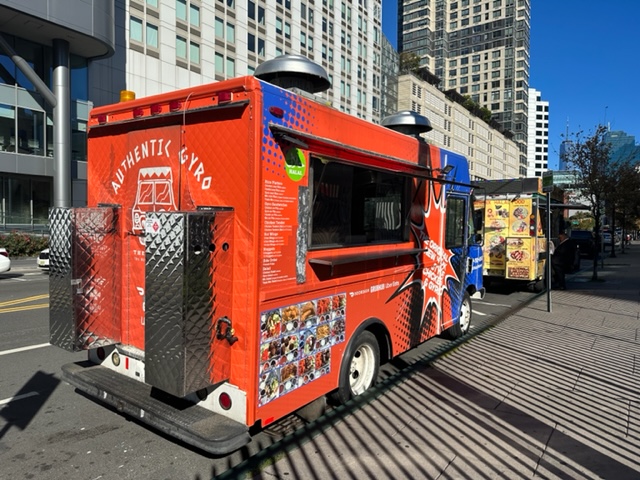 Two representatives from the neighborhood — Gary Murphy and Martha Martinez — delivered personal pleas during the public portion of the meeting.

Murphy said the presence of mobile vendors has grown in recent years has tripled from four to 12, and that the added trucks just compound the problems the mobile snack bars bring. In other areas of the city, food trucks typically shut down by 8 p.m. but along Columbus, he said, they stay open often to 11 p.m. and sometimes beyond.

And, he said, vendors are supposed to provide garbage bags and collect trash but don’t.

All of this, Murphy griped, “is a slap in the face to homeowners” in the area.

Martinez added that the accumulated litter and unwelcome loitering late at night only contributes to “decreasing the value of our homes.”

The residents’ complaints stem, ironically, from what Solomon described as the city’s effort to try and regulate where the food trucks could operate downtown.  In 2019 the council adopted an ordinance designating six locations along Columbus between Marin Boulevard and Warren Street – two on the north side and four on the south side of Columbus – for such enterprises.

In July 2022 the council amended the law, shifting the two north-side spots to the south side to accommodate a protected bike lane. The same legislation authorized four additional spots on that same stretch of Columbus for vendors who had spaces there the year prior but lost them earlier this year due to rule violations. That upped to 10 the total number of trucks that would be allowed there.

According to Solomon, several of the vendors who’d committed the violations (and have since been given their spots back) had been “longstanding businesses in our community” who had not fully understood the applicable ordinance at the time.

“We’ve made clear to them the rules moving forward and they will have to abide by them and (if they don’t, they) could lose the spaces in the future,” he said.

Meanwhile, the councilman said, he is committed to finding a compromise that will take into account the wishes of both sides.

“I am committed to making sure the existing trucks have a home there; however, I have also committed to work with them to find spaces in the area so the trucks are all not concentrated on their block,” the councilman said.

The complaints spring from buildings including 280 Marin Blvd., otherwise known as “Metropolis Towers.”

In other business, the council — at the instigation of local activist Katie Brennan and with the encouragement of Solomon — adopted a resolution calling on the U.S. Congress to pass the SPEAK OUT Act (H.R. 8227), which would prevent pre-dispute non-disclosure agreements from applying to victims of sexual assault.

Employers subject one in three employees to mandatory non-disclosure agreements, according to Brennan. “This protects perpetrators and companies and hurts everyone else,” she explained.

Said Solomon, “NDAs can too often be used to prevent people from speaking out about legitimate crimes under penalty of prosecution. This must change.”

The council congratulated longtime city employee Carmen E. Baez on her retirement after 41 years of municipal service.  An alumnus of Ferris High School (and of Kean University), Baez at one time worked for the city’s Supplemental Nutrition Program for Women, Infants and Children (WIC) and later for its Department of Personnel. Since 2004, she has worked in the City Clerk’s Office.

The council ratified Mayor Steven Fulop’s appointment of Nadine Killebrew as full-time judge of the Jersey City Municipal Court. Like her colleagues on the bench, Killebrew had been serving part time.  City Business Administrator John Metro said he expects the city’s courts operation to switch from virtual to in-person sessions by year’s end. Except for DWI trials, the court, like others around the state, has been working remotely during the pandemic.

The Museum of Jersey City History got a boost as the council authorized leasing the Apple Tree House on Van Wagenen Avenue to the organization for five years at $1 per year, pending the signing of a formal agreement between the parties. Martin Pierce, the museum’s board chairman, said the city has agreed to pay the cost of utilities for the two-story building.  He said the board is gearing up for its first planned exhibit: “(former mayor Frank) Hague’s Jersey City: Yesterday and Today,” slated to go up in January or February 2023.

A Garden, Ice Hockey and Teacher Retention Dominate Board of Ed Meeting
Scroll to top