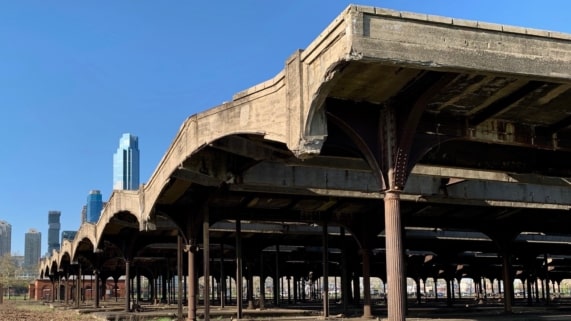 With its spectacular views of the Statue of Liberty and Ellis Island, Liberty State Park (LSP) easily ranks as the crown jewel of New Jersey’s state park system but some people are asking why it can’t offer more in the way of amenities. Questions surrounding food concessions, transportation options and a renovation of the crumbling train shed have been overshadowed by the debates over Caven Point and the restoration of the park interior.

The park’s northern end features the historic Central Railroad Terminal of New Jersey, where millions of immigrants entering the country from around the Civil War to 1967 boarded trains and ferries taking them to homes and jobs in a new land.

As many as 5 million visitors from near and far are drawn annually to LSP’s 1,200-acre expanse where walkers, runners, and cyclists traversing the Hudson River Waterfront Walkway can gaze out at the New York skyline and the Hudson River. A host of migratory birds also flock to the site.

At the park’s northwestern entrance sits the Liberty Science Center, the state’s first major science museum. Inside the park are the Liberation, a bronze sculpture memorializing the Holocaust; The Sail of Columbus, a two-story bronze monument commemorating the 500th anniversary of Columbus’ voyage, and Empty Sky, the state memorial to the September 11, 2001, terrorist attacks.

There’s also a nature interpretive center, which sponsors periodic tours and lectures, a public boat launch, a kiddie playground and interior park trails. Closed for years due to damage sustained during Superstorm Sandy, the center will reopen with the lifting of  COVID restrictions by Governor Murphy. And it will feature all new exhibits (and bathrooms that will remain open  even when the building is closed.)

Liberty State Park is flanked with a few other privately owned enterprises. On its southern end is the 18-hole Liberty National Golf Club across from which is the RPM Raceway for indoor go-karts; a private marina occupies part of the park’s northern tip under a lease arrangement with the state.

So why with all these attractions and loads of visitors does LSP offer not a single food concession? Why does the rail yard of an historic transportation landmark remain fenced off to visitors due to unsafe conditions? Why are only a handful of the scores of walkway pole lights working and increasing numbers of benches showing their age? And when will operation of the commercial ferry service from the park to Liberty and Ellis Islands resume?

Caryn Shinske, spokesperson for the state Department of Environmental Protection (DEP), which manages the state parks, said the ferry service was temporarily disrupted when the barge that was used as the embarkation and disembarkation facility partially sank on Christmas Day 2020.

“The ferry service will resume Memorial Day weekend utilizing the existing north ferry slip directly in front of the (Central Railroad of New Jersey) terminal building,” Shinske added. There are plans to remove the existing barge and replace it, which could take 18 to 24 months, but no start date for the work has yet been set, she said.

Then there is the matter of the rail facility. The opening of the federal immigration station on Ellis Island in 1892 opened the floodgates to millions of new U.S. residents who streamed through the CRNJ terminal.

At its peak, an estimated 75,000 travelers flowed daily through the terminal on 150 New York-bound ferry runs and 300 trains.

To better accommodate the commuter demand, in 1914 the CRNJ completed a 300,000 square foot train shed—covering the length of six football fields—affording cover for riders accessing 12 platforms and 20 trains operated by the Central Railroad of New Jersey, Baltimore & Ohio, and Reading and Lehigh Valley lines. The aging structure still stands today along with a modernized terminal at the foot of Communipaw Avenue.

Stretching back to the 1600s the location has served as an embarkation point for New York-bound ferries, even for steamboats plying their way through the vast harbor.

Liberty Historic Railway and other advocates for the shed’s preservation say the restored facility could host such activities as interpretive exhibits, a display of historic locomotives and rail equipment, crafts and food fairs, and an end point for a park trolley shuttle.

Curtis + Ginsberg Architects and Donald Freeman of Old Structures Engineering, both of New York, were retained by Liberty Historic Railway in 2012 to review the structural integrity and future use of the shed. 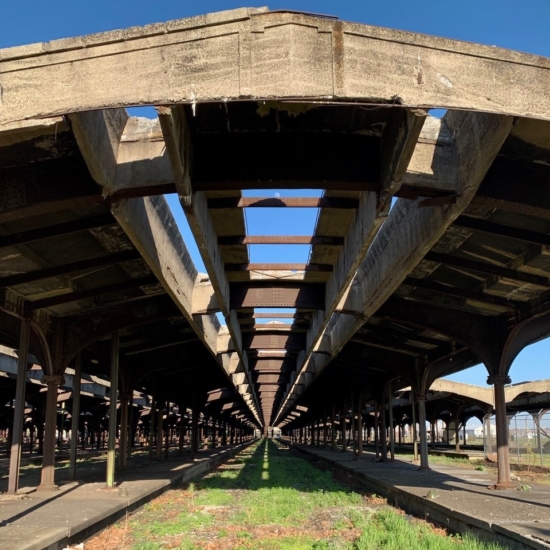 The structure features 10 concrete platforms and 30 cast-iron column bays supporting a steel frame and concrete roof. While the consultants saw huge potential, they concluded  that such factors as “falling decorative elements, connector plates, and pieces of concrete make the structure generally unsafe for people to be present in the train shed for any purpose, including maintenance.” In engineering jargon, the shed is a “stabilized ruin.” Shoring up the structure, removing the roof, remediating asbestos in the roofing membrane system, removing concrete and repairing steel would cost $23 million, they estimated. Demolishing and rebuilding the structure would take about $14 million (all figures as of 2012).

Asked about the prospects of fixing up the shed as a future tourist attraction, the DEP’s Shinske said the department has “no current plans” for the train shed. “The current management practice is to maintain [the shed] as a ruin.”

Whether that position will translate to DEP budgeting or to seeking outside funds remains to be seen.

Perhaps the most newsworthy development Shinske had to report concerned food vending. The park has not featured a food concession since just prior to Superstorm Sandy in October 2012 when it sustained significant damage. All that will change this summer: The DEP is currently soliciting bids for mobile food vending.

Vendors will be expected to dispense food such as hot dogs and hamburgers, chicken nuggets, salads, and wraps, non-alcoholic beverages, ice cream and other desserts, and novelties from a fully equipped, self-contained mobile retail food unit or truck at seven individually licensed locations within the park (outside the park office at the southern end of the park, the Freedom Way Playground in park’s center, and outside the CRNJ terminal at the northern end of the park).

Sam Pesin, president of the nonprofit volunteer Friends of Liberty State Park, an open space advocacy group with about 800 members, said he was “glad the DEP has worked on this change after about three summers with about one ice cream truck in LSP.”

According to Pesin, the DEP had exploratory talks with a prospective café concessionaire last year. But Pesin said those talks ended after the prospective vendor’s representatives asked the DEP if the company could run 30 catered events outside the terminal under a tent during summer weekends. Potential conflicts over the use of the space for parking by other weekend park guests may have helped sink the vendor’s pitch, Pesin said.

If the rail shed is ever renovated and becomes a viable attraction, the DEP may consider providing a public transit link for visitors, connecting the Hudson/Bergen Light Rail station between Communipaw and Johnston avenues, just outside LSP, to the CRNJ terminal.

For about a decade, NJ Transit ran a bus shuttle between the Light Rail station and the park but dropped it in 2010 as a casualty of budget cuts. The Hudson Transportation Management Association (TMA), a unit of the county Improvement Authority, filled the gap in 2011 with a summer shuttle, but that failed for lack of funding. A private operator picked up the slack the following summer but couldn’t continue.

McKelvey of Liberty Historic Railway is pitching an historic rail trolley hookup. But here again, money is an issue.

Another idea, Schwartz volleyed would be a park “circulator,” a vehicle that would transport people in a loop inside the park. That option could be possibly be realized with federal or private funding.

Jersey City has yet to go this route. Nevertheless, the city is partly funding the new vehicular bridge from Jersey Street to Audrey Zapp Drive (at the park’s northern end) that is currently under construction.

Then there is the matter of maintaining standard park equipment like the benches and lamposts. Said Shinske: “Light poles and benches are maintained year-round. Now that winter storms are behind us and as we onboard more seasonal maintenance employees for the warmer months, we can focus on repairs.”

How much the DEP figures to spend on those fix-ups is unknown. LSP derives revenues from three basic sources: lease fees from the Liberty Landing Marina and Hornblower Cruises, special events such as film and TV productions and polo exhibition; and a share of the state corporate business tax.

While LSP has, so far, successfully fought off threatened intrusions by developers looking to expand a golf course and a marina or to build a giant casino/hotel within the park borders, Central Park has been impacted – literally – by the long shadow of development: residential skyscrapers have cast a gloomy parlor over the southern edge of the park, causing documented temperature drops that discourage kids from playing and folks from walking along paths in the beloved park. 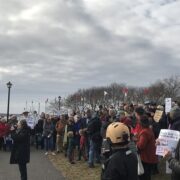 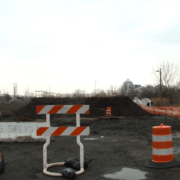 Local Progressives Keep up the Fight