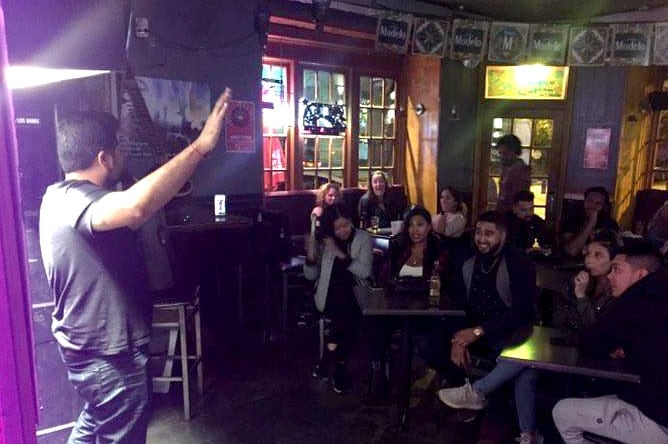 Until recently, this sad town of Jersey City was a comedy desert, or perhaps more aptly, a comedy death trap. One was hard pressed to find a comedy show in town. There was no brand-name comedy club (although Rascal’s on the Hudson endured a brief, tortured stint downtown in the mid aughts). The Jersey City Comedy Festival* lasted just two years — 2013 and 2014 — produced by Art House but was for the most part spread out in a vast web of stageless bar and gallery shows throughout town. My own show, “BabyHole,” lasted three years from 2007 to 2010 but never had the same venue for long due to shifting entertainment ordinances. Part real show, part dive bar rock show, part open mic, sometimes an illegal warehouse show, it died mainly because no one appreciates anything until it’s gone.

Happily, things have been brightening a bit this past year.

“Show Us Your Bits” comedy productions by Angela Sharp ran for 14 months at McGinley Square Pub starting in July 2018, during which time it became a veritable institution. The bi-weekly Saturday afternoon mics drew comedians from all over New Jersey as did late night Monday mics and pop-ups throughout the week. It abruptly ended in September, some would say prematurely.

And Rich Kiamco’s “The Laugh Tour,” which has semi-consistently been running with Art House Productions at various locations since 2010, sprouted the Sixth Borough Comedy Festival in 2018.

As Jersey City is steadily overcoming the stigma of being a venue-barren town, comedy is re-emerging. Now you can’t even throw a rock without hitting a decent show or someone who calls oneself a comedian; you can see comedy almost every night of the week (at times you can even see six shows in one night, most of them free); you can attempt to be a comedian at one of the many free mics around town; and sometimes you can go out to dinner and not even realize you’re at a comedy show.

Below is a list of regularly scheduled comedy shows. Always call the venue to confirm beforehand (for instance, three shows that had been on this list were cancelled just prior to publication). Appreciate these shows while you can, and support these poor, talented, hardworking people.

“Are You Entertained Wild Out Wednesday Comedy Show” – This monthly show combines comedy with other forms of art, such as music, poetry, and (occasionally) magic, to give you the sense of a mini concert. Hosted by Sharief Johnson.
$10
Bright Side Tavern (141 Bright Street)
Last Wednesday of the month, 8 p.m.

“CrockPot” – They’re all good at this free and absurd stand-up show with a seemingly endless lineup every month. The show is in the basement of a vegetarian restaurant and bar called Pet Shop (that used to be a pet shop). It’s reminiscent of Uncle Joe’s circa 2004. Hosted by Alex Grubard, Nate Marshall, Lemaire Lee, and Tyler Rothrock.
Free!
Pet Shop (193 Newark Avenue)
The second Wednesday of every month, 8 p.m.
https://www.facebook.com/crockpotcomedy 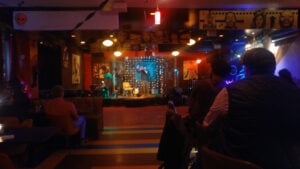 Prathaviraj Purohit does stand up on FM’s stage during the Friggin’ Fabulous Open Mic.  Photo by Melissa Surach.

“Riff Off the Cliff” – The most underground of all, this stand-up show is in an art gallery above a garage known as The Hive, which is filled with local art, antiques, and vintage clothes. It’s in Bergen Hill in the shadow of The Beacon. Hosted by Ryan Rummel, Scott Holt, and Nick Fierro. Music by DJ Blvck Truffle.
$15, BYO
Deep Space Gallery (77 Cornelison Avenue)
Usually the second Saturday of the month, 8:30 p.m.
One-year anniversary show on 11/9!
@rifffoffthecliff

“The Zack and Pat Show” – Don’t miss this stand-up show in a beloved art gallery bar, not just for the comedy bargain of a free show and the intriguing artwork but also to appreciate this Newark Avenue pioneering restaurant/gallery while it lasts. No one knows how much longer it will exist. Hosted by Zack Breheney and Pat Wadleigh.
Free!
LITM (140 Newark Avenue)
Monthly, usually second or third Sundays, 7 p.m.
https://www.facebook.com/ZackAndPatShow

Some Open Mics that are Good for Comedy 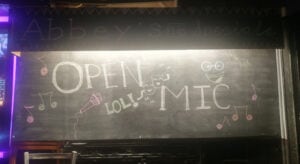 If you’d like to try stand-up yourself or just watch the struggle, there are plentiful regular open mics to hit. Here’s a list for starters:

Take a Compliment – An interdisciplinary mic with a full music stage including a grand piano. Hosted by Adrian Dannon, Ian Steffé, and Diana Zinni.
Head Room Bar and Social (150 Bay Street)
Wednesdays, sign up at 6:30.

Education: “We Want to Go Home!”
Scroll to top