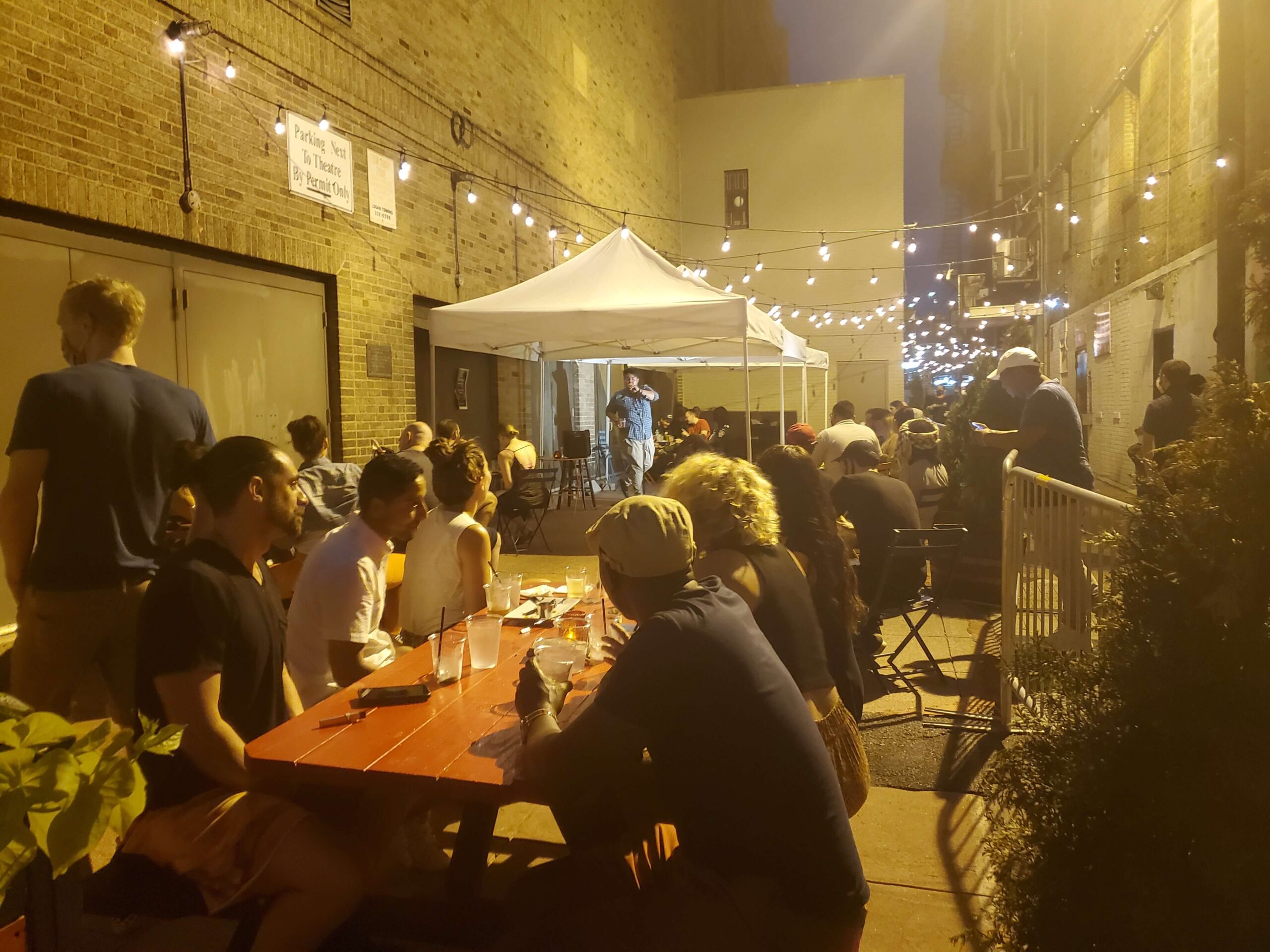 We almost gave up hope for live comedy. For example, Jersey City Comedy Festival, the most prestigious comedy event in town all year, is going to be virtually broadcast via Zoom this August. It kind of sucks all the air out of the glamour. In the words of one of the participants (who wishes to remain anonymous), “It’s not like anything matters anyway.” However, with cautious baby steps, the few outdoor comedy shows that began in July, along with secret comedy open mics, are bringing hope and inspiration.

Last Friday I went to one of the first comedy shows in Jersey City in an alley by Journal Square. It was “The Extra! Extra!” show at Journal Square Lounge’s outdoor seating space. This alley wasn’t just for peeing in anymore.

Before Covid, Irv Hernandez hosted and produce this weekly show in the basement of the lounge. I mentioned to him that I liked the ambiance of the open-air space, with tents and stringed lights, better than the basement show. Hernandez lamented, “But the laughs sounded better in the basement,” referring to the booming echoes of laughter and applause that were signatures of the pre-Covid shows. 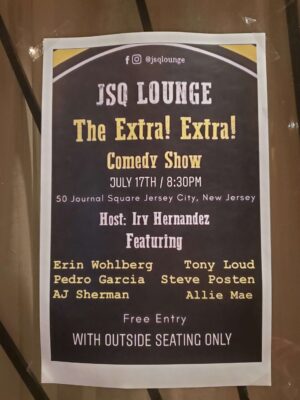 Generally, everyone kept their social distance. The police showed up briefly to check on things. The sound went out a few times. Some comedians, like Tony Loud, performed in a mask. Some wore gloves. Many joked about getting sick from the microphone. Almost all mentioned that they were rusty as hell, despite getting consistent laughs and even the occasional encore. The lineup consisted of mostly standup. A highlight was musical comedian AJ Sherman teaming up with Steve Posten doing pun-driven alternative comedy.

I spoke with Frank Cupo, the owner of the lounge after the show. Born and raised in Greenville, he showed me some of his childhood photographs displayed on the walls of the lounge. “It’s the first night—the first busy night. I hope it continues!” He said, both humbled and beaming with gratitude. By Monday, he’d asked Irv Hernandez to resume the weekly Friday night shows that were so popular before. The next show is this Friday, 8:30 pm, free.

The week before, on July 11th, Alex Grubard and Ryan Rummel premiered the first outdoor performance of the Corgi Comedy Club. The club had been a monthly Saturday night staple at Jersey City’s distillery. This week’s show was held in a large patio (larger than an alley at least), with a roofed stage. They are currently taking it one show at a time, aiming for every other Saturday while the weather is warm.

For precautionary measures, tickets are limited to 50 people even though the patio could fit many more. All tickets are sold in advance, and parties are placed at least six feet apart. There is table service so people don’t move around. No one is allowed inside except to use the bathroom. And there’s free hand sanitizer everywhere because Corgi makes its own.

“I’d like to throw more shows in JC, but I’m not sure where are the most reasonable other places. I’m looking into it though, brainstorming,” Grubard said. “Rooftops, backyards, parking lots, people around the country are already thinking up all kinds of ways to perform for a live audience. Outdoor performing is very different. The intimacy of stand-up is kind of gone. It’s more like a really great vibe, like a beach bar in Cancun I imagine.”

While it might take great effort for some to imagine Jersey City as a beach bar in Cancun, you can experience it yourself at the next Corgi Comedy Club on Saturday, July 25 at 7 p.m. Tickets are available online via eventbrite for $20.

Another exciting aspect of the new normal for performers are semi-secret, invite-only mics. Mark Henely, who used to host Open Mic Awesome at SubCulture, has moved on to organizing mics at secret locations.

“As soon as I read that Governor Phil Murphy said that it was legal for 25 people to gather outside in New Jersey, I knew it was only a matter of time before I figured out a way to have an open mic again,” Henely said. 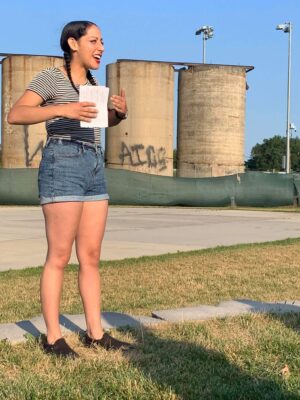 After talking with friends and comics to test the idea, to see if people would be interested in an outdoor mic at all or would be tentative due to safety and social distancing, Irv Hernandez suggested a park in a secret location, thus the concept: Open Field, Open Mic (although there would be no mic).

Henley developed a set of rules that made sense to him. “There would be no microphone and no physical contact between comics. I also told everyone to expect to wear masks the whole time,” he said.

The free mic is capped at 15 comics. He promotes it through a private Facebook event so the word doesn’t get out too much and the audience remains below 25 people.

So far, Henely’s hosted these mics roughly once a week on whichever day of the week is the least hot (his words). He said that in general, they’ve been incredibly fun, and people have been very supportive of one other.

“The one challenge is that sometimes other events in the park can derail the event. One time, before we could get started, an aerobics class showed up and started working out in the exact place we decided to do our mic. We ended up having to move locations, and performers had to perform with the class jumping up and down in the background.”

Henley doesn’t expect this to go on forever. Open Field, Open Mic isn’t meant to be an institution. And it’s not meant to be a regular thing. It’s meant to be a stop-gap between the quarantine and things opening up again,” he said. “We might take a few weeks off from doing another one and then maybe make it a once-every-few-weeks event.”

As the Black Death plague preceded the Renaissance, perhaps we’ll look back on this period of Covid comedy as the beginning of a new golden age of comedy,The Covid Age. As Grubard says, “It’s still fun, and people laughed and enjoyed themselves. I think like many eras of standup, this is just another thing that will be around. It has validity and appeal, so outdoor shows will likely be prevalent for a few years. Same with Zoom shows. There are positives to these kinds of shows other than being an alternative to indoor entertainment so not everyone will pack it in once we can all squish like sardines inside again.”

Jersey City Teen Gets Down and Dirty