Spring-like breezes lofted through the open windows of the Efrain Rosario Memorial Caucus Room Monday night as Jersey City’s city council gathered for its Feb. 23 caucus meeting. The council discussed several ordinances pertaining to Jersey City’s parks and recreation including an ordinance to “vacate” 17th Street for the new Coles Street Park, a grant of $750,000 from the NJ Historic Trust, and details on a shared agreement with Hudson County and other municipalities to track housing foreclosures. 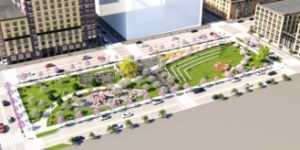 First on the agenda, Ordinance 20-026 to “vacate certain portions of 17th Street” for the Jersey Avenue Redevelopment Plan’s Coles Street Park. Eliminating 17th Street will create a single lot to be transformed into a campus of mixed-use buildings with a pedestrian plaza and walkway.

Ward C Councilman Richard Boggiano took issue with the ordinance, stating that Jersey City already has enough parks. Although Coles Street Park will be paid for by Hoboken Brownstone Company (the developer), it will need to be maintained by Jersey City.

“That’s a big park,” Councilman Boggiano said at the top of the meeting. “We just spent $40 million on Garfield Avenue. How much is this going to cost us? Look at Pershing Field and all the things that should be done with the existing parks. I can’t see building new parks until the city takes care of the parks we already have.”

In November, Mayor Steven Fulop broke ground for Coles Street Park between 16th and 17th Streets. Urban Architecture LLC of Jersey City designed the park to include two dog runs, a playground and a stage for live performances. The park is the first phase of the Emerson Lofts development, a mixed-use property that is part of the Jersey City Redevelopment Plan. 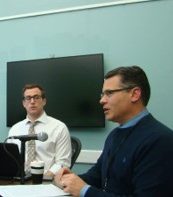 The council discussed Resolution 20-173 authorizing the acceptance of a $750,000 grant from the New Jersey Historic Trust Fund for the restoration of Reservoir No. 3, a decommissioned reserve on Bergen Hill in the Heights.

Built between 1871 and 1874, Reservoir No. 3 was part of the city’s waterworks system designed to provide potable water to Jersey City and Ellis Island. Since it was drained, an ecosystem has evolved in its place with trees, wildflowers, swans, great blue heron, peregrine falcons and a six-acre lake.

The NJ Historic Trust Fund granted Jersey City the money to restore Reservoir No. 3’s screen house. Once the council approves the award, the city will be expected to provide $750,000 in matching funds, and once restored the screen house will be an “educational and preserved historic resource” according to the state.

“Give me the capital account balance, the spend down on capital accounts to date and what it was originally budgeted for when the council authorized it,” Councilman at Large Rolando R. Lavarro, Jr. said. “I want to make sure we spend what we budgeted for.”

“We want to make sure at the end of day what is spent and what’s left,” Councilman Yun added.

Once the project is completed, the state will have final approval of the renovation, Weller said.

Ordinance 20-028 to increase the fee for registration of foreclosure property and Resolution 20-182 authorizing a shared services agreement with Hudson County for Jersey City to participate in a county-wide registration program for foreclosed properties were brought to the council’s attention by Dinah Hendon, director of the Division of Housing Preservation.

Hendon’s office uses a foreclosed property registry, but it doesn’t seem to cast a wide-enough net. She supports the resolution to enter into an agreement with Community Champions Corporation (an organization that provides project management support for municipalities) because it will bring more foreclosure properties to the city’s attention. In doing so, tenants will have their rights addressed and homeowners can participate in needed housing counseling, she said.

“This company has the programs and access to the state court records, (and) it’s going to uncover many more foreclosures and contact those banks and handle the whole registration process that we are now trying to do in house,” Hendon said.

In 2019, Hendon’s office registered 544 foreclosed properties, she said. Champion reported to her that in their initial search there were 1,700 active foreclosures in Jersey City and another 900 for which the initial data is not clear. That’s somewhere between 1,700 and 2,800 active foreclosures, and the city registered only 544. Once the contract is signed, Hendon and her staff will focus on the most important aspect that the registration requirements were meant to address: the condition of the properties, the rights of the homeowners, and the rights of the tenants on the properties.

“Very often in foreclosures, banks don’t know New Jersey’s foreclosures laws and will say unknowingly to a homeowner to contact their tenants and tell them the bank has taken over the property or some equally troublesome notice a tenant may get, when in fact tenants’ rights in New Jersey are very well settled,” Hendon said. “If a building is in foreclosure, it doesn’t change their rights as a tenant. We want to be on top of that,” she continued.