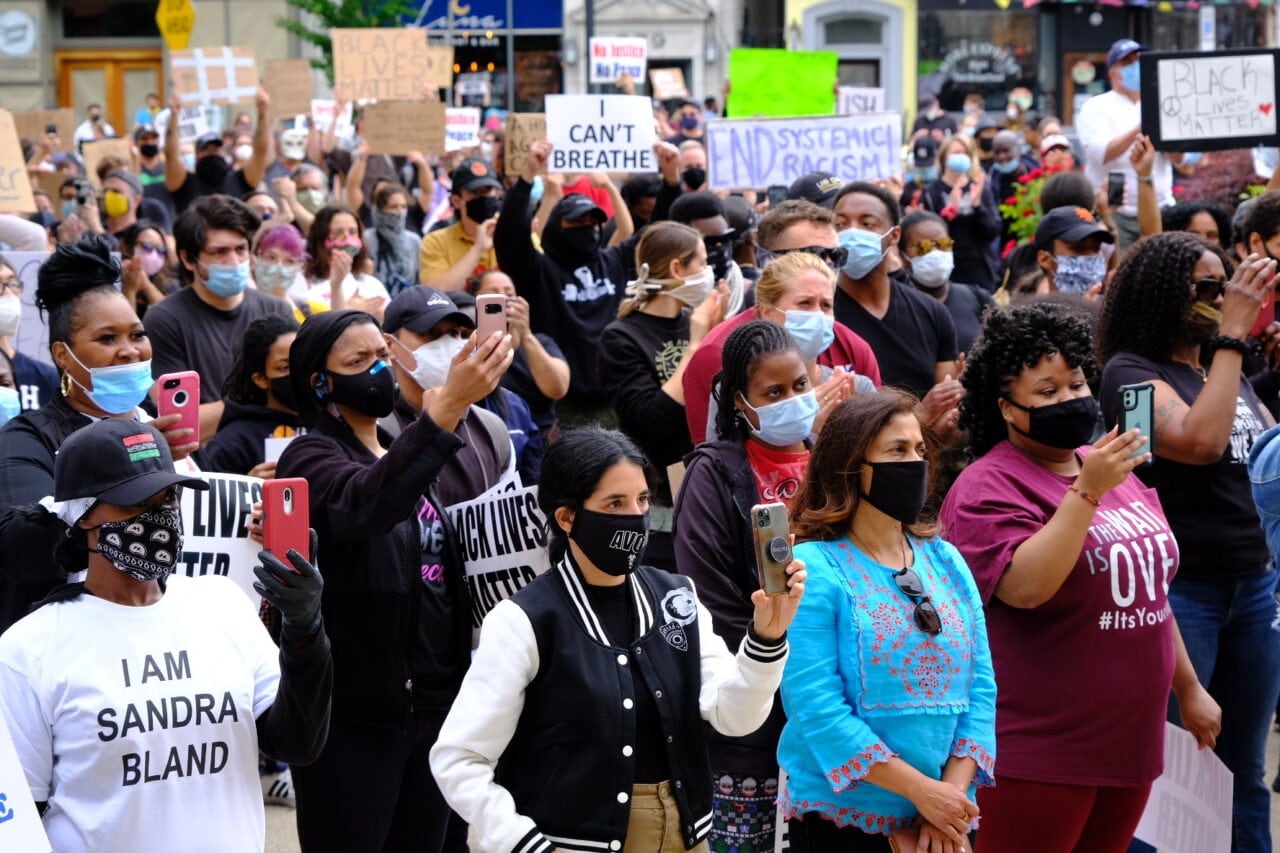 In the wake of recent protests spurred by the killing of Minnesota resident George Floyd, residents of Jersey City called on the City Council to divest the police department of funding and invest more money in social services instead. To that end, the council voted Wednesday night to pass a resolution, initiated by Council President Joyce E. Watterman, that establishes an advisory committee to review the department’s “policies and procedures relating to police enforcement and discrimination.”

“In May, the situation that happened to George Floyd was horrible,” Council President Watterman said. “Being a black woman, I know what it’s like to be discriminated against. To deal with racism, you have to start somewhere. It’s an ugly thing and not easy to tackle. We have an opportunity now to get rid of some of the ugliness black folks have been facing for centuries.”

The council voted to designate May 25 as Black Lives Matter Day. It also voted unanimously to appoint Elizabeth Castillo chief financial officer of Jersey City, to re-appoint Carlo Abad  chief judge of the Jersey City Municipal Court, and on an urban farming initiative and other ordinances and resolutions.

During the public comments section of the meeting, Jersey City resident A’driana Williams spoke to the City Council about attending a rally outside City Hall, last week, where more than 4,000 people voiced their support for Black Lives Matter. Williams and several other callers advocated defunding the police department and re-allocating that money to Jersey City’s public schools and to public programs that serve the needs of the community.

“I’m a student, and I know how much this district has failed me in terms of how much money has gone into the resources in our schools,” Williams told the council. “We have more security guards and police than nurses. We need to put more resources into our communities instead of more police. Our city’s budget is a reflection of its priorities. We need to show the city that our black citizens matter. Our education matters. Our tax dollars matter. Everything about us matters.”

Septuagenarian Doud David Williams said he believes a community review board is necessary to get rid of “bad apples” on the police force. He also said Jersey City police officers should be required to reside in Jersey City.

“If we had policemen who lived here, there would be a different attitude,” Williams said. “I remember Glenn Cunningham and Charlie Jackson, all of them lived in Jersey City in the black community. We need good policing and redistribution of funds that could go to social services that perhaps would be better in some areas than police.”

Another resident, Stanley Smith, presented a list of stipulations for police reform in the wake of the killing of George Floyd. He is seeking increased accountability for the use of excessive force, a community policing model that puts officers back on the beat, mandatory police de-escalation training, and increased mental health support for law enforcement.

Scott Welfel of Jersey City called in to say this moment in time presents a unique opportunity to re-imagine what Jersey City residents want from their police department.

“If you have a family member who suffers from addiction or has a mental illness and has an episode, who do you want to show up?” Welfel said. “Do you want someone with a gun who is trained with a command and control mentality, or do you want a professional and what they know about mental illness, what they know about addiction? What they know is to respond to this person as a human being to talk them down from that crisis, to get them the resources that they need. So, a council resolution that talks about an advisory committee? That is not re-imagining … no. Let’s take this moment to fully and fundamentally re-imagine the society we want to live in.”

The council voted 8–1 in favor of the resolution to establish an advisory committee with Ward C Councilman Richard Boggiano abstaining.

Up for a vote was a resolution authorizing Jersey City to contract with AeroFarms for $987,646 to construct and maintain indoor vertical gardens at 11 city-owned properties.

Back in September 2011, the city contracted with Friends of the Lifers Urban Farming Initiative to create a fully-sustainable hydroponic farm and farmer’s market in impoverished areas of Jersey City, but it was eventually abandoned. Now, the city hopes to grow vegetables (specifically lettuce) hydroponically to give away to Jersey City residents.

“We used to have community gardens; now they’re gone,” Councilman Boggiano said. “At a time like this, we don’t need this.”

Ward E Councilman James Solomon said he didn’t see the need to rush the resolution forward. “Without local job guarantees in the contract, there’s way more detail to go through,” he said.

Council at Large Rolando Lavarro, Jr.,  pointed out that although the vegetables would be free to Jersey City residents, they should only go to those in need.

“While it’s great the vegetables are free, I’m not sure of the cost analysis,” Councilman Lavarro said. “The one thing I will point out is that it is eligible to anyone who is a Jersey City resident, and I would urge Jersey City to put income qualifications on this. We should provide food for those who need food.”

The resolution was approved 6–3 with Councilmen Boggiano, Solomon, and Lavarro dissenting.

“That horrific incident prompted communities all over the globe to acknowledge the inequalities of black life in the United States,” Councilman Robinson said. “I grew up in a household where I was told by my parents I mattered. On May 25, the world recognized that black lives really matter.”

For other coverage of the Black Lives Matter movement in Jersey City, click here.