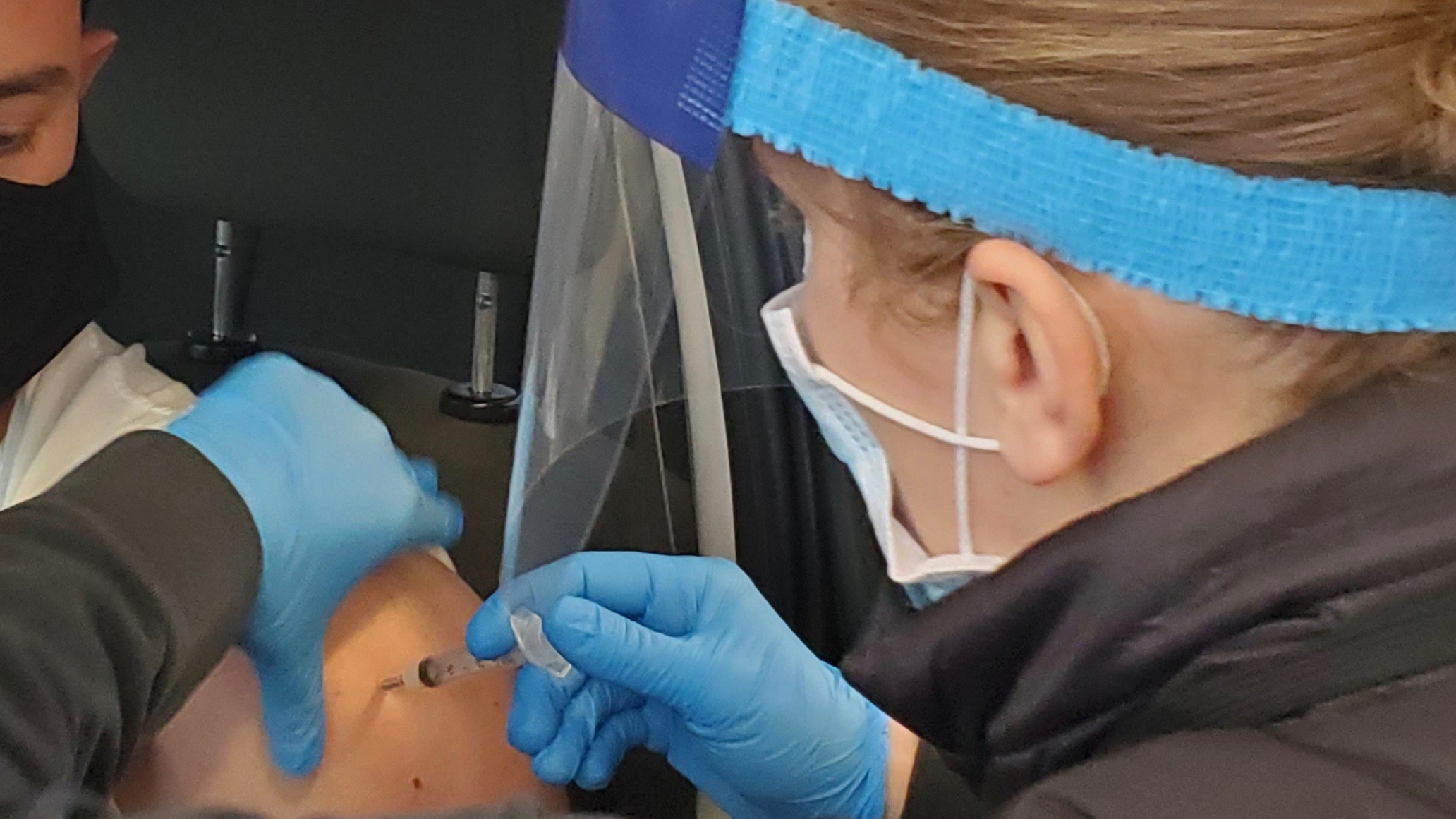 Despite a visit from Governor Phil Murphy Wednesday, local officials and residents are expressing frustration with the speed of Covid-19 vaccine distribution.

A few weeks ago, Jersey City — following a pattern set by other municipalities in Hudson County — designated a community-based facility as a place where residents could get vaccinated against COVID-19.

Given that the city’s Bergen Lafayette ward (along with Greenville) has consistently logged the highest number of new cases of the deadly virus in the city, Mayor Steve Fulop focused his attention there first.

He picked the Mary McLeod Bethune Life Center at 140 Martin Luther King Drive, which has been used as a COVID testing site, to launch the vaccination campaign. On Wednesday, Governor Murphy toured the Center with Fulop.

“We intentionally started with this location,” the mayor said, because it’s located “in the center of a predominantly minority community, which the state has had more difficulty penetrating with overall COVID vaccinations.”

Fulop, who has relied on Facebook and automated phone calls to get out his message, said the city is planning to set up facilities in every ward to give the shots when there’s enough of the product to go around.

“We allocated the money early, and the mechanisms are in place to get this moving on a broad scale as soon as we have the vaccines from the state,” Fulop said in a Jan. 28 Facebook post.  The city recently awarded a $1 million contract to Bespoke, a New York-based vendor, to help set up local vaccination centers.

In a lament echoed by other county and municipal leaders, the mayor said, “Our biggest challenge and frustration has been the lack of doses that have been provided by the state, and for this we have no control on the municipal level.”

Elaborating, Fulop said the state initially allocated “a total of 300 doses for the entire city” before apportioning another 500 in the second week of February and pledging to give 700 doses for the third week of the month.

Since Jersey City’s population is about 261,000, the state’s distribution “won’t get us very far at all,” Fulop said, although the mayor didn’t mention that the state is also supplying the vaccine to other Jersey City-based institutions including Jersey City Medical Center, Christ Hospital, Alliance Health Center, Metropolitan Family Health Network, and Riverside Medical Group Palisades, all listed on the state’s vaccine registry.

Getting an appointment for the shot has been a hit-or-miss proposition pretty much everywhere in the country due to the high demand and short supply.

After a few false starts, Jersey City residents can now call 201-547-5688 in the Division of Senior Affairs to get appointments for their first or second shots at the Bethune Center, where they are instructed to remain briefly in case of adverse reactions.

Fulop has also arranged to provide 12,000 free roundtrip Uber rides to and from the vaccine dispensary to seniors and frontline workers without the means to travel.

Responding to Fulop’s Facebook post, many residents, including Christine Sanchez, a disabled Downtown senior citizen, have pronounced the vaccine service a success. “I got an appointment right away,” Sanchez said. “It was very well run.”

H.K. Carol, a former president of Jersey City Public Employees Union, Local 245, characterized the operation as “smooth as silk” and praised the staff for executing “a well thought out plan.”

Journal Square resident Bill Armbruster found the program “very efficient” and added that the staff members “were quite friendly and professional.”

Some, though, like Downtown resident Judi Baller-Fabian, voiced frustration over the hardship of landing a time slot for the shot … anywhere. “I’m one of those over 75 and am signing up everywhere, including a wait list,” she said. “In the meantime, I’m just masking up, keeping my distance, and washing my hands and mask as soon as I get home.”

Residents Mary Cruz and Evelyn Santiago wondered when city teachers would be scheduled for vaccinations. “If I don’t get the vaccine, I will not be returning to work [in April],” Santiago, a teacher at Frank R. Conwell School (P.S. 3), said.

And Downtown resident Steven Rivellino griped: “I am a senior trying to get the vaccine for weeks now. My contemporaries in New York have already gotten their first shot. I have registered at numerous sites here in New Jersey, and they told me there are no appointments….”

Fulop said the city has “prioritized our seniors, first-responders, and those with high-risk pre-existing conditions, but the fact remains that the number of doses is inadequate.”

As of his Jan. 28 posting, only between 30 and 40% of municipal police and firefighters had been vaccinated, according to Fulop. Efforts to get an update were unsuccessful.

Lavarro acknowledged that while the supply situation is out of the city’s control, he said there appears to be “a lot of confusion among residents over how to get an appointment for the vaccine. People are calling all over and asking ‘how do I get it?’” He cited one case in particular of a woman whose parents had underlying medical issues trying desperately to book a slot. “I could hear her frustration and fear,” he said.

Solomon said he’d like to see more information about possible “missing” or “spoiled” vaccines, how the low supply of vaccines is impacting the city’s minority community, and what can be done to ensure an enhanced response to residents’ pleas for help. He said he realizes that the “ton of demand” for access to the vaccine may not be easy to satisfy but said “everyone trying to get an appointment should at least get a call back and be placed on a waiting list.”

Echoing Fulop’s lament about being left short-handed, Hudson County Executive Tom DeGise said that based on what he’s hearing from colleagues near and far, “There’s the same complaint in practically every city in the nation: They don’t have the dosages needed.”

And the same is true for Hudson County, DeGise said. On December 23, the county got an initial supply from the state of 3,500 doses for a population estimated at about 670,000. That’s approximately one dose per 200 people. “That’s not a great situation,” he said.

The following week, an additional 1,000 doses arrived, still just a drop in the bucket. And this past week, about 1,800 people received their first shots while 912 received their second.

“The mayors understand,” DeGise said. “You can’t get water from a rock. You can jump up and down and yell about it, but really there’s nothing you can do. The demand is overwhelming, and the supply is limited.”

At the end of 2020, Gov. Murphy toured the Juneau Center, 110 Hackensack Ave., in south Kearny to see how the county, aided by the Hudson Regional Health Commission, was running its lone vaccination site using a drive-thru protocol.

David Drumeler, Hudson County deputy administrator and COVID troubleshooter, has monitored the Juneau facility, which is open Mondays, Wednesdays, and Fridays, from 9:30 a.m. to 7 p.m.

Typically, Drumeler said, the center accommodates 12 cars at a time, and within five to six minutes the vaccinations are administered to the occupants. At that point, the vehicles are directed to parking spots where the occupants wait to be checked for any adverse side effects. Drumeler said he hasn’t seen any severe reactions.

People come from all over the county for the shots, but the municipalities with the highest percentage of registrants are Jersey City, Bayonne, and Kearny, he said.

Since opening its doors on Dec. 23, the Juneau Center has dispensed a total of 8,753 first doses and 1,247 second doses, according to a county press release issued Feb. 5. This past week, despite a massive snowstorm, about 1,800 people got their first shots and 912 received their second. Next week, the center figures to provide 1,800 first shots and 1,300 second shots. The second round is given after a 28-day interval.

To get an appointment, people must first register by visiting HudsonCOVIDVax.org.

“It’s the hottest ticket in town,” quipped Christina Butieb-Bianco, coordinator of the Hudson Medical Reserve Corps, who, along with school nurses, administers the vaccines.

The Telling Numbers: How COVID-19 has Hit Black Residents in NJ
Scroll to top