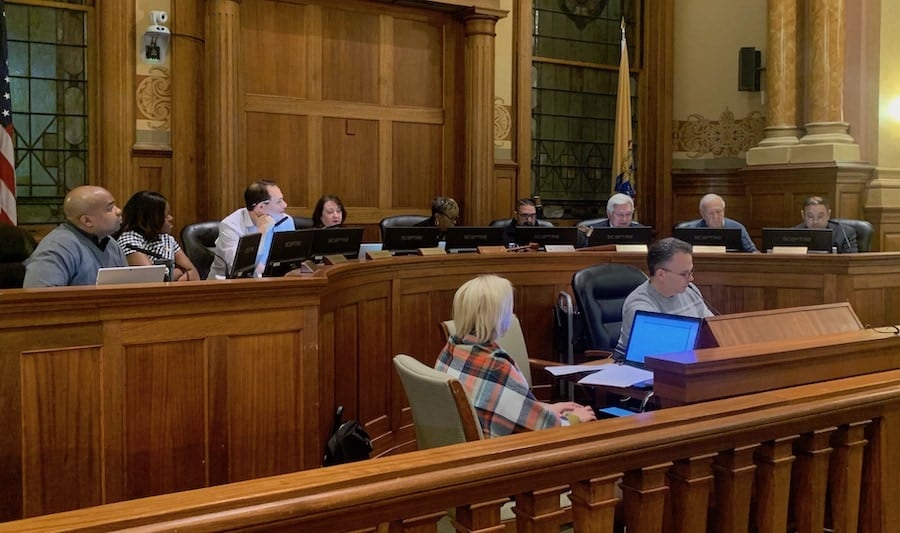 Last night, over five raucous hours punctuated by cheers, boos, and admonitions from City Council President Joyce Watterman, residents of Jersey City trudged up to the podium in the Council chambers to vent over the mayor’s proposal to turn the board of education into an appointed body. And vent they did. The proposal brought out teachers, union reps, activists, and parents, united in near-unanimous  opposition to the plan for a referendum that would put the question to voters.

Phil Rivo was notable as the evening’s sole dissenter.

“Right now, every year there is a board of education election. Every year, the teachers’ union is spending upwards of half a million dollars, and developers are spending half a million dollars for a job that pays nothing,” he said. Rivo then cited the five recent Board resignations before adding, “It doesn’t make sense. I would like to see professional people run it.”

If Rivo’s position was the exception, Josephine Paige’s was closer to the rule and highlighted a deep distrust of the mayor and his motives.

“A mayor who wants to change the democratic process is saying his judgment is better than the voters. I don’t want to see the board of education used to advance his political career.” 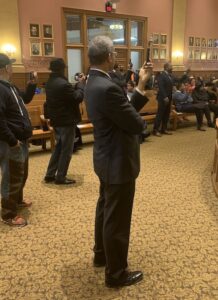 History teacher Lmani Viney likened the mayor’s proposal to the democratic rights that were ceded to Hitler, Stalin, and Napoleon. Maria Scariati, who recalled fundraising for the mayor, ascribed the proposal to the mayor’s “insatiable appetite for primacy.”  McNair High School athletic director Kristen Zadroga-Hart described the referendum as “nothing more than an opportunistic power grab.”  “It feels sneaky” quipped fellow teacher Colleen Kelleher. “This is straight out of George Orwell,” opined Natalie Ioffe, a parent and Soviet émigré.  Referring to past and present African-American school superintendents and board members, Jersey City Education Association President Ronald Greco accused the mayor of having “a problem with black men.”  Tracey Luz ascribed the plan as an effort to promote white supremacy. And so it went for the mayor.

The city council came in for criticism as well.

“What’s the rush?” Chris Gadsen asked. “When were you going to discuss it with the people who actually elected you?”  “Don’t let anyone on this council take your schools away from you,” intoned Daryn Martin. Jeanne Daly demanded to know which council members had “been bought.” Echoing several other speakers, Daly promised to exact revenge on councilmembers. “This is going to be a big problem if you move forward,” he warned. “This is a promise.”

Numerous speakers brought up the case of board of education member Joan Terrell- Paige, whose comments on Facebook following the kosher market attack were deemed by many to have been anti-Semitic and which brought calls for her resignation.

Daryn Martin promised to remember at election time that councilmembers Jermaine Robinson and James Solomon had done exactly that.   “No one is going to get a slab of Joan Terrell Paige. She is not raw beef. Four Hasidic rabbis were indicted for organ trafficking,” said Kabili Tayari. “Ms. Terrell didn’t say anything wrong,” added Kathrine Burno. Steve Goldberg, on the other hand, asked the audience to call out anti-Semitism. “You can hate me, you can hate a Jew, but you can’t hate Jews.”  On a night where speakers were cheered liberally throughout the evening, the room responded with silence.

Also in attendance and apparently on a p.r. offensive was a group of Hasidic men, armed with banners, proclaiming their biblical duty to be good neighbors.

“We condemn buying houses and throwing people out,” said Yoel Loeb. “It isn’t right to call people with concerns anti-Semitic.”

Fellow Hasid, Joel Eidlits explained that they had come to Jersey City because they “couldn’t pay the rent in Brooklyn.”  Eidlits and Loeb both distanced themselves from the Anti-Defamation League, the Chabad Lubovitch movement, and the “evil Jews who created the state of Israel.”

In the end, the council voted 7 to 1 with one abstention to move ahead with the referendum. James Solomon noted that in seven years, not a single board member had been elected without the help of a “super-pac.”

“The issues before the board are huge; the status quo is unacceptable,” Solomon noted.

Council president Watterman explained that she “has to answer to parents.”

Summing up the views of several other councilmembers, she noted that “the vote will give the city a chance to reach a consensus. Let the people say.”

As the sole “no” vote, Councilman Rich Boggiano said he had conferred with the board and was “confident” that it could do the job.

The audience did not take the vote sitting down.

When taunted by an audience member, Councilman Jermaine Robinson offered to settle their differences “outside.” Then when the audience was reminded that the JCEA had promoted the candidacy of twice-indicted board president Sudhan Thomas, a screaming JCEA President Ronald Greco rushed the podium under the watchful eyes of two Jersey City cops. Before being led out of the chambers, Greco accused the council en mass of racism.

The referendum will take place on November 3, 2020. If approved by voters, a new, appointed board of education would be seated on July 1, 2021.

Take a Walk on the Wild Side: Reservoir Park Upgrade Coming