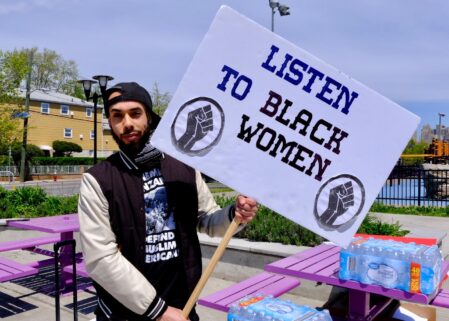 On May 10 at a rally to protest police brutality following the May 5 melee on Bostwick Avenue in Greenville, we briefly interviewed Hector Oseguera, candidate for Congress  in next week’s Democratic primary. Last week we reached out to Oseguera with some follow-up questions about his insurgent campaign but have not yet heard back.

With the recent presumed primary victories of progressive candidates over establishment incumbents in New York, we thought publishing the interview now, despite the lack of follow-up, would serve our readers. We reached out to incumbent Albio Sires for an interview as well.

JCT: Tell me about yourself and what brought you out today.

HO: I’m running for congress in New Jersey’s 8th district against a political boss, Albio Sires, who’s held this position for the better part of the last 14 years and doesn’t really have much of a presence in the district. Everybody I actually talk to tells me that he actually lives in Ft. Meyers [Florida], and I’m here supporting the brothers … who were disgusted by the incident of police brutality that happened just a couple of days ago.

When we put public trust in people, whether that be police officers or politicians, we have to hold their feet to the fire when incidents like this occur. And what I saw on video was clearly an act of brutality. I saw young men on the ground, face down, in a defensive position, being battoned. I saw what looked to me to be more of a WWF melee than an act of law and order. You can tell people to get on the ground, you can tell people to stop fighting, you can use words to de-escalate, you can even use physical strength to de-escalate. When I see people in a defensive position not fighting, taking a baton to the body, that looks like police brutality to me. And it’s an incident I think we’ve all seen repeated and repeated throughout history. And so when you see incidents like this, you know our communities are skeptical of somebody who says, “Well, he reached” because we’ve heard that excuse before. Well, he reached for a gun, he reached for whatever, he reached for a weapon. But the video honestly speaks for itself … I saw a man try to break up the fight and then have to retreat because he was being beaten by the police.

JCT: What should the mayor or public safety director do?

HO: The officers involved should be scrutinized. We should know if they’ve been involved in other incidents like this where people have brought up claims of them having beaten them. The police officers [involved] should absolutely not be on active duty right now. There should be full public transparency. The young brother Nevin [Nevin Perkins] who set this [rally] up has a list of demands, and I am in favor of all of those. We should have a community board that is not tied to the political establishment here in Jersey City that should review the tape, review the incident, take statements from the people who were there, and decide on whether those police officers should remain on the force or not.

JCT: Tell me about your background.

HO: I was born in Hoboken at what was then St. Mary’s Hospital, now Hoboken City University. Raised in West New York.  I’m an attorney. I work in the anti-money laundering industry, so my career has been spent combatting corruption in our financial system, and I want to extend that to our political system really soon. I work for banks, I usually work for banks in Latin America. I’ve worked for two Spanish banks, and now I work for UBS [Union Bank of Switzerland] … I spend my days reviewing wires and checking to see if the financial activity underlying those wires looks legitimate or if it requires additional scrutiny which could end in what is known in the industry as a “suspicious activity report” that goes to the Treasury Department.

JCT: Where do you live know?

HO: It’s going really well. In terms of the Covid, obviously our field operations have come to a halt. But at a time like this, campaigns are working off a digital-first strategy, and I think that that’s something that absolutely advantages a young, scrappy campaign like mine. My opponent doesn’t even have a website. If  you go to AlbioSires.com you’ll be directed to my fundraising page. He doesn’t have a website, he doesn’t have any kind of digital presence. He has neither a physical nor digital presence in the district. So, under normal circumstances a campaign like mine would be under a lot of pressure to overcome a financial disparity between an incumbent and somebody like myself. But at a time like this, those power disparities have really flattened because we’re all confined to the same digital spaces, which is the only real way to make any sort of real outreach.

JCT: When did you announce that you were running?

HO: In October of last year, so I haven’t been at this that long.

JCT: How do you plan to overcome the Hudson County Democratic Organization?

Covid-19 and Anti-Body Testing for the Far South Side

Will Summer Crowds at the Jersey Shore Unleash a New Wave of COVID-19?
Scroll to top
Subscribe to Our Newsletter