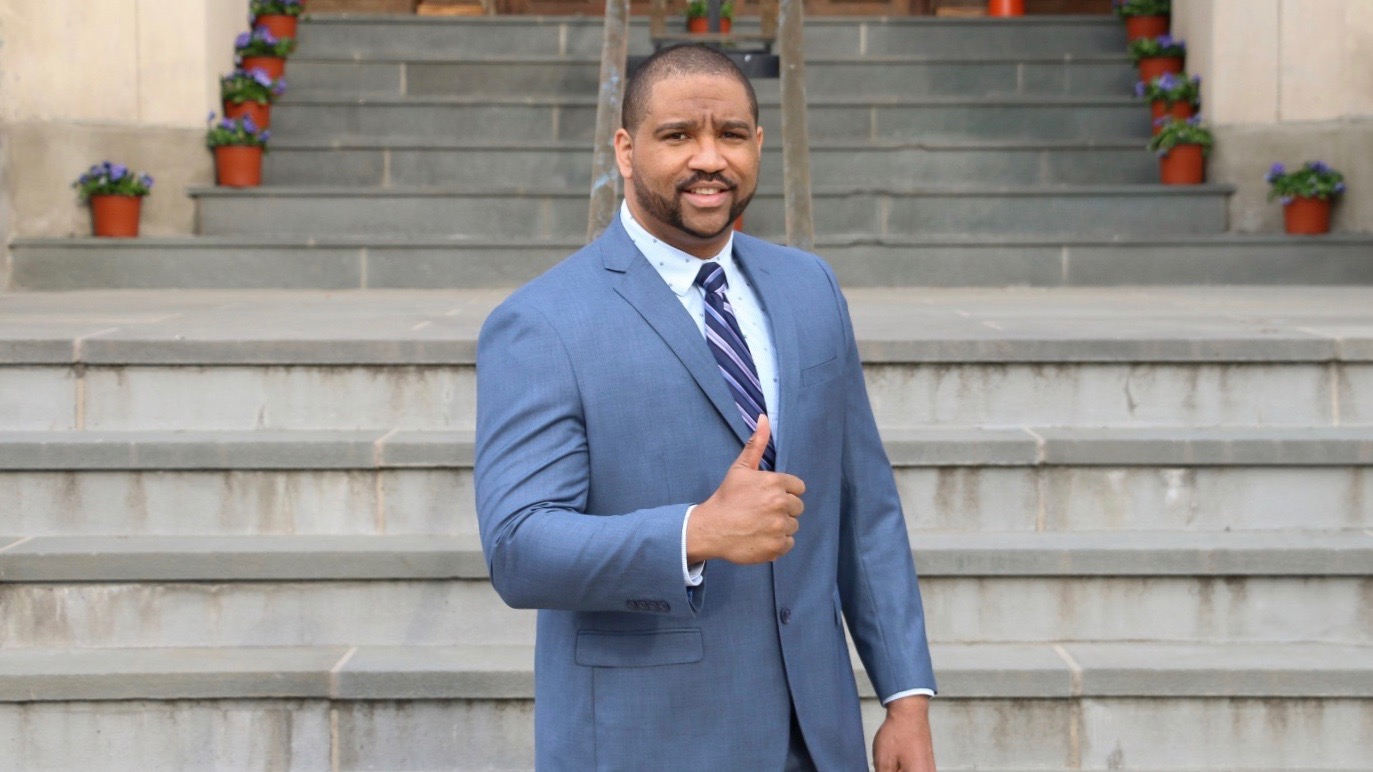 Earlier this month, the super PAC Hispanic American Commerce Association in Jersey City announced that it would be backing longtime resident and banker Elvin Dominici in his run for an at-large seat on the city council.

We sat down with Dominici for an in-depth interview.

JCT: You are running for an at large city council seat, tell me a little bit about your background?

Dominici: I was born and raised in the Dominican Republic. I came to this country when I was 21 years old. At the time I didn’t know how to speak any English.

JCT: What did you do when you got here?

Dominici: I went right away to Hudson County Community College. I started taking classes in Level 1 ESL and I was on my way to getting my associate’s degree in liberal arts. To me, that was amazing that I could come from zero and be able to get a degree. I didn’t stop there. I went to New Jersey City University and I started my B.A. in science and I was able to graduate in 2006. And finally, I went to St. Peter’s University and I was able to get two master’s. I have an M.B.A. in science and I have a master’s in accountancy.

I’m currently working at J.P. Morgan Chase. I’m a senior associate. I work in custody making sure that transfers and wires are settled for different markets.

JCT: How long have you been in banking?

Dominci: 16 years. My first job in the states was in U.P.S. I was lifting packages there for a year and half. It was tough but it taught me about discipline and commitment to do more with my life.

JCT: Tell me about your family. Married? Single? Children?

Dominici: Sure. I’m the father of three boys. I’m currently separated. My oldest son recently finished basic training with the National Guard. He’s already deployed to Washington after that issue that happened about certifying the election. I’m very proud of what he’s doing for this country and how far he’s gone.

My family to me is everything to me. Because the sacrifices that my mother made for me to have a better life and come to this country and seeing my children grow up in this beautiful city is something that is very touching to me and very important.

JCT: Have you been living in Jersey City for the entire time?

Dominici: When I came to the country, I lived in Union City for two or three years and then I lived in Weehawken for like two years. But I’ve been living in Jersey City since 2006.

Dominici: Yes. We were very active back when Hurricane Sandy came. We did reach out, especially to the Latino community where there isn’t a lot of knowledge of the municipality and the different programs that were available.

JCT: When you say “we” are you referring to yourself, friends, an organization?

Dominici: Back in 2010 or 2011 I created a PAC called Hispanic Political Action Committee, HPAC. It was for people committed to working on community activities. We had a group of people that worked to have a traffic light installed at Poplar and Summit which was, at the time, a very dangerous spot for children who go to P.S. 28.  We organized a team of people going and getting signatures. We were able to collect over 500 signatures. We did a study on how many accidents happened at the corner and how we could raise it at city hall. We liaised with the council at that time and we were able to get it approved.

JCT: So you’re involved in two different groups? Are they both PACs of is the other one something else?

Dominici: Actually there is one that is a small business association.  The name is the Hispanic American Commerce Association. Back in 2015 there was a person who died in Ward F in a bodega. After that there was rampage of the city giving out summonses and tickets to small businesses. They have over 300 to 400 businesses in the association.

JCT: So the association created the PAC?

Dominici: Yes. Because the association is not supposed to get involved in political activity.

JCT: Are you going to step down from the PAC if you become a councilperson?

Dominici: That’s a very good question. At the moment I’ve just been endorsed. I’m not part of the board of the PAC. Because I was involved in creating the association. So they know my capabilities if I actually get to City Hall, not only to the association but to all of the residents of Jersey City.

JCT: What would be the top five reasons you want to become a councilperson?

Dominici: Well the platform is still being developed. Basically there are three things that I, or we, believe strongly that we need to bring to City Hall. The first is accountability, the second is affordability and the third is to advocate for the residents of Jersey City and the small businesses of Jersey City.

But what we’ve seen for so long is that the council members have failed greatly their duty to defend, advocate and do what is best for the residents of Jersey City.

JCT: Give me some examples because that’s pretty general.

Dominici: We want to make sure we get affordable housing for low and middle income residents. We need support for homeowners and tenants who are struggling due to the pandemic. We need to get resources for the small businesses to help them to stay afloat until we get out of the economic crisis. Also the funding for the public schools and the other resources to make sure our children, especially those who lost academic support during the pandemic can catch up.

Also I care about the the city workers that were affected by the economic crisis and the pandemic and we’ve got to make sure that we don’t rush them back to the office without proper safety measures in place.

There are issues also with a high school that they want to build in Liberty State Park. It is unbelievable that we have almost one hundred residents going to a meeting online advocating different from what the city wants to do and at the end of the day we see our council members giving their backs to the residents and just voting in favor of the municipality’s agenda.

That’s something that is very sad. We need to find a way to bring the human touch back to City Hall.

JCT: As far as the Fulop administration is concerned, are they doing anything right?

Dominici: I can’t sit here and say that they haven’t done anything right. They have worked to make sure that the budget and taxes are stable. Even though we are debating the situation with the public schools. We the residents are expected to get a tax increase of a thousand dollars.

What wasn’t done in the past to avoid this? That’s what we have to look into.

I think the bike paths on the street are good.

Overall, the human touch and being able to go to City Hall and have an open conversation with the leaders is not what it should be.

JCT: What do you think about property taxes? Are they too low, too high or just right?

Dominici: We have to take a look at we’re doing with taxes. Are they fair based on the values of the property? Whether there are other loopholes or other sectors that can be taxed more like the multi-nationals that are sitting in the Downtown. If I’m not mistaken, there are something like one hundred and seventy eight tax abatements. I understand that they bring jobs and help the city in in different ways. But we don’t know how many of the jobs are going to people who actually live in the city.

JCT: Are there any areas where the city budget needs to be increased or decreased?

Dominici: I think we have to invest more money in the city, especially with the potholes and the streets. You can see the city needs a lot of fixing. Even if you go near where the mayor lives, you can see it’s a big mess.

I need to take a closer look at what can be increased. Recreation and more funding maybe for non-profits and people who are doing good work in the community.

JCT: What are views on public safety?

Dominici: I believe we have to see where the city can have more policing in areas that need to be patrolled. The police needs to be in closer touch with the community, especially in the Greenville area that we know is an area that we see more shootings and unfortunately people dying from crime.

We have two different tales. We have people living Downtown that they don’t even know that there are people in Greenville that are going through theses situation.

We need a plan of action. I have seen for many years that we are doing more hiring, we are giving more funding but the results are still the same.

Dominici: I assure you that I’m not going to take a penny from developers. If I were to do that I wouldn’t be running because I take this campaign very seriously. Definitely I’m going to have to take some money out of my pocket but mostly its going to be from donations from people who believe in this project and think that we can make a big change in this city.

JCT: I assume that the political action committee is going to be donating to you?

Dominici: I don’t know because we haven’t had that conversation. They’re going to do whatever they think is best.

Dominici: Absolutely. I’ve been working with numbers and budgets and making sure that financial transactions between the clients in emerging markets go through. So I can come in and look at numbers and actually have a better understanding of where the money is being spent.