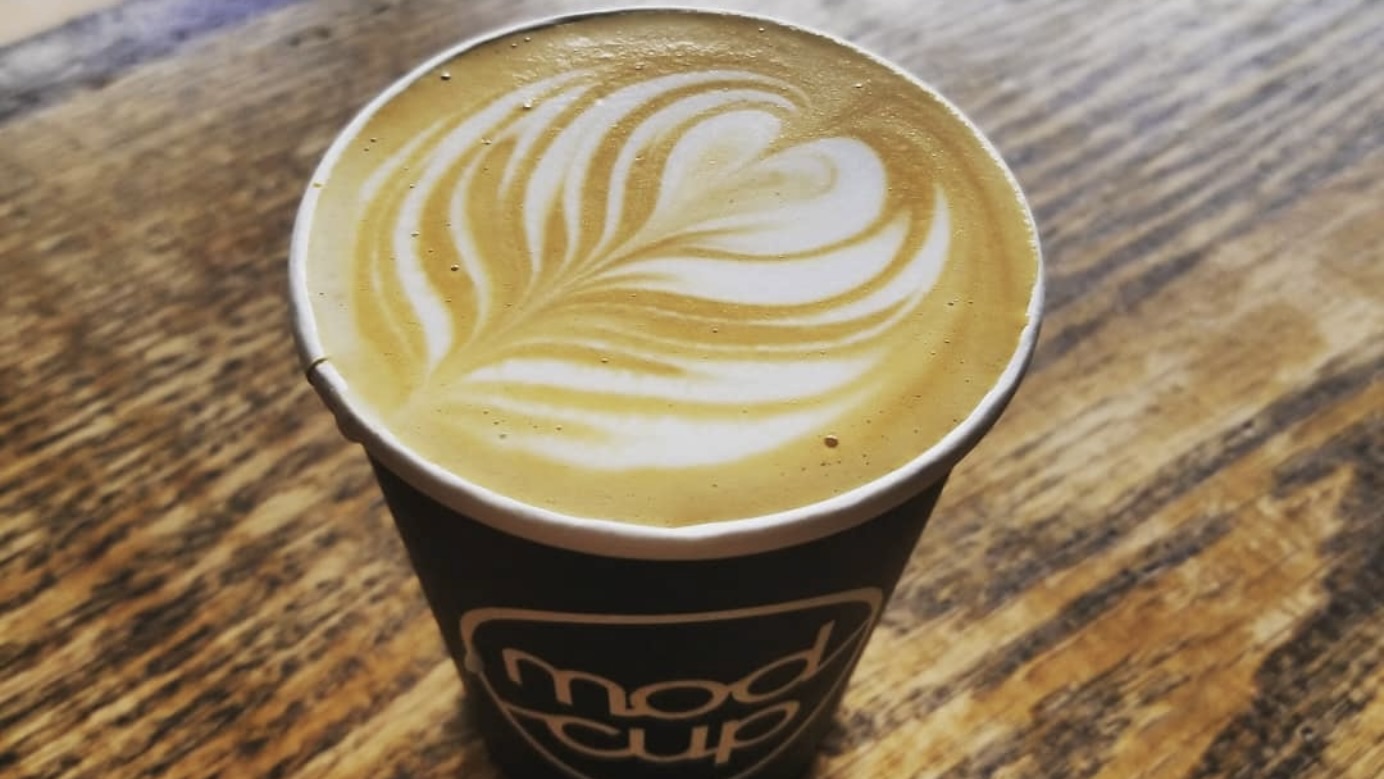 The word is getting out. Jersey City’s Modcup Coffee is garnering raves among java cognoscenti by sourcing, roasting, and brewing beans from the world’s great coffee regions — Ethiopia, Columbia, Yemen, Bali, Costa Rica and beyond.

Its main home on Senate Place in the industrial shadow of the hulking Pulaski Skyway is both a café and roastery. The aroma of freshly roasted coffee dances into the street as a persistent hum of crackling beans rattles in the background.

It is here that Travas Clifton, co-founder and owner of Modcup, and roaster Malcolm Marcial were able to craft two coffees that attracted worldwide attention landing in the “World’s Top 30 Coffees” of the year according to Coffee Review.

These coffees put Modcup and Jersey City on the specialty coffee world map, something no one else in the New York metropolitan area has been able to do since Maxwell House dominated the Hoboken waterfront for half the twentieth century.

According to Kenneth Davids, the editor-in-chief of Coffee Review, there isn’t a lot to write about the NYC-area coffee scene, but Modcup is an exception. “Modcup sources and submits to us for review small lots of superb, exceptional coffees very skillfully roasted,” he said. The Berkeley, California based publication has been reviewing specialty coffees since 1997.

Clifton, a tall, dashing Englishman who would have fit on Sir Francis Drake’s globetrotting ship, inspires both the coffee connoisseurs and the newly curious. “I absolutely love watching people’s faces when they first sip one of our coffees,” he says in his enthusiastic English accent. “Puzzlement turns into wonder and then understanding that something amazing is going on here.”

Clifton has a missionary’s zeal , and why not when a seemingly ordinary cup of joe becomes a celebration of strawberries, mangos, or chocolate? “That is what we are searching for when we roast beans from around the world,” he said. “What can we do to bring out the best flavors? We are obsessed with making this happen.”

That daily charge belongs to Marcial, whose wild hair screams mad scientist. He mentions “attention to detail” in almost every breath about Modcup ‘s roasting process. At 24, Marcial is young for an elite coffee roaster. He is happy to help put Jersey City on the specialty coffee map.

The louder the slurp…

ModCup prides itself on its light and medium roasts, results they obtain by meticulously controlling how hot and how long to roast the beans before they “hit the second crack.” Were that to happen, the beans would wind up dark roasted like most of those sold by Starbucks and Dunkin Donuts, which Marcial eschews. “We don’t want to do that,” he smiles.

Finding that optimum sweet spot starts with “cupping.” Beans, which arrive at the Port of Newark in burlap bags straight off cargo ships from Africa, Central, and South America, are roasted at varying temperatures for various times to identify the optimal protocol for each variety. Clifton, Marcial, and Modcup barista Christopher Ortiz then proceed like jedi masters using “the force.” They blind-taste-test and identify flavors by slurping spoonfuls of freshly brewed coffee to the backs of their throats aiming to slurp as loudly as possible for maximum sensory impact.

“It hits your palate like electricity,” says Clifton, explaining how a coffee’s flavor profile can be determined. “Your imagination is awakened to all kinds of exotic flavor notes: jasmine, mango, papay, chocolate, raspberry, vanilla.”

Ortiz is also 24. He became friends with Marcial while attending County Prep High School in Jersey City before they both started working for Modcup after graduation. “Learning from Travas, we’ve been on this amazing coffee journey together,” he said. Ortiz has a professor vibe despite his youth (and probably because of his spectacles).

From Great Britain to Jersey City

The journey for Clifton began in his hometown of Birmingham in the industrial heartland of England where like most people he viewed coffee as a “caffeine-delivery device.”

“I had never had a proper cup of coffee in my life,” he said, until he stumbled upon a black coffee from Bali while living in Toronto. “It tasted like fresh strawberries,” he said in amazement. “I couldn’t believe it: Coffee could be sweet.”

Clifton had spent years traveling the world working on cruise ships, but from that moment in Canada he started dreaming of the coffee business. Marriage and a baby girl led him to settle in Jersey City.

His first idea was to roast the beans off a truck and serve it fresh right there to the customer. But at temperatures that can hit over 400 degrees Fahrenheit, that proved impractical if not a bit dangerous. Instead, together with ModCup co-founder Justin Hicks, in 2013 Clifton started roasting different coffees from faraway places in a garage on Jefferson Street in the Heights and serving it the next day from a coffee cart on the Hoboken waterfront. The punk rock energy and rave reviews convinced them to push the dream.

Less than a year later, they opened Modcup on Palisade Avenue across from Riverview Park with views toward both the Empire State Building and One World Trade, quickly becoming the focus of a budding Jersey City neighborhood.

Business boomed, and Modcup opened additional locations near Exchange Place and Journal Square. Hicks left Modcup before the pandemic to move his nascent family back to his native Ohio leaving Clifton to navigate the new normal. In the meantime, Modcup developed a strong online business selling beans all over the country thanks to the attention their award-winning coffee garnered from Coffee Review. “We even send our coffee to cafes in Korea and Japan,” he said.

There, alongside coffees from famous roasters like Norwegian Tim Wendelboe, Modcup represents Jersey City in the coffee universe.

Many of Wendelboe’s beans are served in New York’s three-star Michelin restaurants. “Why not Modcup in these New York City restaurants, mate?” wonders Clifton.