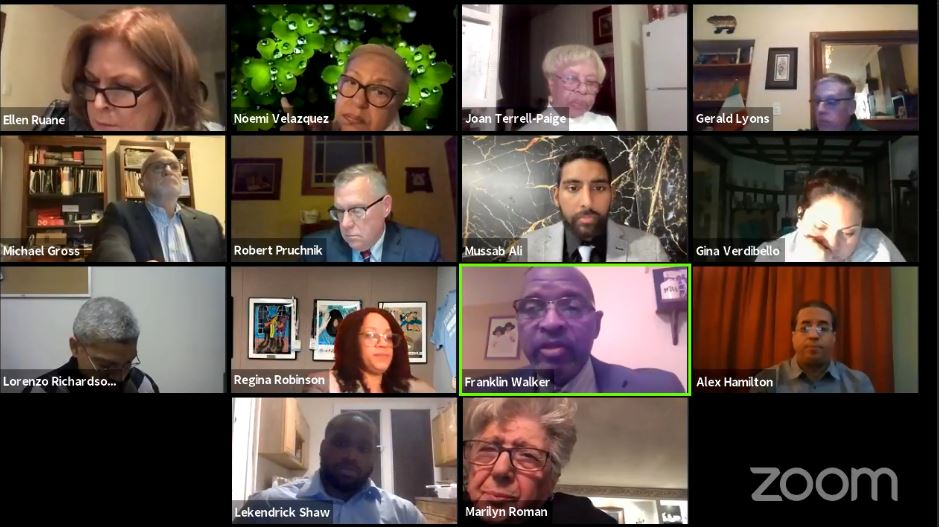 The Jersey City Board of Education has until tomorrow to decide whether to approve a $827 million budget that fully funds the city’s public schools and raises the school tax levy by $103.7 million.

The proposed budget presented by Superintendent of Schools Franklin Walker at Monday’s public hearing uses $100 million from a state “banked cap” to help close a $117.3 million projected shortfall for the 2021-22 school year. It would help fund a trauma-sensitive schools program, bilingual education, summer enrichment and a 3:1 device initiative among other services and would raise school taxes on the average home by $1,168 per year or $97 per month.

The board has a deadline of Wednesday, March 17, to vote on the budget, which will then be sent to the county superintendent. A virtual board meeting with a budget vote is scheduled for Wednesday at 6 p.m.

“We must reframe educational equity by breaking down the barriers to learning that existed long before the pandemic, and now the health crisis has exacerbated,” said Walker on Monday.

Jersey City Public Schools educate more than 30,000 students, including 3,800 with English as a second language, 3,900 with special needs and 16,000 who qualify for free and reduced lunch.

The schools have been underfunded for the past decade, board president Mussab Ali said at a previous budget hearing. The district is facing a $71 million cut in state aid and the city has only committed to providing $65 million in payroll tax to the schools.

Every member of the public who spoke during the meeting asked the board to support a budget that fully funds the public schools. But school board members had conflicting opinions on using the banked cap, which allows districts to raise school taxes above the state’s 2% cap on increases by using saved additional taxing authority not used in prior years, according to New Jersey Education Aid.

Trustee Noemi Velazquez said those who have a problem with taxes do not own homes and are worried about rising rent costs and gentrification. Trustee Gerald Lyons said the board hears from city residents who are “hanging on by a thread” and cannot afford a tax increase.

In his presentation, the superintendent said a failure to use the banked cap underfunds the budget “and we lose a once in a lifetime opportunity to permanently add $100 million to our revenue base.”

Nancy Pokler of civic group Jersey City Together highlighted that the city allocates just over 25% of its budget to the school district and 50% to the municipal budget.

“In most other parts of New Jersey, you’ll see those numbers flipped,” Pokler said.

Megan Howard Noveck said the blame that can be placed on city leaders is well-understood and documented, but “the part we don’t talk about enough is just how low our school tax rate is.”

“As our tax-paying property base has rapidly grown over the past few years, our public school tax levy has not nearly kept pace with that growth,” said Novek.

Noveck and other members of Jersey City Together who wrote Facebook comments on the live-streamed meeting said the way to get the city to increase its funding of the schools is for the board to raise the local tax levy.

Trustee Lorenzo Richardson made comments supportive of this tactic. “We have to raise the levy and we have to force the city to deal with it,” Richardson said.

Trustee and former mayor Marilyn Roman encouraged board members to start an awareness campaign and pressure city officials to direct more funding to the schools.

Board president Ali originally told board members a second budget would have been presented at the hearing, but administrators did not produce that alternate option. He directed the administration to develop a second budget with a lower proposed tax levy by tomorrow, identifying more limited-time expenses that could be covered by government or grant funds.

Walker and Regina Robinson indicated they will work on adjustments to show the board at Wednesday’s meeting.