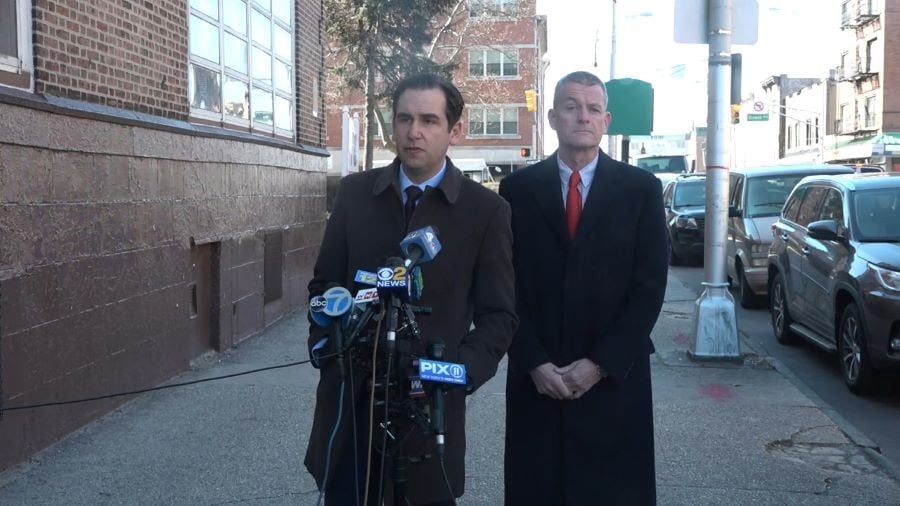 Jersey City Mayor Steven Fulop said police bodycam footage from the scene of the horrific Dec. 10, 2019, shooting at the Jersey City Kosher Supermarket at 224 Martin Luther King Drive showed that his city’s cops went above and beyond in exposing themselves to possible harm.

At a brief press conference held Friday, Feb. 21, directly across the street from the still-shuttered shop, Fulop, accompanied by Jersey City Public Safety Director James Shea, said the newly released tapes “only reinforce a lot of what we said in the days after the Dec. 10 incident … that we are exceptionally proud of how police officers ran toward danger and how they communicated with each other.”

The attack on the market by two radicalized anti-Semitic shooters identified as David Anderson, 47, and Francine Graham, 50, ended with both assailants dead along with the shop’s co-owner, Mindy Ferencz, 33; an employee, Douglas Miguel Rodriguez, 49; and a customer and rabbinical student Moshe Deutsch, 24. Police said Jersey City Det. Joseph Seals, 39, was shot dead by Anderson and Graham a short time earlier in Bayview Cemetery.

Two other Jersey City police officers – Ray Sanchez and Mariela Fernandez – were wounded during the multi-hour gun battle. Shea said on Friday that Sanchez had elected to delay surgery to repair his shoulder wound so he could attend Seals’ funeral. He has since had the procedure, Shea said. Fernandez suffered an injury to her right hand, according to Shea.

Fulop made his remarks to a phalanx of local and out-of-town news crews the morning after the state attorney general’s office released a total of seven videos (as reported by several TV news media outlets) taken from police bodycams at the shooting scene.

Asked by a reporter if the city felt “blindsided” by the attorney general’s decision to make the video available for public consumption, Fulop replied, “We were a little blindsided, I don’t want to mince words,” but added: “We do feel that’s their prerogative. It’s important to be transparent.”

The mayor said he received an email the night prior from the attorney general’s office advising the city about the tapes.  He also said the city learned that the victims’ families were notified prior to the tapes’ going out.

Elaborating, Shea said the city “confirmed (the families) were spoken to, and they were comfortable with the release.”

In any case, Fulop observed, “We couldn’t be more proud” of the way Jersey City police officers reacted to the threats to public safety.

In an interview with a TV newsman, Shea said an examination of the images captured by the bodycams made him feel “very confident that all of our officers acted heroically.” He said that as more information is released, the department would expect to learn more.

Meanwhile, the mayor said that to ensure the police continue to be in a state of readiness for any similar incidents in the future, the city would continue to invest in active shooter training, some of which will be carried out this year.

Excerpts from some of the footage broadcast recently by New York-based TV news stations show a man and woman emerging from a van parked along Martin Luther King Drive, carrying long guns aimed at the market and striding inside.

Other images depict a police officer ensconced inside an upper-floor classroom at Sacred Heart School, located across the street from the market, firing multiple rounds from a handgun aimed at the shop. The officer, speaking into a communication device, identifies his shots as friendly fire.

Various collections have been set up on behalf of the victims, and the City of Jersey City announced that it would help pay off the mortgage on the Seals family home in North Arlington.