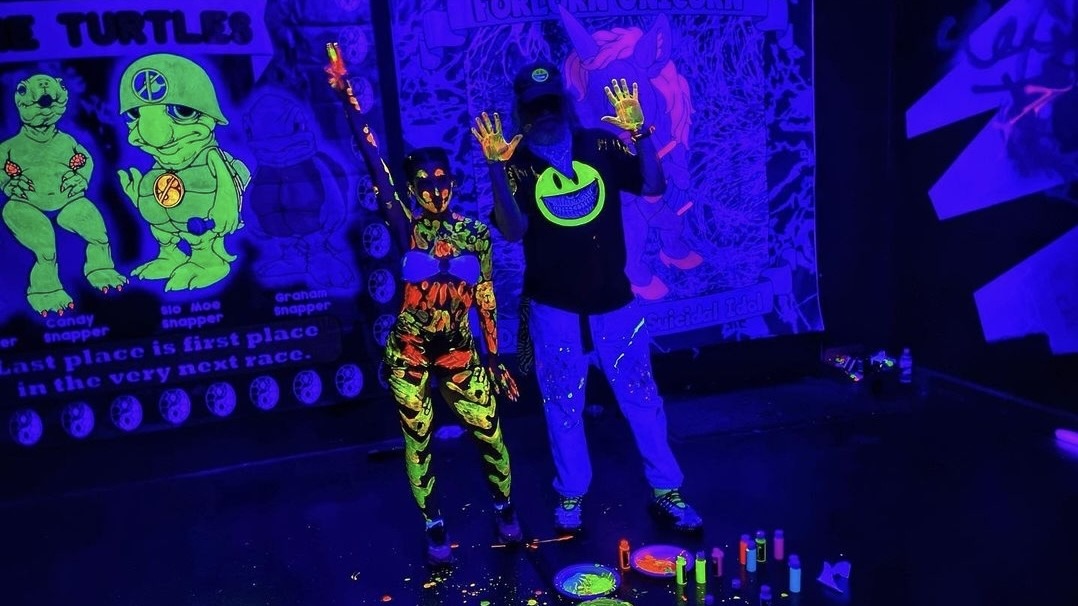 The other night at an otherwise impressive event hosted by The Jersey City Art & Studio Tour (JCAST), attendees watched ​former Jersey ​City resident Ron English​​ apply fluorescent paint to a female body. ​ She wore what appeared to be underwear and a bikini top while Mr. English placed his hands, dipped in paint, on every exposed part of her body. This was done in a room off the main gallery in complete darkness but for black lights illuminating the fluorescent paint. ​Through the dim light I caught the eye of another woman in the room and we looked at each other as ​though to say, ​”Is this entertaining?​”​

Abruptly, we​ walked out of the building to get some fresh air. However, we couldn’t escape the scene ​as it was simultaneously ​projected on a large screen​ as the event’s centerpiece, around which many danced, smoked and socialized​. More women joined ​our circle and watched the performance unfolding before us on the giant screen. There was a uniform expectation that we were supposed to be watching something creative, edgy and very “street.”  Yet every one of the women expressed unease, turning away, uncomfortable watching the spectacle.

Was it that Mr​.​ English, a respected and reputable artist, didn’t need to be laying his mitts on a woman for anyone’s aesthetic gratification? ​Was it an insult to his reputation and caliber of talent?​ At the same time ​there ​was something about the act that felt distinctly gratuitous.

This group of women caught a whiff of something antiquated and possibly offensive. In all fairness, there were three men who opted to get painted by English, but they received a hand to the clothed chest, a pat on a hat, and a smear on the face. To my knowledge, no male participant disrobed in order to be anointed in fluorescent paint.

There are other ways to paint on bodies — if that was truly the goal. ​Also presenting work for JCAST was Australian artist, Georgina Billington who, as a former make-up artist, states that she “presents body-painting as a way to transform her subjects into art.” Her work, displayed as photography, left a whimsical impression — very different from a live body-painting event.

British artist Sophie Tea paints female nudes all sorts of candy colors, yet is committed to presenting women with all kinds of body types and who have experienced all sorts of journeys, such as transgender women and breast-cancer survivors. Tea’s participants are also naked except for underwear and body paint, but they confidently parade down a catwalk.

Billington and Tea make personal statements about body issues and celebrate differences and transitions. Also, note-worthy is neither woman, in photos of them working, appears to be painting with her hands.

Ron English is an activist artist. His body of work, from paintings to murals to perverse figurines, is replete with distortions of brand imagery, like so many “Wacky Packages” made 3-D. When you look at them you can’t help but rethink the commercial images that bombard us daily. He doesn’t celebrate greed and consumption; he pokes a jaundiced finger at it.  Was Mr. English making a statement about women as commercial commodities? If so, that was not articulated.

It doesn’t matter that the women English painted swear up and down that they participated willingly: We believe that. The question is why it made several women feel distinctly “cringy,” in their words.  Said Katie Welles, a 20-something Jersey City resident, “I felt this event invited us to participate in the objectification that we feel every day as women. I’m not criticizing any woman who chose to partake in this activity. It’s just the act of watching it made me feel complicit.”

In 1983, Keith Haring, one of the first celebrated American street artists, painted the naked body of choreographer and dancer Bill T. Jones. Jones described the act of being painted as something akin to an indigenous ritual. “I felt powerful,” he said. “I felt like an Aboriginal man, like a shaman.”

Yet, in the same breath, he said how uncomfortable and vulnerable being painted publicly made him feel. “What does it mean to be a black man — in a room full of white people — completely naked? I tried to imagine what is incorrect about this. I don’t know if we really knew at the time.”

Some of us witnessing a similar event last Saturday wondered the same thing: “What is incorrect about this?” Street art, on its ever-roving canvas of opportunities, lands all too conveniently on female flesh. ​Inherent to graffiti is the element of vandalism; and by definition “vandalism” is “damaging property that does not belong to you.”  It would be a stretch to imply that English damaged the women he painted at the JCAST show, but our collective feminine psyche registers the imprint of not only Mr. English’s hand, but the presumption that this version of body painting is entertainment.