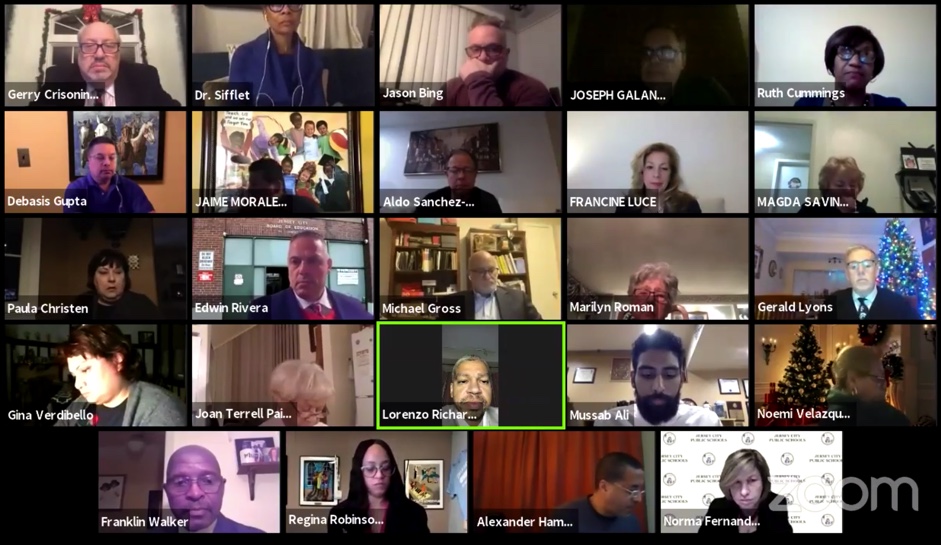 There was no discussion during Thursday’s Jersey City Board of Education meeting about when public schools might reopen for in-person learning. Superintendent Franklin Walker has previously said that schools won’t reopen for live classes before February 2nd.

The subject was touched on obliquely by Trustee Mussab Ali, who noted that the FDA has yet to approve a Covid vaccine for children under 16. Trustee Gerald Lyons questioned whether vaccinations will be a requirement for staff and students. He added that policies will need to be established.

While several large cities including New York, Washington D.C. and Chicago have rolled out in-person learning without a vaccine, a debate over whether it should be suggested or even mandatory has broken out.

In other matters, President Lorenzo Richardson and Superintendent Franklin Walker spared over $35,000 thousand in raises for 12 non-union employees who report directly to the superintendent. Walker first requested the raises in June.

Walker, apparently eager to bring the matter to a close, claimed that the Board was violating district protocol by not pursuing his recommendations. Richardson argued for taking up the issue up in closed session, as did Corporate Counsel Michael Gross who said that Mr. Walker’s public comments put the district in legal jeopardy. Another attorney, General Counsel Bryant Horsely disagreed, saying that Walker’s comments were not a problem. Ultimately, Richardson’s position prevailed and the discussion was put off.

The board will hold its reorganization meeting as a virtual meeting on Tuesday, January 5 at 6 p.m.

The next virtual Jersey City School Board meeting will be held Thursday, January 28, at 6 p. m.

When it Comes to Marijuana JC is a VIP