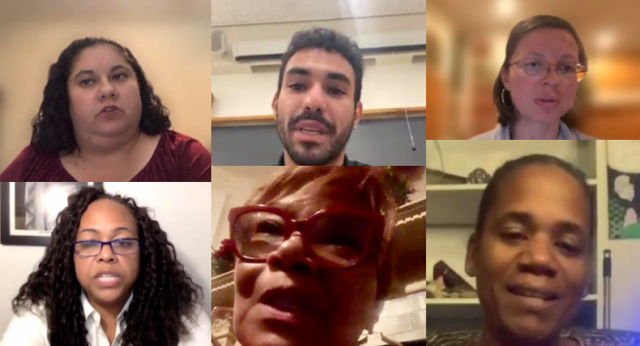 Candidates for the Jersey City Board of Education shared their ideas for addressing a teacher shortage affecting the city’s public schools at a virtual forum held by Infinity Institute parents Tuesday night.

Jersey City’s teacher shortage also loomed large at Monday’s school board caucus meeting at which Superintendent of Schools Franklin Walker said 120 new teachers had been hired this year but that others had retired or resigned.

Walker also noted, “Many of the vacancies in the Jersey City Public School district exist in schools located in neighborhoods with the lowest income.”

According to the U.S. Department of Education, the state is currently short of teachers of English as a second language, world languages, math, science, career and technical education, and special education.

At Tuesday’s forum Infinity Institute parent and moderator Jed Ehrmann asked the candidates who attended — Younass Barkouch, Natalia Ioffe and Paula Jones-Watson of the “Education Matters slate, Erika Baez and Doris ‘Toni’ Ervin of the “Change for Children” slate and independent candidate Afaf Muhammad — how they would address the shortage if elected.

Ioffe said one of the simplest and fastest ways to address the shortage would be for the board to create a program designed to recruit new teachers from local colleges.

“As some parents who are here today, they have affiliations with various universities here in Jersey City, whether it’s Hudson County Community College, NJCU, or St. Peter’s, our district has yet to build this kind of connection, a bridge with these universities, when it comes to recruiting potential teachers, who may already be studying to be teachers.”

Baez said a $5,000 signing bonus for new teachers, which the superintendent tried to implement in August, should be reconsidered. She also proposed a technological solution:

“There’s no reason why we cannot have teachers in the subject needed teaching their own class and being broadcast so that the students without a certified teacher can join in that class.”

“There are many people in the workforce that may be leaving corporate America, and teaching may be an idea that they have, such as business teachers, bankers and things like that. We may have to consider some of them.”

Ervin recommended reducing the teacher shortage by promoting to the district’s current non-teaching workforce the alternative-path to certification and offering tuition incentives and “liaisons” to support new teachers.

“Within our schools, there are staff members who would like to become teachers, but they just don’t know the process,” she said.

“Teach for America offers [college graduates] the opportunity to get their Master’s and only pay a portion of the cost. So I think that’s definitely something the district should explore. But obviously, we’re gonna have to go back and check to check the budget, do a forensic analysis of the budget to see if money can be allocated towards these programs,” Barkouch said.

Ehrmann, the moderator, asked the candidates whether they would be willing to amend the current contract between the board and teacher’s union.

Baez said she is willing to consider it.

“If that does mean renegotiating the contract for the starting salary, then it should be done,” she said, “because this is our children’s future we’re talking about.”

Younass Barkouch said, “I want to state that I’m not certain if the contract can be amended before it ends.”

He said with short-term solutions, the district runs the risk of “hiring teachers who aren’t necessarily as good as the ones that we already have. I’m more focused on long term solutions.”

Man Charged with Manslaughter in Greenville Death
Scroll to top