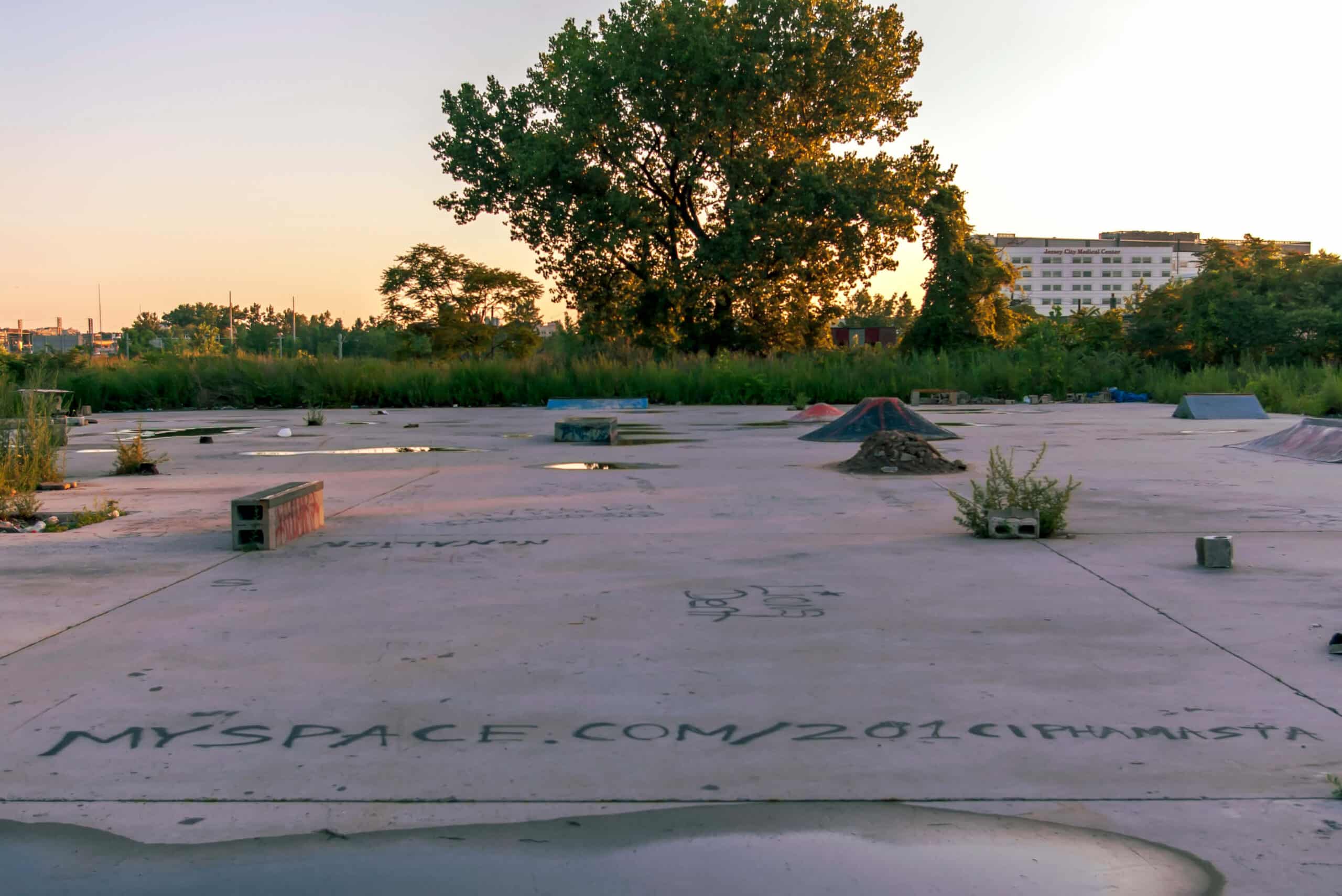 The new Berry Lane skate park can trace its origins to the DIY grassroots work of a few intrepid boarders and neighborhood activists. Above is a DIY park that I photographed in July 2011. The concrete is, I can only assume, the floor slab of a demolished industrial building. It is located near one of the remaining fragments of the Morris Canal in Jersey City. The Hudson River is no more than a half mile to the left. Notice the Myspace URL at the bottom of the photo.

DIY parks have been an aspect of skate boarding for a long time. There aren’t enough purpose-built parks to meet the demand. People don’t like skate boarders using public sidewalks, plazas, parks, shopping centers and streets, and skate boarders don’t like be harassed for doing what they love. What to do? Find an out-of-the-way spot and build your own park.

At the time I took that photo I had been about four years into an effort to create a public poured-in-the-ground skate park in Jersey City. That effort finally came to fruition on August 6, 2020. 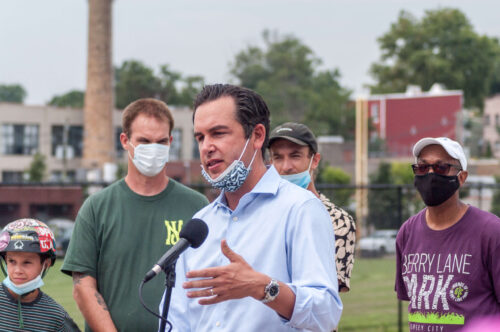 At the center of the next photograph we see Jersey City’s mayor, Steve Fulop, speaking at the opening of the park. The man to the left is Steve Leonardo, who owns a local skate shop and who helped the city obtain a grant from the Tony Hawk Foundation to build the park. The man to the right – didn’t get his name, I wasn’t taking notes – represents the Friends of Berry Lane Park, a citizen’s group that keeps an eye on the larger park in which the skate park is located. You’ll see the man behind the mayor in one of the photos later on.

Once upon a time…From a Skate Park to the World

Back in 2006, when I was living in the Hamilton Park neighborhood, I became interested in photographing graffiti in Jersey City. About a half mile from my apartment I happened upon a site nestled up against the Jersey Palisades beneath Christ Hospital.

If you look closely at the wall you’ll see ramps for a skate park. There are other features on the slab itself. 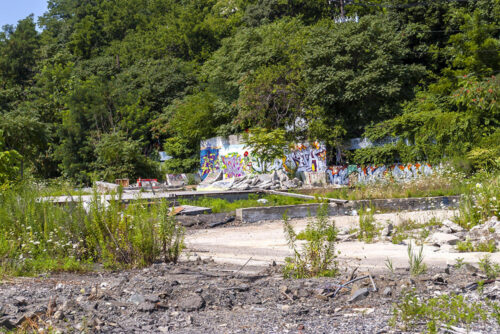 One day, sometime in the middle of October 2007, I went by the spot to see if there was any new graffiti and saw that the floor slab had been demolished.

The DIY skate park was no more. A couple weeks later I saw a hand-lettered sign on the fence inviting passers-by to a meeting at city hall to discuss ideas for a new park. While I had no particular interest in skate boarding I was curious: “Who at city hall gives a damn about these kids”? I put on my banker’s suit, dark blue flannel with white pin strips, and showed up.

As I suspected, the meeting had been called by Steve Fulop, then a young reform-minded councilman who represented my neighborhood. As only four skate boarders showed up, Fulop decided to schedule a new meeting for Nov. 19, 2019. I offered to donate an annotated set of site photos to the councilman and to the public library, which I did.

I’d guess there were 30 to 40 people at the next meeting. There were teens, young adults, some older skate boarders and a few parents. Fulop agreed to push for a new park to be built by the city. Where should it go? After some deliberation the skate boarders suggested a site beneath the thruway at Seventh Street and Newark Avenue. 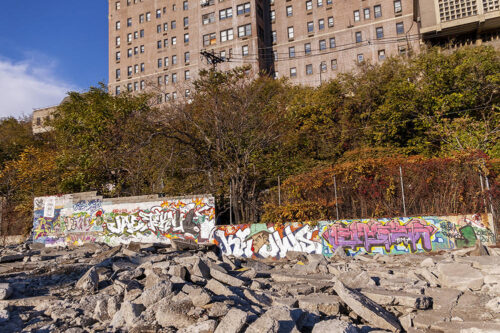 Fulop got in touch with the New Jersey Turnpike Authority and got a favorable response. Meanwhile I had been thinking and thinking. The spot chosen for the park was only a couple of blocks from the Sixth Street Embankment, an abandoned railway structure six blocks long running East-to-West in downtown Jersey City. A group of citizens had been working hard to acquire the embankment from a developer – a complicated story including heartache and messy details, too much to slip in here – and turn it into an above-ground multi-block-long park – a bit like Manhattan’s High Line, which didn’t exist at the time.

I figured that if we’re going to turn the embankment into a park, it would be easy to extend it over to Bergen Hill, pick up the skate park, go along the hill a quarter mile, and then through the Bergen Arches, a mile-long man-made canyon running through the city. Why not connect it all into a two-and-a-half-mile park extending through Jersey City from the Hudson River to the Meadowlands?

I spit-balled the cost of such a project – a quarter- to a half-billion dollars (big bucks for Jersey City) – and estimated the potential tourist revenue – perhaps $90 million a year – and wrote a report: “Jersey City: From a Skate Park to the World”. I showed the report around, gave a copy to Fulop, and put it online. While I certainly didn’t think it was something the city could or would act on, I didn’t do it as a mere academic exercise. I did it as a way of envisioning a new role for Jersey City in the world. 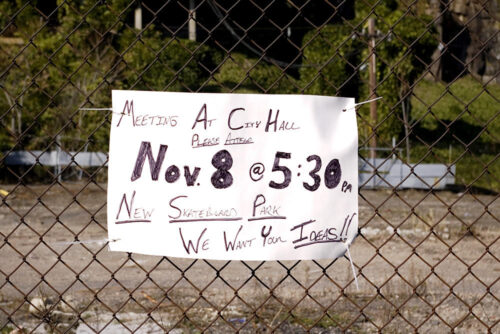 Meanwhile Fulop’s negotiations with the Turnpike Authority had fallen through. The skate park was dead. It was now early in 2008. A couple of years later I moved to Hoboken for a year and a half. Then I moved back to Jersey City in the summer of 2011. This time I moved into the Bergen-Lafayette neighborhood, one of the oldest neighborhoods in the city.

The skate park idea is rekindled

That’s when I discovered the DIY park that opened this piece. A bit later I discovered June Jones and the Morris Canal Community Development Corporation. In April 2012 Jones decided to start a community garden, where I volunteered for two years. At some point I learned she had played a major role in convincing the city to turn a local brownfield into a citywide park, Berry Lane Park. I suggested that they add a skate park to the plan. She was a bit skeptical, but took it under advisement.

At about the same time one of the people involved in the community garden, a local contractor named Musaddiq, introduced me to Greg Edgell, who curated graffiti in a 15,000 square foot loft a quarter of a mile down Pacific Avenue from the community garden. I showed him my report, “Jersey City: From a Skate 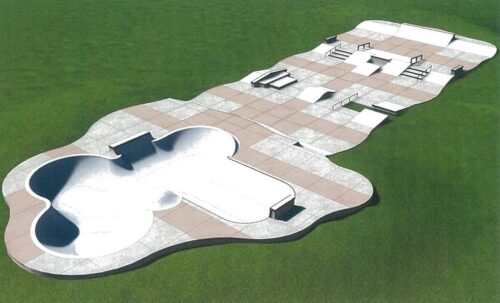 Park to the World,” which suggested that graffiti be made legal in certain areas of the city. He thought it was crazy but attractive. We decided to work together on various projects, including a few parties organized by Jones in the community garden and on a whole block of Pacific Avenue.

By this time she had decided that, yes, a skate park in Berry Lane would be a fine thing. She got our councilwoman, Diane Coleman, interested. We were all set.

In 2013 Councilman Steve Fulop was elected mayor over Jerramiah Healy. Fulop ran as a reform candidate while Healy ran with the Democratic establishment. In New Jersey, politics tends to be Democratic machine politics. very old school.

A year later, in April 2014, Site Design held a design charrette (or meeting) in the basement of the Fountain of Salvation Church on Communipaw Avenue, a few blocks from the site of the Berry Lane Park. I’d estimate that there were thirty people seated around a half dozen tables: skate boarders, neighborhood activists, and others. Each group was asked to design their ideal park. Site Design took those suggestions and came up with a design. 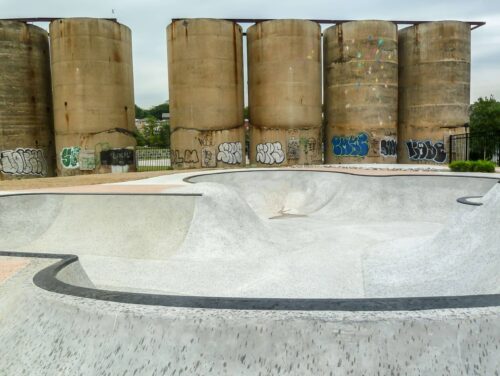 Early in 2015 the city – I don’t know who initiated and signed the application – applied to the Tony Hawk Foundation for a grant toward the construction of the skate park. Hawk is a legendary skate boarder; the purpose of his foundation is to fund underserved communities. And, with a population of over a quarter of a million and only one small skate park using portable wooden features (plus, of course, those “don’t look, don’t tell” DIY parks), Jersey City was certainly under served.

On March 4, 2015, the Tony Hawk Foundation announced that it had awarded Jersey City a $25,000 grant. Hooray for the good guys. But it was better than that, for the grant came with a time limit. If the city didn’t build the park by the deadline presented, it would lose the grant. And that would be embarrassing for the city.

Berry Lane Park is opened, then the skate park

On June 6, 2016, Berry Lane Park had its grand opening—without a skate park. The money had yet to be scrounged up. 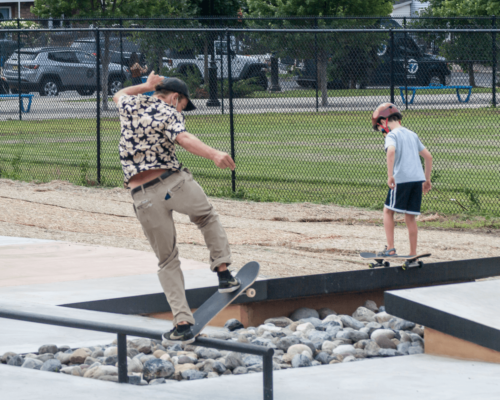 Some time later in 2016, I don’t know just when, there was another meeting, the “bake sale meeting” as Greg Edgell and I like to call it. Ben Delisle, director of development, and Heather Kumer, an environmental attorney, were there from the Jersey City Redevelopment Agency, Steve Leonardo and Mike Yanetta from the skate boarding community, along with me and Greg. The city had come within an inch, one little inch, of funding the construction of the park when, wham, some other project assumed priority, and the funding disappeared. Did we have any ideas? Well, none of us were millionaires, nor did we know any, so no, we don’t have any ideas. Surely you don’t think we’re going to fund this half-million dollar park with a thousand bake sales, do you?

That’s a bit unfair I suppose. It wasn’t their fault, the officials in the room. It certainly wasn’t our fault. Nor do I recall just what was said. I’m only giving a flavor. It wasn’t anyone’s fault. It never is.

But four years and who knows how many smoke-filled back-room meetings later, kismet came through. The city found the money. Tsivikos Construction broke ground in October 2019, started pouring concrete in March, 2020, and the park was opened on August 6, 2020. 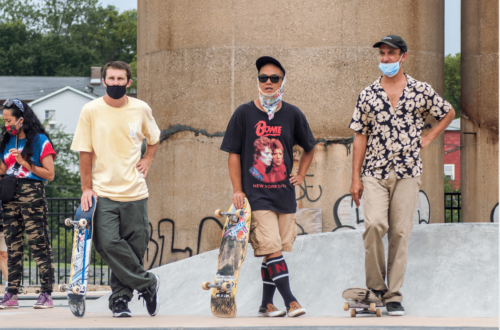 First Lesson: Stick with it and be flexible. But it happened. I don’t know what Councilman Fulop had in mind when he called the original meeting in November of 2007, but whatever it was, it didn’t happen. I know that when I came out of the second meeting I was excited about seeing local activism and democracy in action. What a good lesson for the kids, I thought. Whatever they took away from the experience, that lesson wasn’t it.

As for me, sure, I was disappointed. But the library had a record of that original DIY park. And I had that crazy-ass report, “Jersey City: From a Skate Park to the World.” That report gave me a stake in the city of a kind I hadn’t had before. That framed my subsequent experience in the city.

I took notes, kept a record, got people interested, and they did the rest.

Second Lesson: Trust and good will are necessary in the political process. This process revolved around three groups of people: the anarcho-libertarian skate boarders, the community activists and organizations, and regular old politicians. 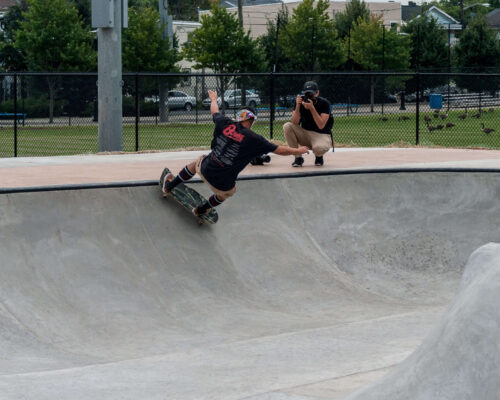 In the Bowl. Photo by Bill Benzon

Those are very different types. They have very different cultures. Skate board culture is fluid and can survive anywhere, but its capacity for scaling up is limited. You can’t pile water on water. It took a community organization to give the skate boarders a home and to build this desire and hope into something solid enough to attract the attention of professional politicians. And they, they came up with the money in their own sweet time.

At each step of the way people had to trust one another, even if things didn’t work out. It is because trust was there that will was able to find a way.

Bill Benzon blogs at New Savanna. A longer version of this article was published at 3 Quarks Daily.

Op-Ed: Yes, It’s Possible to Care Safely for Frail Seniors in Their Homes