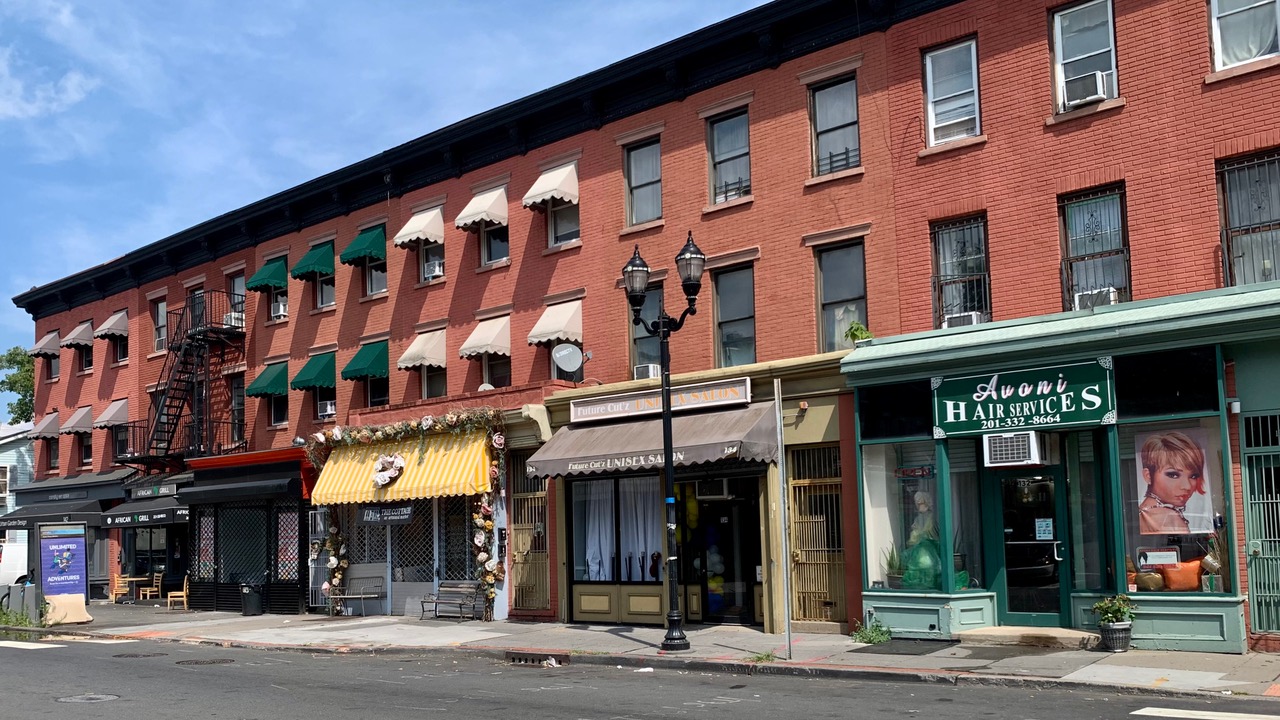 Heather Grabin recalls driving down Monticello Avenue on the way to dropping her daughter off at school. “I remember thinking this is the most adorable street.” Such was the street’s allure that at the height of the pandemic, Grabin opened a restaurant on the thoroughfare, called the Cottage.

Indeed, to an outsider, Monticello Avenue has all the makings of a street ready to take off: a hip café, a bike shop, a jazz club, and a funky store specializing in banana pudding. A number of tidy but still empty storefronts beg to be rented. 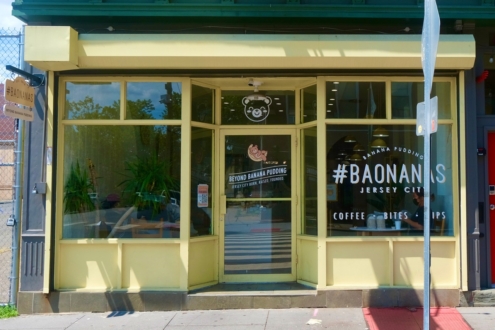 Several of the blocks would fit easily into an Edward Hopper painting. The elements are there: dark red nineteenth-century brick row houses, black streetlamps that look as if they might be lit by gas. Nearby sits the now-closed Trust Company of New Jersey, with its classic granite facade, an elegant building just waiting to be repurposed.

But like so many neighborhoods in transition, Monticello Avenue and the neighborhood to which it belongs — Bergen Hill (or Midtown to old-timers) — continue to struggle with the familiar problems of poverty and underinvestment that beset much of Jersey City’s south side.

Bergen Hill has also seen more than its fair share of violent crime. On August 7, a shooting on Monticello took the life of one man and left another critically injured. In January, a man was gunned down on Belmont Avenue in broad daylight as terrified residents looked on.

For Charley Cano, owner of Outlander Gallery at 126 Monticello Ave., the crime was too much. In April, he said that because of the danger, he was planning to relocate. 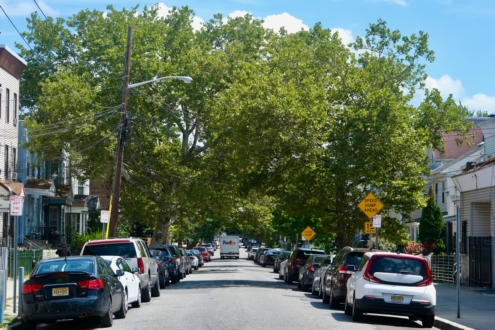 But Tamika Wilson, owner of Oh So Bougee Beauty Supply and Beauty Bar, is staying put. “I believe the neighborhood is safe for the most part. The people who have issues have issues with each other.”

Barak Stribling who runs his business designing costumes for Broadway shows from a Monticello Avenue storefront agreed. “When I think of crime, I think of a break-in, a mugging … okay a shooting is bad, but they knew the shooters.” In his 35 years in the neighborhood, Stribling, says he’s “never felt unsafe.”

Like so much of Jersey City, the area has gone through a cycle of relative affluence, decay, and renewal.

Ruth Moore, the owner of Moore’s Lounge, has lived in the neighborhood 53 years. She remembers that there were taverns up and down the street with names like Sal’s and The Robin’s Nest. “Everyone was able to make a living.”

Today, Moore’s is the only bar on the street. The taverns have been replaced by storefront churches with names like Continuous Flow Christian Center, Miracle Temple Church and Jerusalem Temple.

But the street is, apparently, bouncing back from the urban flight Moore describes. “Monticello’s come a long way from what it used to look like,” said Michele Massey, executive director of the Jackson Hill Special Improvement District, which encompasses Bergen Hill. She attributes much of the turnaround to a project under former Mayor Glenn Cunningham that renovated storefronts between Brinkerhoff Street and Astor Place.

As he works on a bike in the back of his shop, Bike Hub, “Buzz” Pasdar says, “In my fifteen years here, the street has improved tremendously.”

But Pasdar, who also owns the hip Snapdragon Coffee & Social directly across the street, expresses a sentiment shared by others on the street. “I worry about the effect of gentrification on the people who have always lived here.” 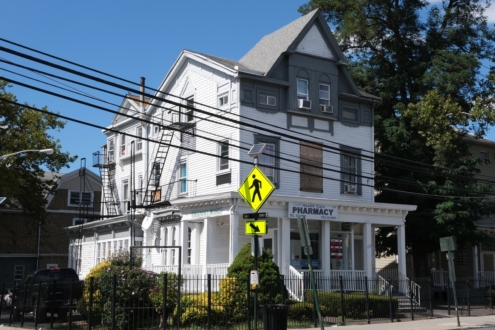 Yet for all the progress, recent arrivals to the neighborhood worry too. Patrick Toussaint and his wife, Andrea Ducas, moved to Bergen Hill three years ago. “You can see the divestment,” says Toussaint. “There is so much blight and so many vacant storefronts on Monticello. The city doesn’t crack down on absent landlords or crappy developers who intentionally take the vacancies as a loss.”

As is the case in many Jersey City neighborhoods, green space is at a premium. “There are very few places to put a park” says Massey. “There is one pocket park. I’ve been speaking with the city about getting that rehabbed.”

“The city’s got to put some skin in the game in order to be more creative with places and spaces,” say Massey.

She recalls the many summer and after-school activities for kids that were available when she was growing up in Jersey City “We used to go to a summer camp at the teacher’s college that is now NJCU. Then we had the YMCA, the YWCA, the Jewish Community Center. All the places that we could go to as kids are gone.”

Graber echoed Massey’s concern. “There’s no playground, there’s no splashpad … there’s nothing for children. They have no resources. What do these parents do? You can go down to Berry Lane, but it’s a schlepp.”

Schools are another issue. One parent who asked to remain anonymous, said ruefully that most of the newcomers with young kids leave. “Your baby is about to start school, and you move to Montclair.”

For many, however, moving to an upscale suburb isn’t an option. There are three public schools in the area, P.S. 12 (Pre-K–5), P.S. 17 (Pre-K–8) and Lincoln High School. Chris Gadsden, the principal of Lincoln High School has seen the neighborhood changing. Just ten years ago he notes that his school was 90 percent Black but said that now he’s seeing a marked increase in the number of Hispanic, Asian, and white students. 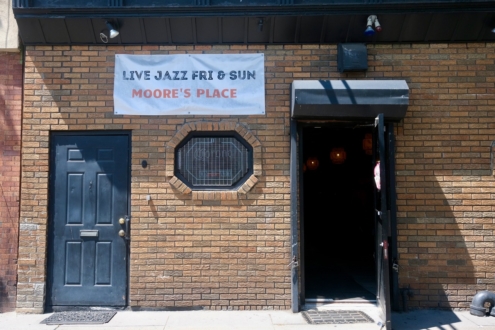 Developers clearly see the neighborhood’s potential. In 2021, the upscale “Monticello Triangle” project containing 304 residential units, parking, retail space, and a public plaza was approved. A 22-unit mixed use project is slated for 43-45 Monticello is also on the boards. Both lots, however, remain undeveloped.

The new projects may not come soon enough though. Graber says that low foot traffic is a problem, with many of her customers coming from out of the area.

The neighborhood remains a good relative value. A brick row house on Astor Place with a snazzy modern interior is currently listed for 879,000. And according to Realtor.com, the median price for a home in the neighborhood is $424 per square foot, a steep discount from downtown.

If the area still presents challenges, those who live and work in Bergen Hill swear by it. Says Graber, “Our neighbors are amazing, the other business owners are amazing.”

Ditto for Massey. “I live off Monticello … I like it a lot … it’s just one big neighborhood … everyone knows each other. There are some guys hanging out on the street, and they’re like, ‘How ya’ doin’?’ They remember you. I never feel uncomfortable.”