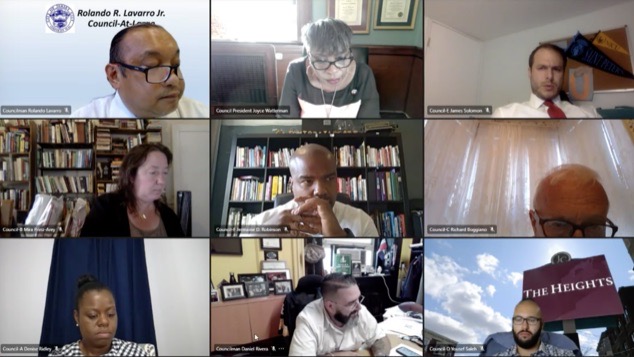 During an eight-hour period last Wednesday, Sept. 1, Tropical Storm Ida dumped 24 inches water on the Jersey City area. Said Jose “Joe” Cunha, executive director of the MUA, of Ida, “I believe it was … along the lines of a 500-year storm.”

According to Cunha the deluge caused a “washout” of soil covering a steel aqueduct in the Cedar Grove area. “A tree fell over as part of the washout, which pulled up a boulder and consequently rolled on top of and cracked a section of the aqueduct allowing surface water with mud and dirt to enter our finished water for an unspecified amount of time.”

This triggered the “boil water” advisory. Suez North America CEO Nadine Leslie explained how Suez’s technology went to work. “When our water quality sensors picked up changes in turbidity and chlorination in the city of Jersey City water system and the area, we promptly dispatched our staff to investigate and take action to resolve the issue.”

Ward D Councilman Yousef Saleh questioned why Suez does not distribute potable water in such emergencies. “With the increase of weather events that are happening, in the event that the water is compromised, shouldn’t you have a contingency plan for supplying water to those [impacted] municipalities?” he asked.

Leslie told the council that, while Suez is looking into increasing its capacity, it is required to distribute emergency water only when there is a cut off to water service such as in a water main break. Nevertheless, Suez did provide fresh water in response to a request from the city, according to Leslie.

Council members were also critical of a of series of miscommunications and delays in the company’s Ida response.

“I was out there all day, and distribution did not start picking up until 11:30. If water was difficult to get, then how did Hoboken receive it earlier than we did?” asked Watterman. “We told residents 9:00. People were out there and frustrated and angry.  They thought we had something to do with it, which was out of our control. Some of the council people purchased water themselves.”

Ward B Councilwoman Mira Prinz-Arey questioned Suez’s logistics, staffing, and communications. “Not only did things arrive late, but there was only one person when they came to Lincoln Park. … If I had not been there, and if the representative from United Way had not been there, it would have taken twice as long for them to offload.  It was already 10:30 by this time, and residents were lined up expecting bottles of water because that was what was communicated out to them.”

Ward E Councilman James Solomon noted that for some, the boil water advisory was combined with the loss of electricity, leading to a loss of boilers and a greater need for water. “Given the size of this city with 300,000 residents, the six stations were simply not enough.

Yet Solomon said there was plenty of blame to go around. “This is partly on the city’s OEM [Office of Emergency Management], too, for a plan for the city’s vulnerable populations where lugging jars of water a mile is not doable,” he noted.

Councilman-at-large Rolando Lavarro said that getting information to some of Jersey City senior buildings was difficult, and expecting seniors to carry large containers of water from a tanker back home was unreasonable.

Adding to the confusion was the length of time it took to announce that the water was once again potable. Suez representative Jason O’Brien stated that even though the first round of sampling came back negative, the New Jersey Department of Environmental Protection asked them to do another round of sampling and testing, which takes 24 hours to complete.

This was not the first time Suez has faced criticism for poor communication during a water emergency. In August, high levels of E. coli bacteria were detected near Christ Hospital, but the boil water advisory took hours to be established. Solomon recommended Suez improve its emergency alert system.

“You learn from experience,” he said. “I think you guys did a great job. I was on the phone with you 20 times, 30 times … and hopefully this will never happen again. … Nobody expected what happened. We can’t come along and criticize everybody.”

The next regular meeting of the Municipal Council is scheduled virtually for Thursday, Sept. 9, 2021, at 6:00 p.m. Join the meeting here. To learn more, go to JerseyCity NJ.gov.