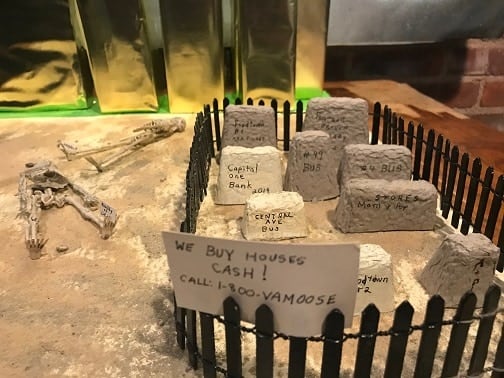 In an art show that Project Greenville put on this past fall, artist Pat Olsen, a lifelong Jersey City resident (and full disclosure, an acquaintance of this writer), displayed a striking diorama symbolizing the quality of life in south Greenville.

The theme of the group’s fall show was “Neighborhood Portraits: A Collection of Familiar Faces and Places.” At the writer’s request, Olsen brought her diorama back out for the last day of Project Greenville’s “Winter Wonderland” show on Dec. 7.

Olsen’s diorama is divided in half. On one side is a graveyard in which skeletons lie beside tombstones marking services and businesses. Tucked into the cemetery is a sign that says, “WE BUY HOUSES/Cash! CALL: 1800-VAMOOSE.” The scene is enclosed by a picket fence that is ablaze. A buzzard on a sickly tree overlooks it all. 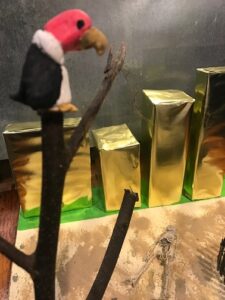 “The buzzard up there is the real estate developers,” Olsen explains. “And the skeletons, they died from neglect and the quality (of life). The cemetery is full of all the things we’ve lost, like the buses, the supermarket. We’re in a desert, and the flames are … the neighborhood is burning.”

The surface of the other half of the diorama is green. On it sits tall gold-colored blocks that represent the city’s “gold coast.”

“It’s a tale of two cities,” Olsen said about the project. “It’s all the things we’ve lost in Greenville, and it’s the neglect and the quality of life issues and how the signs are on every block. ‘We’ll buy your house for cash. Get out.’”

It’s just a feeling that we have that we’re not wanted in our own neighborhood. And if the city has four million dollars to put [pavers] on Newark Avenue to raise the street, how come we can’t have a library, or how come the parks weren’t fixed?”

Last year Jersey City established a “quality-of-life task force” that handles code enforcement of “problematic properties and businesses that frequently violate quality of life,” according to the city’s website. This rotted streetscape is exactly the moribund life that Olsen’s piece depicts. Problematic properties, in the artist’s view, are simply par for the course.

One thing Olsen is particularly irked by is the lack of reliable public transportation to and from the many senior housing residences along Ocean Avenue.

“So, you have all the senior citizens, and you don’t have a bus line for them. And they want you to use your app to get a ride to come to you. How many old people can use a cell phone and an app and get a car ride? It’s not going to happen. And those are the mobile ones.”

Olsen did express hope about the purple vans slated to begin their rollout next month, public vehicles that for a subsidized price will shuttle residents in Greenville and the Heights to other locations in those neighborhoods and to and from the transit hubs and business districts in Journal Square and Downtown. To Olsen’s satisfaction, users will be able to summon the vans via a good old-fashioned phone call (among other ways).

Olsen also expressed hope about the $200,000 the city pledged for upgrades to Martyniak-Enright Memorial Park at Pamrapo Ave. and Old Bergen Road due to begin in the spring.

“My earliest memories of the park in the 1950s were cutting through it, drinking from the water fountain, and seeing boys playing ball,” Olsen said. “I think I remember swings there.”

The artist believes the park is important for two reasons: to get people out of the house and to spur interaction amongst a cross section of people. She plans to attend every meeting related to the park’s improvement.