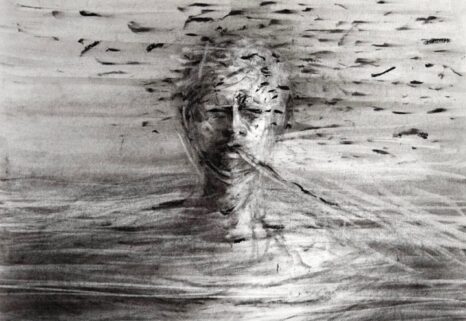 Winifred McNeill is an absolute local. She lives in Jersey City, teaches at NJCU, and she’s exhibited at Drawing Rooms, Victory Hall, and in the Windows on Columbus. Much of her prior work falls firmly within the Jersey post-industrial style: She’s fashioned plumbing pipes into tiny viewing chambers for her nude sketches, for instance, and she’s drawn to the smudged, illegible, overwritten quality of discarded books. Like many of the marsh creatures who populate these Garden State swamps, she’s fascinated by birds and seashells. Her color palette runs toward ghostly off-whites, factory-soot greys, and chemical blues. This is a Jersey person, in other words.

Yet her new exhibition stretches across the ocean. “The Air and the Space,” a short-run show that wraps up at the Art House Productions Gallery this weekend, plays gently but trenchantly with European signifiers and centuries-old traditions. McNeill, balanced as always, does this without giving up any of the characteristic qualities that root her in the arts movements of Hudson County. The pieces in “The Air and the Space” were created during a residency at the European Ceramic Work Center in the Netherlands, and that influence shows. A series of rectangular, tile-like sculptures, iced like pound cakes with Limoges porcelain, bear their images in Delft blue. Figures in an array of charcoal drawings have a tragic, mythological quality to them. The show is dominated by a series of small ceramic busts, mostly of bald-headed men, some colored gold, some slightly stained, all beautifully expressive, all evincing assumed nobility. They look as if they could have been unearthed from Pompeii.

McNeill and the Art House place these small busts — most of which could fit easily in the palm of a hand — on tall, taper-candle-thin pedestals, and arrange them in clusters at the center of the gallery. The result feels like a forum, and it renders the viewer a spectator and an eavesdropper, and maybe even an interloper, too.  If some of McNeill’s characters seem more interested in projecting stoicism and a defiant upturned chin than they are in conversing with their fellows, well, that may strike you as an honest assessment of transhistorical political discourse. It is, perhaps, for the best that Art House is limiting access to the show to a few viewers at a time because an errant swipe of an autumn coat could send all of these busts and their pedestals crashing to the ground like Jenga sticks. A slightly larger sculpture in the window looks as if it has something to say — but it is missing most of its face, and its head is hollow. Do these proud little patricians know how fragile they are? Do any of us?

The Ceramic Work Center residency ended just as the pandemic was gathering strength, (McNeill, the Art House tells me, was on one of the last planes back to the United States), and the shadow of the global health crisis does hang over “The Air and the Space.” But this small but eloquent exhibition speaks of older anxieties, too: impermanence, transience, the difficulties of communication, the prevalence and folly of hero worship, and the curious silence in the public square. These are, alas, threats that cannot be vaccinated against.

The Air and the Space

Only eight visitors are allowed in the gallery at once. Masks are required. Email gallery@arthouseroductions.org to schedule a visit. 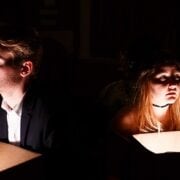 Mayor Fulop and other officials gathered next to the Hackensack Riverfront yesterday to announce the creation of Skyway Park where more than 500 trees will be planted — one for every Jersey City resident who has died of the coronavirus.

Mayor Steven Fulop announced that the city is moving forward with the termination of a tax abatement for 4 of the 6 buildings within The Beacon Community, located at 20 Beacon Way, after the developer, Baldwin Asset Associates Urban Renewal Company defaulted on its 2005 financial agreement with the City of Jersey City.

Governor Phil Murphy has “re-tightened” the limit on outdoor gatherings to a maximum of 25 people, effective 6:00 a.m. on December 7th. Religious and political activities, funerals, memorial services and wedding ceremonies are exempt.  Outdoor dining is unaffected.

Mayor Steven Fulop has announced Elizabeth Castillo as the new Acting Director of the Department of Finance, established by the Mayor earlier this year to further develop fiscal policies and procedures. The new Acting Director will fill the position left vacant by the Department’s first-ever Director, John Metro, who was recently appointed the role of Acting Business Administrator by the Mayor.

Governor Phil Murphy has signed an executive order retightening restrictions on gatherings to help stop the spread of COVID–19. Effective Tuesday: Indoor gatherings are limited to a MAXIMUM of 10 people

New Jersey is 3rd Best State for Teachers According to Study

Op Ed: Fulfilling a Dream for Liberty State Park
Subscribe to Our Newsletter