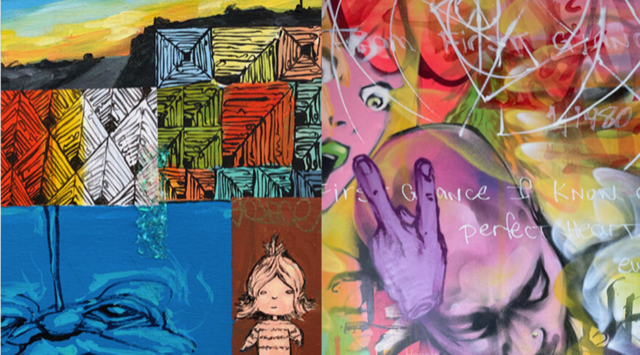 There’s nothing unusual about two rappers collaborating on a track, or a tour, or an entire album. Joint visual arts projects are rarer. Yet there’s no reason why painters shouldn’t share canvases, or hang their work on the same walls, or approach audiences shoulder to shoulder, just like a pair of emcees would.  That Clarence Rich and Mr. Mustart grew up on hip-hop is apparent from the work they do. They understand the benefits of joining forces. 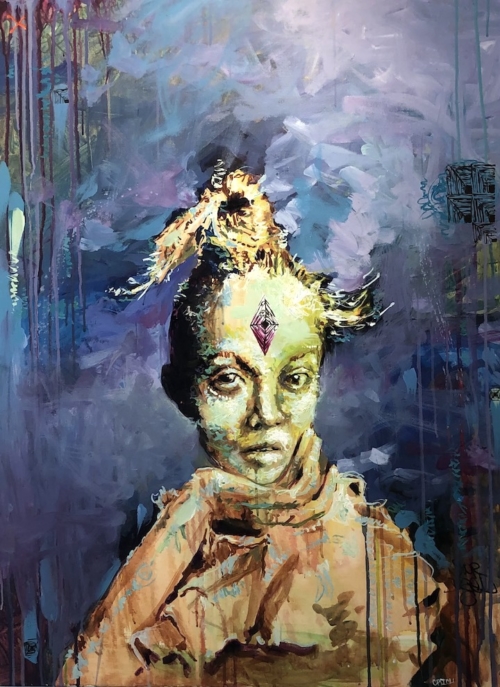 If “Polarity,” their joint show, presents these two Hudson County painters as rappers passing the microphone back and forth, Maria Kosdan, the curator of the space where the exhibition is hung, is the deejay. Kosdan runs the art space at PRIME (351 Palisade Ave.), a smart, ground-floor real estate office that doubles as a gallery, and during her time there, she’s been pitching color at her visitors by the bucketful. Rich and Mustart are exactly her style: they make pieces that jump off the walls.

Their use of bright pigments, aerosol-like effects (likely generated by actual aerosol paint), their love of popular culture, juxtapositions and collisions, dream-figures, and aggressive lines suggestive of motion align them both with the outdoor art aesthetic that has gained so much traction in Jersey City over the last decade and a half. Their portraiture is gonzo, and that includes a portrait of Gonzo (the muppet). Kosdan hangs their paintings side by side, and, on the south wall of PRIME, staggered in an upward-sloping rush. They come at the gallery-goer in a flurry of lines and facial expressions and, often, words, too.

Shrewdly, the show makes no attempt to differentiate between its two exhibitors.  Unless you’re intimately familiar with the elements of artists’ styles — Mustart’s psychedelic graffiti-swirl backgrounds, Rich’s tunnels of squares rendered in quaking black lines — it might take you a moment or two to figure out whose pieces are whose.  This is particularly true on the canvases credited to Rich and Mustart together. On these, the visions are so seamlessly joined that it’s never clear who the originator is, and who is the remixer. The result is an uncommonly coherent show: one in which all the participants, including the curator, speak in a single boisterous voice.

In its gallery presentation of street art and guerrilla art signifiers, “Polarity” is reminiscent of Distort’s “Reaching for the Steal,” which was shown at Deep Space Gallery in Autumn 2020. Distort, Mustart and Rich are clearly simpatico; they’ve collaborated on murals, and they’ve developed compatible techniques.   Distort’s work is resonant with echoes — his subway stations resemble Renaissance cathedrals, and his scenes of casual political violence carry with them a kind of medieval brutality. Mustart and Rich are students of art history, too. But they’re inspired by album covers, toys and cartoons, magazine covers and posters, the digital detritus of the consumer age. Many of the works in the show are named after pop songs: “Embryonic Journey,” “All of the Lights,” “Old Man Look at My Life.” 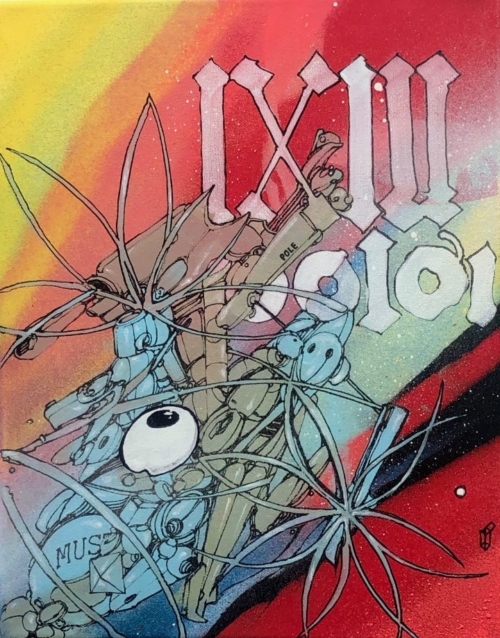 If that sounds playful, it is — to a certain extent. The pieces in “Polarity” are not heavy with the same trans-historical gloom that characterizes Distort’s paintings. They achieve their own gravity, however, through sheer kinetic energy and a clear-eyed view of the real peril of the present moment. Collages of clippings from newspapers rarely work, but Mr. Mustart and Clarence Rich invest their joint canvas “Forbidden Fruit” with so much urgency and distress that any reservations are blasted away by the peculiar heat that the work radiates. Mustart fashions representations of odd compound structures with hard, jagged surfaces; the one in “Polarity”, which may or may not contain a human eye, resembles a cross between a hand-blender and a mangled motorbike. “Fight the Power” evokes a weathered wall on a city street, tortured by the elements and years of wheat paste, graffiti faded and overwritten, suggesting a struggle that has been going on for a long time.

Clarence Rich, too, is never far from the bricks. His corridors of concentric squares and triangles -— a hallmark of his work — do suggest the cavernous windows, air shafts, and fire escapes of tenements, and they seem calibrated to make an intervention in a streetscape, and an impression on a passerby.  Yet it’s as a portraitist that Rich truly distinguishes himself.  Some of his figures are cartoonish and blocky, square-jawed, monstrous, resolutely urban, but kinda cute, too. His “Crew” consists of ruffians, and if their blunted heads, orange faces and turkey-baster noses render them fantastic, their attitude feels wholly realistic.

Then there are the paintings of people done in a far more naturalistic style, even if the tones that Rich favors are redolent of spray-paint rather than sitting rooms. These capture specific emotional moments — the mix of astonishment and challenge on the orange and blue face of the woman in “Amazed,” the exhaustion of the baby in “Solace Sky,” the wary, knowing look on the slightly alien figure in “3rd Eye,” the show’s most remarkable canvas. These feel like snapshots from a larger reel, stills from a dramatic film playing in the painter’s mind.

Like all good storytellers, Rich and Mustart aren’t eager to provide all the details. They’re going to leave plenty up to the imaginations of their viewers. Kosdan, too, resists the temptation to fill in the blanks. Instead, she lets the two artists engage in a dialogue — one so seamless that it often feels more they’re singing in harmony. These guys know each other, they’ve worked together, and it’s fair to say they’ve got similar concerns. “Polarity” proves that, if the conditions are right, two strong artistic voices can amplify each other. The show is a demonstration of artistic skill, sure. But it’s also a testament to friendship, mutual understanding, and mutual respect. There’s something awfully aesthetically pleasing about encountering that.

“Polarity” will be at the PRIME Gallery until April 13. Visit www.primegallery.art.

Schools to be Well Funded but Taxes are Going Up