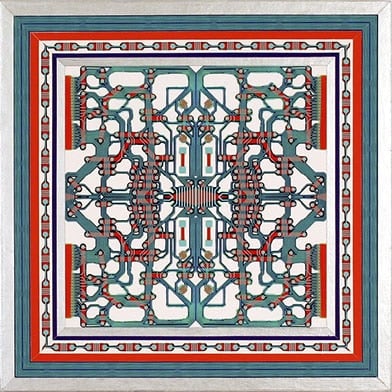 If you’ve ever had a computer spill its guts to you, you know what a shattering experience it can be. The surfaces of video cards and chipboards are great riddles in titanium, wire, and plastic. Dots and twisting parallel lines, bright colors and silent black rectangles: It’s all in there, hidden behind the screen you may be looking at right now. Run electricity through it, and the magic begins. But unless you’re an engineer, there’s very little chance that you understand the meanings of the markings on the chips and drives. They’re as inscrutable — and as beautiful — as hieroglyphics or cuneiform characters carved into rocks.

Many visual artists have been struck by the accidental aesthetic of electronic components. Few, however, have taken that interest quite as far as Pat Lay. Visiting “Exquisite Logic,” her show at the Dvora Pop-up Gallery in the Powerhouse Arts District, is a bit like stepping into a mainframe. Lay takes byzantine images of circuit boards, manipulates and enhances them, and goes large with them — sometimes as large as a tapestry or a Persian rug. Even the materials she uses to make her prints and collages have technical-sounding names: MDF cradled paper, Tyvek backing, metallic ink. Instead of handles, she’s assigned serial-codes to them: “B53K477-1,” “B54AAA0468B,” etc. To a non-artist, it’s all as arcane as a liturgy in Latin. 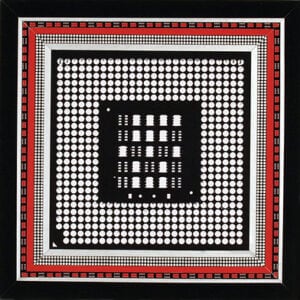 From these elements, Lay has conjured something subtly familiar and maybe even deeply human. Lay calls many of these images “digital mandalas,” and many of them do display the symmetry and the near-tessellated quality associated with traditional Indian art. Modern mandalas are often used as relaxation tools, but for centuries they were associated with devotional practice. Here, the Buddha is gone missing, replaced by a microchip.

“Exquisite Logic” is not a simple statement about the loss of spiritual intensity amidst the rise of the machines. Pat Lay has far too much respect for computers for anything as vulgar as that. Rather, her work whispers about the way in which Techne always seems to draw on the symbolic language of religion. By tracing connections between motherboards and sacred painting, Silicon Valley and sadhana, Lay’s art brings the computer and the temple into alignment. Both are sites of magic and wonder. Both are favored by visionaries, enlightenment-seekers, and thrill-riders.

In order to achieve this effect, Lay goes heavy on eye-popping techniques: bright color on dark backgrounds, gradients, parallel lines and sharp geometric figures sheer scale. The opening images in “Exquisite Logic” are nearly eight feet tall, and they’ve been hung high on the wall; unframed, they curl a little at the sides as they scroll toward the gallery floor. The bigger images are rendered on Japanese kōzo paper, which imparts some of the airiness associated with Asian landscape art.

Some of these resemble obsessively decorated doors. Others are distinguished by a spine, running from the top to the bottom of the images. The verticality of these pieces suggests ascension; their texture and design keep them earthbound, tethered to artistic traditions. The pattern on “KB095-2” looks more than a little like those on a Navajo blanket. “CDS118 164020” sports stark turquoise fields reminiscent of batik. “B53K4771” comes on like the cover of a sci-fi paperback – something by Philip Dick, perhaps, about a portal into a digital world. 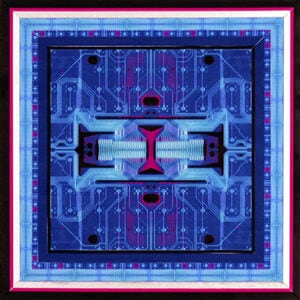 The mandalas are smaller and quieter, but taken collectively, they’re no less immersive. These crisp, chilly squares feel like an encounter with an alien (perhaps artificial?) intelligence. It’s here where Pat Lay’s inspirations are clearest: The series of images called “Processor #1-6” are images taken straight from the bowels of a computer, balanced in the center of a grid and framed, a chessboard where Deep Blue always has home-field advantage. “DM610161212,” perhaps the most arresting of the mandalas, is a thick network of wires and chips straight from the circuit board. With the conduits in electric blue and the breakers in bright crimson, it could be a trippy still from a space opera: a view of a starship corridor seen through the infrared lenses of a Robocop.

Yet calling these images kaleidoscopic — evocative of sci-fi and the psychedelic symmetry of outer space flicks — doesn’t do them justice. The DMT daydreams of pieces like “DM423161212” are exciting, but they play a supplemental role; the callbacks to ancient Indian, Celtic, and Native American devotional art take the lead. It requires an artist of peculiar sensitivity to crack open a computer and find mandalas, crosses, and circles reminiscent of Himalayan sand paintings there. Lay may be on to something, even if it’s just our tendency to project our own technological aesthetic back on to artworks made by prior searchers for ultimate truth.

Although the tone is totally different, “Exquisite Logic” reminded me of the Zheng Guogu’s outstanding “Visionary Transformations” exhibition at MOMA PS1 last spring. Like Guogu, Lay is well aware of modern distortions that make apprehension of Buddhist art difficult. Like Guogo, she embraces those distortions and from them she spins some … well, we won’t say gold. Bitcoin would be more appropriate.

“Exquisite Logic” will be on view through March 12, and there’ll be a special event at the gallery for Jersey City Fridays. If you didn’t know that Dvora even existed, you’re not alone — until recently, I didn’t either. The space, which is raw but perfectly appropriate to an exhibition like this one, is right behind the big plate glass windows of an unused chamber on the first floor of the Oakman Condominium building (160 First St.). This is the premiere exhibition in the gallery, and it’s an impressive way to kick off. Presently, Dvora is programmed by the sharp-eyed people behind the Drawing Rooms gallery in the Marion neighborhood of Jersey City. When the Powerhouse Arts District was initially conceived, it was spaces like this one that arts advocates were imagining. We could use a few more like this one.