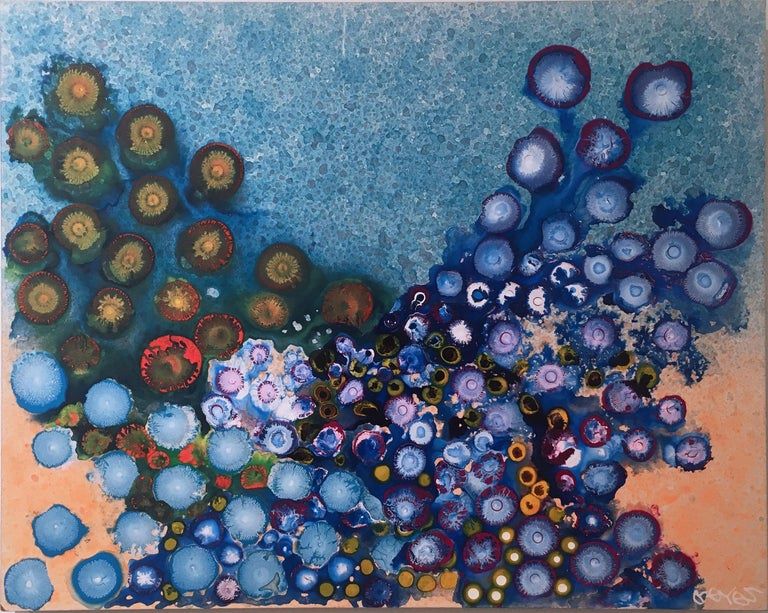 Deep Space is an appropriate name for a gallery that focuses on new and unusual art. It’s all unexplored territory out there between the stars. Anything a space cadet might encounter in those vast reaches is bound to be strange and novel and worthy of scrutiny. There are other kinds of deepness too — intellectual depth, emotional depth, conceptual complexity and depth of vision — and Deep Space curators seem intent on creating an environment in which these kinds of creative activities can flourish. There’s also the way in which the name of the gallery describes its position on the map of Jersey City. Deep Space is technically located in the Bergen-Lafayette neighborhood, but it’s on the fringe of an industrial zone that has, so far, barely been touched by the great wave of redevelopment that has swept through this town. Their home is deep JC — a part of the city that isn’t included in the destination marketing.

Perhaps it should be. None of our cultural institutions are showing work any fresher or more vital than the paintings and sculptures that have recently been exhibited at Deep Space. If visual art is what Jersey City does best (and it is), Deep Space Gallery is right at the heart of local culture. Its owners have shown a pleasing commitment to affordability, encouraging those who aren’t collectors to dive in and buy a piece. Some excellent small canvases at the gallery’s recent “Gigantic Miniatures” show were priced as low as thirty to forty dollars.

Gallery owners Jenna Geiger and Keith Van Pelt have brought back two of the painters from “Gigantic Miniatures” for “Circle the Square”: Orlando Reyes, who’ll be immediately familiar to longtime followers of Jersey City art, and Debra Lynn Manville, who might not be. Reyes was the founder of 58 Gallery, a Downtown space with an offbeat aesthetic and a communitarian spirit that Deep Space shares. Manville runs a virtual gallery project called “1Million Diamonds” (1milliondiamonds.org) that champions abstract geometric work. They’re both participants in the local art scene, which is not uncommon for painters who exhibit at Deep Space.

Reyes and Manville are two sides of the square. The other participants in this well-balanced show are Kati Vilim, whose flat, interlocking fields of color align her work with Manville’s, and George Goodridge, whose twisting, pulling, and warping of canvas makes him as much a sculptor as a painter. Taken collectively, these four artists share an attraction to bold hues, striking shapes, and offbeat rhythms. But what really unites them is their tone. This work is cheerful but not overly so, playful and experimental but not ostentatiously so, gentle but never toothless. Like so much of “Gigantic Miniatures” — and so much of the best Jersey City art — these paintings are weird but welcoming. 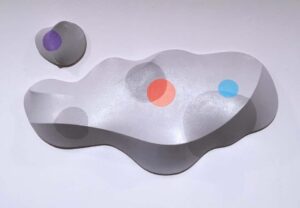 “To Dream Of Paradise” by George Goodridge

The weirdest and the friendliest of the quartet is Goodridge, who dabs ameboid ellipses and perfect circles on canvases that have been stretched tight as a Navy bedsheet over balsa wood frames. The frames aren’t visible, but their effect certainly is: this isn’t unlike painting on a cloud or a partially melted marshmallow. Most artists’ focuses get sharper as their works shrinks in size; Goodridge is just the opposite. His vision is best realized in his larger pieces, which are so relentlessly pleasant that their scale never overwhelms the viewer. “The Complexity of Joy,” a sixty-nine-inch tall acrylic painting on a curved canvas, hangs over the show like a thought bubble stuffed with pleasant ideations. “To Dream of Paradise,” a smaller canvas, is a cooler cumulonimbus. It possesses the hovering quality common to Goodridge’s work. It drifts over the viewer, but it never imposes. 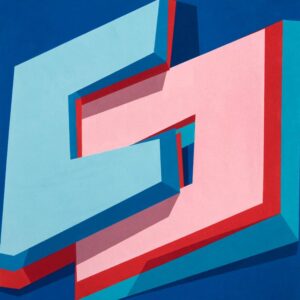 Vilim’s paintings, too, feel like unanswered questions. There’s a surprising amount of action happening in these abstract, static panels. Her shapes often float on soft gray backgrounds: They’re curves that cling and repel each other like horseshoe magnets, dark Ls and cubes that lock together to form rectangular prisms, mysterious raven-black cutouts given dimension and a sense of heft by blue accents. Sometimes she makes her shapes leap off of the panels and jostle for position: In “Common Space,” a great blue hook appears to rise and slip atop a pink one. There’s a similar sense of crowding and vague unease in “Summer Blue Influence”: three large figures, tentatively touching, tucked into a tight frame. The most placid of these subtly turbulent panels is a single U composed of pastel-tinted color fields of plaster. It’s called “Something Like Happiness” — not all the way to contentment but an acceptable facsimile thereof. 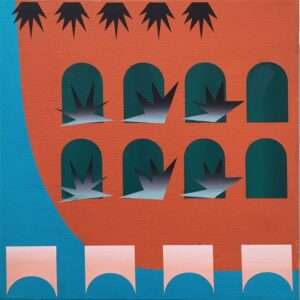 The sharp lines and crisp angles of Vilim’s paintings approach geometric abstraction. Debra Lynn Manville’s work goes all the way and even flirts a bit with the airlessness of corporate logo design. Fans of this style will recognize an enthusiastic practitioner with a steady hand for parallel lines, a good eye for gradients, and commitment to knockout colors. “Tysimmon,” which is painted on a wood panel, achieves a near-metallic shine, like the fender of an automobile under streetlights. “Usilia,” too, generates the illusion of curved space. Too rigorous and too precise to be called psychedelic, Manville’s work does lean toward the surreal: “Havens,” a leftover from the Miniatures show, is strangely suggestive of the plant-stuffed windows of a beachfront hotel.

Manville uses Flashe paint to produce a vinyl-like matte sheen. Reyes is after some attention-grabbing effects, too, and he finds them at the intersection of pigment and metal. By applying color to aluminum surfaces, he gets paint blots to open like flowers or corals. Tiny rivulets of color score these radiant circles of his. He achieves similar results on other surfaces, but the aluminum plates sing loudest. If you’re familiar with the artist, you’ll also be familiar with the effects, too, but even if you’ve seen them before, they retain their ability to startle. Walking past a wall of his paintings is a bit like a trip through a tulip garden: colors and contrasts, pinks and reds in bunches, bouquets generously bestowed, an overwhelming sense of plenty.

Technically, all of these painters are experimenting. They’re pushing at the boundaries of their styles, exploring the power of shape and color, taking chances, doing the sorts of things that an artist does when he or she is subject to the interstellar currents of deep space. Yet there’s so little sweat visible in “Circle the Square” that you may not even notice. All they ask of you is the same thing that all deep space cadets do: Have a little faith, detach from the mothership, and float.

Death of a Venue: What Does the Future Hold for Live Music in Jersey City?

Five Takeaways from the 14C Art Show
Scroll to top