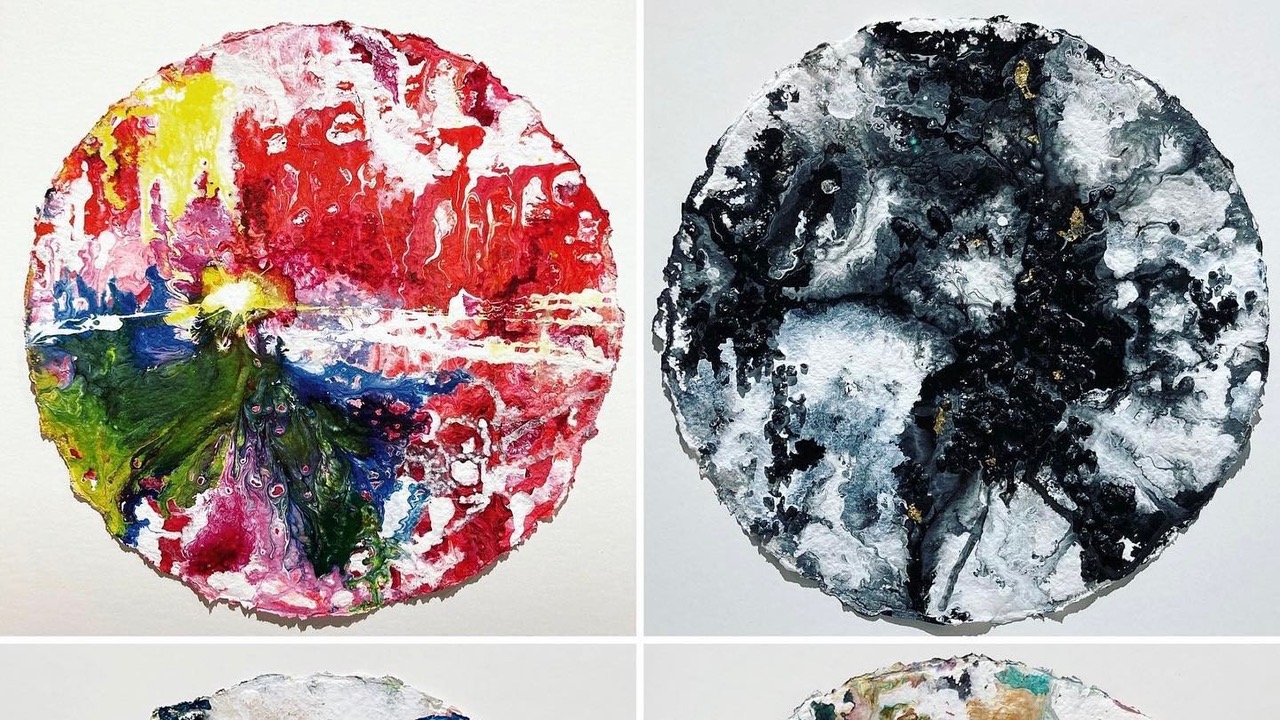 For an arts business operated by a single proprietor, the Novado Gallery (110 Morgan St.) is pretty spacious. Three or four SMUSHes or Outlanders could fit between its walls. The shows mounted there aren’t necessarily larger than those at the other art galleries in Jersey City, but they often breathe better. Anne Novado has room — space to isolate works that are better apprehended by viewers if they aren’t hemmed in, and space to position the overhead lights at angles that enhance the effect of the work on view. Some of our other art galleries don’t have dedicated overhead lights at all (something for the Arts and Culture Trust Fund to work on, perhaps?)

There’s little doubt that Novado, whose sense of presentation is as sharp as that of anybody in Jersey City, would mount fine exhibitions in smaller spaces. But airiness complements her aesthetic. More than any gallery-runner in town, she’s got a specific tone she likes — one that emphasizes balance, beauty, careful use of color, occasional whimsy, conceptual daring, and evident marks of high intelligence. Artists who present at Novado Gallery tend to do a lot of thinking before they swing those brushes around. Also, the mischievous streak that runs through her shows has only been amplified since the pandemic: in the past eighteen months, Novado Gallery has brought us the toy-like 3D-printed sculptures of Dan Fenelon, Denis Ouch’s winking conflation of Western pop stardom and military dictatorship, and Paul Leibow’s audacious (and salacious) deconstruction of Felix the Cat.

Now comes the skeleton key to the whole enterprise: “Non-Linear,” a presentation of fifteen new pieces by Anne Novado herself. The show, which is up until January 22, is a particular treat for those of us who’ve seen Novado’s excellent paintings tucked away, modestly, on back walls of the gallery, and wished we could be immersed in her vision. The works in “Non-Linear” embody many of the virtues we’ve come to associate with Novado’s gallery, and Novado’s taste: melody and rhythm, chromatic richness, lightness of spirit, gentle winking and nudging. But they were also created during the pandemic, and abstract as they are, that trauma is observable. The grace and radiance that are part of her visual signature are here in spades, but everything is set in pinwheel-motion by a chill breeze of isolation that blows through the whole show. “Non-Linear” helps us understand everything else mounted at Novado Gallery because it makes Anne Novado’s aesthetic values plain. But it also helps us understand the current state of Anne Novado’s psyche, which is looser and more untethered than it would be during a more relaxed and gregarious time.

The three conceptual pieces — all of which she’s cheekily subtitled “An Important Work” — give a pretty good indication of the artistic questions that have been dogging her. A pair of gold-plated balls, each roughly ping-pong size, dangle suggestively from a nail on the wall; she’s called it “Gilded Decorative Object,” and let us know that the gleaming plating is 22-carat, which is good enough to make a jeweler smile. A forty-inch plane of wood, by contrast, is dubbed “Something Useful,” and it’s hard to argue with that, even as you may be more drawn to the decorative objects. “One In A Million” is a wall-mounted box containing a single artwork, and no, you can’t see it. It might be decorative, or it might be useful; in either case, it’s been shut away for an indefinite period. In a city where the largest arts establishment is an outgrowth of a long-term storage facility, what value might accrue to a painting kept under lock and key? Is art sleeping through this difficult period, and will it come alive when we’re finally let out of the box? Do we prefer utility, or decoration, and why do we always seem to insist on a sharp distinction between the two? 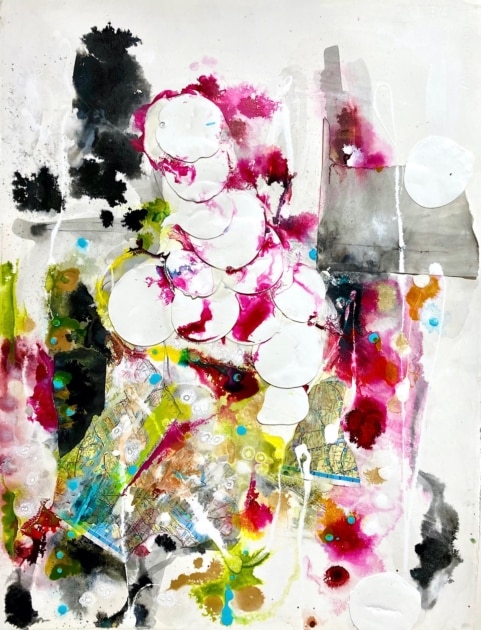 Anne Novado “Finding Beauty in the Chaos, I”

The new works on paper suggest that whatever is in the box is well worth seeing. “Fiat Lux N.6,” for instance, possesses the melting quality that characterizes much of “Non-Linear”: washes of green that ebb into yellow circles, and dots of gold leaf (there’s that gold leaf again; Novado is drawn to understated expressions of opulence) that dance around the body of the image. “Finding Beauty in the Chaos I” amalgamates overlapping circles of white paint, strawberry jam-colored bursts of acrylic, blots of black ink, and torn-up road maps. As good as her promise, Novado brings these elements into harmony. Another striking piece is the smallest in the show — “Festooned, I,” a handsome earth-toned rectangle that, non-representational as it is, nonetheless seems to suggest a tower poised atop a mountain, set under a heavy sky.

The four oils on canvas that constitute the heart of the show are also abstractions that lean, accidentally or not, toward representation. The four “Finding Beauty in the Chaos” portals (her word) are circular paintings with color pushing at their circumferences, Spin-Art style, and bleeding into the white space beyond. One of these evokes a red Jersey sunset over the water, while another resembles a great blue bird. These geode-slices also feel seasonal: a wintry nebula in a night sky, a spring-like avian ascension, a summer swirl of melting color, and the glorious disappearance of an autumn day. Robert Glisson, the New York nature painter who often shows at Novado Gallery, and who, through the audacious use of color, often imparts a psychedelic quality to his bucolic landscapes, would surely understand.

Or maybe he wouldn’t. These paintings are, after all, abstract and non-linear. But even non-representational artists are sensitive to the problems of the world around them, and they do manage to inscribe those anxieties on their canvases. We really have been watching the seasons turn through a pinhole. Those of us who haven’t given up have indeed been trying to assemble some beauty out of all the chaos. Neither the decorative nor the useful have been providing us much comfort. December 2021 and January 2022 promise difficulties, but what months haven’t? As the calendar turns and another vexed year begins, it’s a comfort to know that Anne Novado is keeping the lamp lit, and that the joy and provocation she’s managed to wrestle from the struggle is right there, visible for all of us to see.

(Novado Gallery is closed from December 23 through December 27. But it’s back open on December 28 and 29, and it’ll keep its usual generous hours during January: Saturday and Sunday, 11-6, Wednesday and Thursday 10-5, Friday 10-4, and Tuesday by appointment.)