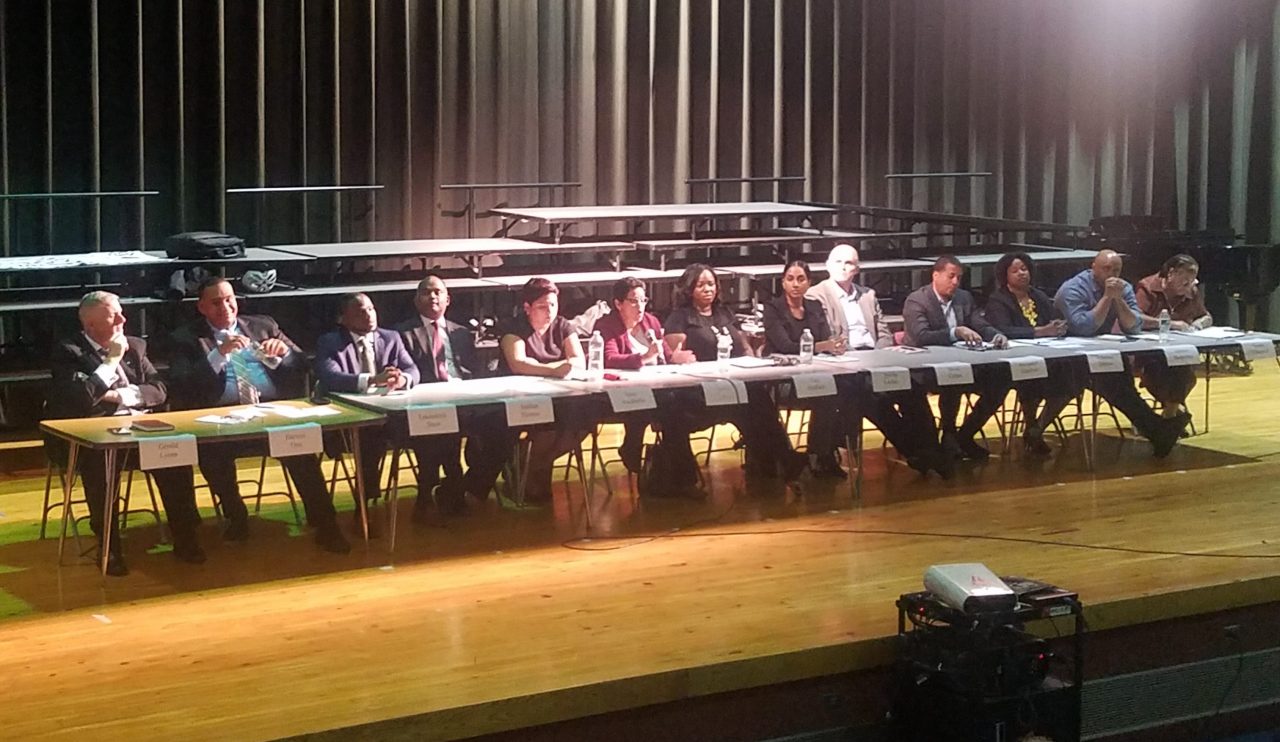 On November 5th, Jersey City will vote on the future of its children. Thirteen candidates are vying for five positions, five positions that will shape schools for years and change the composition of the board.

Jersey City voters elect three members of the public each year for a three-year term. This year, however, there are two additional one-year-term seats to fill due to the resignations of members Amy DeGise and Matt Schapiro.

The majority of candidates are divided between two slates. Here’s how all of the alliances shape up and highlights of the candidates’ platforms: 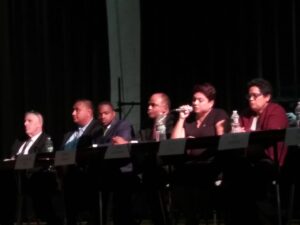 This ticket, backed by both the New Jersey Education Association (NJEA) and the Jersey City Education Association (aka JCEA aka the city’s teacher’s union), includes three incumbent board members seeking reelection to full-year terms: current board president Sudhan Thomas, Gerald Lyons, and Lekendrick Shaw. An additional incumbent whose seat was appointed following a vacancy and who has unsuccessfully run for the board four times previously —Gina Verdibello—is running with this team for a one-year term; The fifth candidate on the ticket is Darwin Ona. He’s neither run for nor served on the board before.

Since most of the members of this slate have been on the board for several years, it is only fair to consider what has transpired during their tenure. They were burdened with an underfunded budget that led to overcrowded classrooms, steep cuts of teachers and teachers’ aides and reductions in sports and other recreational programs from our city’s schools. This certainly deserves voters’ sympathy. But the board has been the nexus of controversy these past three years as well: from the disparaging treatment and subsequent firing of former school Superintendent Marcia Lyles, to raises for administrative staff in a new contract just prior to teacher layoffs, to a lack of potable water due to an unresolved lead issue, and to the deteriorating physical state of many of the city’s schools (including the A. Harry Moore School, a historic school for disabled children).

The slate points to its experience, support for the recently implemented payroll tax, and innovative ways to raise additional financing as reasons to support it. Its candidates believe they are best qualified to steer the district and “serve as guard rails” as the district regains full control from the state in the next two years. High on their list of priorities is “full funding for the operations budget and long-range facilities plan.”

To fill the budget gap created by reductions in state aid (and by reductions in revenues stemming from real estate tax abatements),  Thomas, Lyons, Shaw, Verdibello and Ona not only favor the one percent payroll tax levied on Jersey city’s businesses, they want it raised to two percent. In addition, these partners of labor would like to see further partnership with the city’s private sector in the form of a foundation to financially strengthen the public schools. 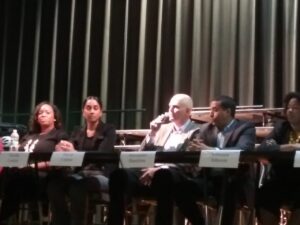 “Change for Children” is the other slate in this year’s BOE election although what fueled its formation was opposition to the payroll tax enacted in 2018 by the city council (dedicated to funding the public schools), not any particular relationship with organized labor. The LeFrak Organization, best known locally as the developer of Newport in Jersey City—along with Exchange Place developer Mack-Cali—is the financial engine of this ticket. Funding comes indirectly from the developer’s newly created Super PAC “Fairer NJ.”

The Change for Children slate consists of Alexander Hamilton, Asheenia Johnson, and Noemi Velazquez, who are running for three-year terms and David Czehut and Anthony Sharperson, who are running for one-year terms. Due to an email mixup, we did not receive responses to Jersey City Times’ questionnaire seeking their reasons for running and their platforms. (This questionnaire is what elicited the positions of the Education Matters candidates provided above.) The following biographical information, though, has been culled from the Change for Children’s website:

Noemi Velazquez has a master’s degree in education from NJCU and has worked in the Jersey City Public Schools district variously as a teacher, supervisor, special assistant, and associate superintendent for 40 years.

Asheenia Johnson graduated from New Jersey City University with a bachelor of arts in economics and is currently the aide to Ward F councilman Jermaine D. Robinson. She has also served as a constituent aide to Senator Sandra Cunningham and a press secretary to Assemblywoman Angela V. McKnight.

A resident of the Hamilton Park neighborhood in Ward E, Alexander Hamilton is an entrepreneur with experience in marketing and technology. He has a special-needs child who attends public school in Jersey City.

David Czehut is a graduate of Princeton University and has a master’s of business administration from Columbia University. Mr. Czehut is a product manager for an e-commerce company. 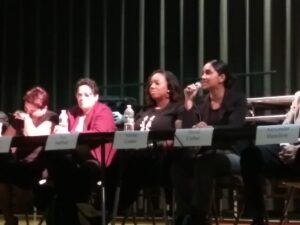 Three independent challengers are running for full-term positions on the school board: Tara Stafford, Neisha Louhar, and Sonia Cintron. These candidates did provide individual answers to the Times’ questionnaire, information from which is as follows:

Stafford is a senior risk management analyst at Prudential Financial in Newark and the daughter of former Jersey City schools superintendent and former state assemblyman, Charles T. (Dr.) Epps. She told the Times, “Over the past few years, I’ve heard countless stories highlighting a lack of decency, leadership and stability on the board. That’s why I’m excited to start a new chapter based in building bridges between communities.”

Given the district’s financial crisis, Stafford supports the one-percent payroll tax but would like to hear alternative funding proposals presented by public-policy and public-finance experts and says the overall impact of the payroll tax “remains to be seen.” Asked what her priorities would be should she be elected, Stafford cited “choosing a permanent superintendent” and redressing “the inequities between some of our schools especially when it comes to facilities and safety.”

Neisha Louhar is a Snyder High School graduate and has made providing in-school mental health support and other ancillary services to Jersey City’s school children a key part of her platform. “Receiving social-emotional and mental health support leads to higher achievement,” she told the Times, because “if unmet, mental health problems are [sic] linked to costly adverse outcomes such as academic and behavior problems, dropping out, and delinquency.”

Louhar envisions a schools-based “youth service program” that, in addition to psychological counseling, would provide “employment counseling, substance abuse education/prevention, primary medical linkages, learning support, healthy youth development, recreation, and information/referral.” Jersey City Times did not ask Ms. Louhar (or any of the candidates) directly how such programs would be paid for. Louhar did say, “Some feel burdened by a payroll tax rise. An alternative can be [sic] grants and property tax.”

Sonia Cintron is a state-certified substitute teacher proud of having “rallied in support of teachers and students all around the state.” Amongst Cintron’s priorities are reducing classroom overcrowding, making SmartBoards accessible to substitute teachers in every classroom, and providing broader materials and support in their own languages to children who transfer to Jersey City’s public schools from non-English-speaking countries.

Cintron believes that “abatements, whether it’s 10, 20, or 30 years, have put a strain on the Jersey City residents and the economy” and that this “continues to have an adverse effect on the already-underfunded schools.” She supports the one-percent payroll tax on Jersey City businesses and is opposed to raising residents’ property taxes in order to meet the district’s funding needs.

In response to the October 16, 2019 Jersey City Times article, “And the 2019 Candidates for the Jersey City Board of Education Are . . .,” a representative for the “Education Matters” slate advised the Times that biographical information on its members can be found at https://www.facebook.com/EducationMattersJC/.

In addition, the Jersey City Times would like to clarify that, in written responses to its questionnaire that were received post publication, candidates Sharperson, Velazquez, Czehut, Johnson, and Hamilton, who make up the “Change for Children” slate, all voiced support for the newly enacted one-percent payroll tax dedicated to funding the Jersey City Public Schools.”

For more biographical information on the candidates, please visit the following links –