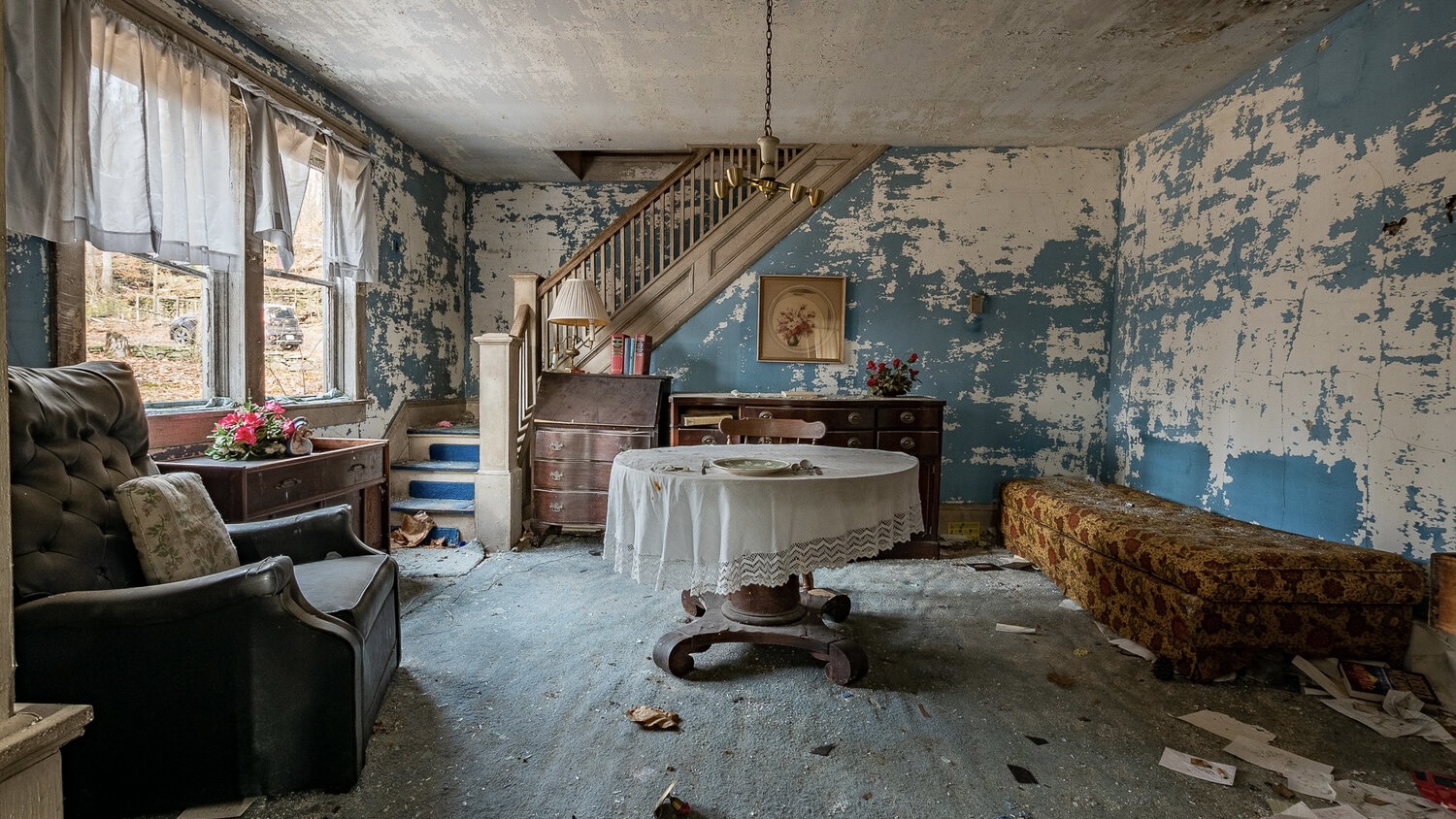 Twenty months ago, just before the pandemic obliterated schedules all over the world, Art Fair 14C held its second annual event at the Hyatt Regency in Exchange Place. It was a visually impressive home for the Fair, but it came with some challenges to coherence. To reach the exhibition, it was necessary to ride the elevator to the eighth and ninth floors of the hotel.  Many of the exhibitors presented their works in guest rooms, propping paintings and sculptures up on beds and leaning them against Hyatt furniture. For many visitors, this was all part of the fun: it felt a bit like a freak takeover of an otherwise corporate hotel, and an on-the-fly conversion of a staid institution into a creative Mothership. But the layout did not encourage serendipitous connections between artists’ works, and the cramped quarters of the hotel corridors obscured the huge accomplishment of the organizers, who’d brought scores of brilliant pieces to the shores of the Hudson.

No such trouble in autumn 2021. Director Robinson Holloway and deputy directors Kristin DeAngelis and Gretchen Von Koenig have had a year and a half to get this right, and they’ve mounted a blowout of the best kind. The third edition of Art Fair 14C, produced by Art House Productions, feels like a post-lockdown rebirth: the successful realization of a particular vision of Jersey arts that’s broad, ambitious and emotionally provocative, and, above all, very elaborately networked. The organizers have found the ideal spot for the enterprise — the Glass Gallery at MANA Contemporary (10 Senate Place), a forty-thousand square foot post-industrial rectangular prism with high ceilings, big windows everywhere, and plenty of space for makeshift walls.

The show, which opens on Friday at noon, and runs through Sunday (full hours and ticket information at www.artfair14c.com), makes room for more than sixty exhibition booths and a parallel juried show that includes some of the most reliably interesting visual artists in the Garden State. Better still, they’ve positioned all of these art compartments so that other artist works are always in view. The result is an experience of total immersion — one that emphasizes continuity between creators and makes a persuasive case for the interconnectedness, camaraderie, and accessibility of the Jersey arts scene.

For those who’ve been privy to this vexed but solid year and a half of art shows in Jersey City, it may also feel like a bit of an encore. Many star performers from recent local exhibitions have brought their bags to the big blowout on Senate Place, including Dan Fenelon, who lit up Novado Gallery with his radiant, rainbow-rich paintings of fantasy animals in October of last year, and Winifred McNeil, whose tiny busts and ragged tiles that look as if they’d been unearthed from Pompeii were last seen at the Art House Gallery in September ’20. Theda Sandiford wheels in a few more of the rope-stuffed and zip-tied “emotional baggage” grocery carts that were such a hairy, discomfiting presence at the opening of the ART150 Gallery at 150 Bay Street this spring. Andrea McKenna, whose distressed figures, caught in a liminal netherworld between life and death, haunted Eonta Space in February 2020, has adorned her exhibition cubicle with furniture that matches her paintings, and seems to announce the coming of a séance. The redoubtable Deep Space Gallery has a corner of their own at the Fair, and they’ve brought along some favorites from their roster of talent, including work by the remarkable painter Ru8icon, whose sensitivity to the particular rhythms of urban space remains tough to beat, the gravity-defying sculptor George Goodridge, and the delightful Rebecca N. Johnson, whose “Bodies of Water,” an enveloping seaside breeze of a show, was one of the highlights of the year in Jersey City art.

Our immediate neighbors make impressive contributions to Art Fair 14C, too. Tim Daly, capturer of dramatic landscapes from Jersey City, leads an entourage from the Neumann Leather Building in Hoboken that also includes oil painter Lou Carbone, animator of blank-faced human figures frozen in ambiguous relationships. Gardenship, an arts collective with its headquarters just over the Hackensack in Southern Kearny, provides a representative sample of the two-fisted, rough-hewn work their artists have been generating recently. Some of the most arresting, can’t-look-away images in the entire Glass Gallery comes to us across our southern border: Bayonne photographer and urban explorer Alex Gulino dazzles with shots of spectral interiors of disused buildings. Mona Brody, whose studio is in the Manufacturers Village complex in East Orange, hangs her dense, mesmerizing paintings in an exhibition space that feels like a slice of the darkest night; her Village neighbor Sarah Canfield answers with clever arrangements of light, tinted by glass panels that achieve the slippery refractory quality of ice. Her colored boxes glisten like mood rings. 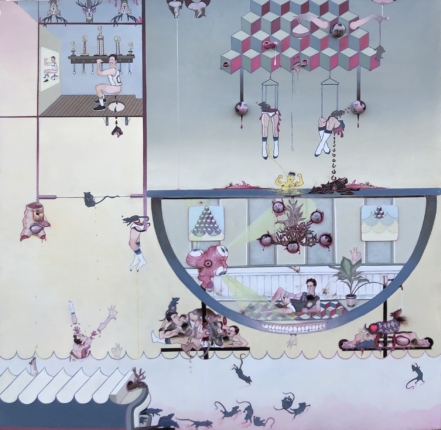 R.J. Calabrese’s “Not With a Bang But a Whimper”

Drawing lines between artists who work in urban spaces like these — many of which are, like MANA itself, repurposed factories — might not seem like such a stretch. Yet the organizers also stretch their hands to a part of New Jersey that doesn’t seem like it would have much in common with the cities on the Hudson and Passaic: rural, farm-dotted Hunterdon County, which has recently emerged as an artistic powerhouse. The Fair demonstrates that the Hunterdon-Hudson connection is real, and growing. Flemington artist Valerie Huhn, whose unsettling work is now on display at the Outlander Gallery on Monticello Ave., contributes two of her paper tapestries festooned with fingerprints and scrawled dates. Susan Mania of Stockton extends her experiments in soft, melting, natural color extracted from natural dyes. From the hills of Lebanon, R.J. Calabrese creates a series of tortured, meticulously rendered hallucinations, simultaneously reminiscent of Hieronymous Bosch, Chris Ware comics, and platformer video games. His “Not With a Bang But a Whimper” is a detailed nightmare in nine panels, and something you could stare at for hours without exhausting — if you’ve got the stomach for it.

What unifies these artists is a profound sense of a Garden State in trouble — one that is often expressed emotionally, and, in a few cases, quite maternally. Impending environmental and medical disaster hangs so heavily over parts of the Fair that it feels like an extension of “Implied Scale: Confronting the Enormity of Climate Change,” MANA’s central 2021 show. Some of these works, like Montclair artist Donna Moran’s silkscreen and paint series “Monsters Among Us,” radiate distress, and feel justifiably accusatory; others, like the sweet-hearted menagerie animated by Sarah Becktel of Brigantine, make endangered animals look awfully friendly. Jersey landscapes abound, but in long Garden State tradition, they aren’t always the most welcoming scenes: Gary Dean Paul’s rendering of the Raritan corseted by refinery towers and freight containers feels as pointed as it is beautiful. And nothing else in the show (or anywhere else) can adequately prepare the viewer for the shattering experience of seeing Paul Ching-Bor’s wall-sized watercolors of bone-white buildings disintegrating into inky darkness.

Ching-Bor’s work is pregnant with prophetic power. Drip by watercolor drip, these towers are coming down to earth; all that is solid will be reclaimed by the night. But his work is suffused with a melancholy too profound, and too slow-moving, to ever be called apocalyptic. Like so much of the third Art Fair 14C, his paintings are a portrait of a slow-motion disaster, created by an artist going stir-crazy in confinement. That period of isolation (fingers crossed) is over now, and scores of great Garden State artists are itching to show you what they’ve done on their inadvertent holiday. Von Koenig, Holloway, DeAngelis, and their team of jurors have rounded up some of the best expressions of our common experience of peril and destabilization, and they’re presenting them to you in one of the most spectacular settings in Jersey City. If you’ve got any interest in painting, or photography, or sculpture, or the act of creation, or local color, or our struggle to define ourselves and our relationship to the cities we live in, you’re strongly advised to get yourself over to the Glass Gallery for the art event of the year.

Murphy Announces Funding for Transformational Greenway from Jersey City to ...
Scroll to top