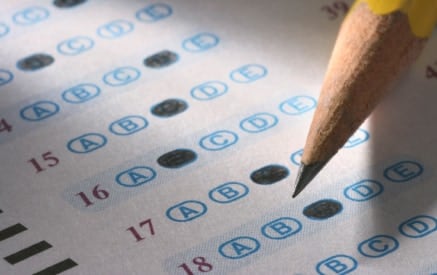 Gov. Phil Murphy settled one question Tuesday for New Jersey’s 2,500 public schools and 1.4 million students in the midst of the coronavirus pandemic — but left plenty unanswered.

A week into his full “stay at home” order for New Jersey and its schools, Murphy started his daily COVID-19 press briefing with an announcement that the state would seek a waiver from the federal government on required standardized testing for students this spring, a contentious issue in this state.

Approval is all but assured, as the federal Department of Education has said it would approve the testing waivers for the hardest-hit states. New Jersey has the second highest number of confirmed coronavirus cases in the country.

“With students at home and not in their regular classrooms, it is simply not feasible for us to be able to move forward with testing in any meaningful way,” Murphy said in Newark.

“The number-one priority is for students to be able to work on the lessons before them and to use the time as best as possible to keep up with their current studies,” the governor continued. “Many parents have moved into a dual role as classroom educator, and it would not be fair for them to also pick up the role of test proctor as well.”

No word on length of closure

But at the same briefing, Murphy continued to hedge on how long schools would remain closed in favor of the remote learning now taking place, in a school year that now has just three months to go. He gave his familiar “until further notice.”

“That’s just not a decision we have made yet,” Murphy said to a question from NJ Spotlight. “I think folks should expect that schools will be closed for a meaningful period of time. That is hardly making news, I know, but when we have a more specific sense, I’ll give it to you.”

And even the long-expected cancellation of state testing raised some questions about what it would mean for students who are required under law to pass the tests for high school graduation come June.

A vast majority of the upcoming graduates are well-through the process at this point. Still, for the rest, Murphy said it would not change current graduation requirements that mandate passing either an 11th grade test or alternative measures, the latter of which take place in school settings. They include achieving certain thresholds on college-prep tests like the SAT or the ACT and a “portfolio appeal” process where a student’s classroom work is taken into consideration.

But when pressed on how that process would happen with schools shut down, Murphy said students wouldn’t be blocked from graduating due to either the changes or the new uncertainty about the end of the school year. Separate state guidance has laid out that the portfolio appeal process should continue.

“We are not going to prevent students from graduating high school due to the decisions we are making about standardized testing or how long schools will be open,” the governor said.

Once the waiver is approved by Washington, Murphy said he would issue an executive order for the one-year suspension and hinted it could involve changes to other education mandates as well. The department said it would also involve the suspension of standardized testing for students with limited English skills and other special needs. The order had yet to be released last night.

Welcome news in some quarters

Even with the lingering questions, Murphy’s announcement of the planned suspension of state testing was welcomed from some school groups, including the New Jersey Education Association, the state’s dominant teachers union that has long been a critic of the testing.

“NJEA supports the decision to eliminate standardized testing this year,“ texted Steve Baker, a spokesperson for the union. “Under these circumstances, there is no way to administer those tests and no justification for losing one minute of available instructional time. We are pleased that the [administration] is pursuing the waiver.”

In what has become an annual ritual that dominates the school day for weeks, the testing would have commenced in earnest in the next month, with exams administered to every student in grades 3-8 in language arts and math and then again in high schools in specific subject areas.

In place now for decades, the statewide exams are developed and administered through the state DOE, but as they are ordered through federal law, cancelling them requires a federal waiver.

But the testing here has been contentious to say the least, with New Jersey among the states that saw open protests several years ago and widespread “opt-outs” by students and their families.

Murphy ran for office on a platform that called for an immediate end to the PARCC testing the state had in place at the time. But that process turned out to be more complicated than maybe had been expected.

The state did technically end PARCC, as other states abandoned it as well. But the same online testing basically remains in place under a different name — Student Learning Assessments. And while the administration has said it plans to seek what it terms as a “next generation of testing,” that request for proposals has still not gone out as of several weeks ago.