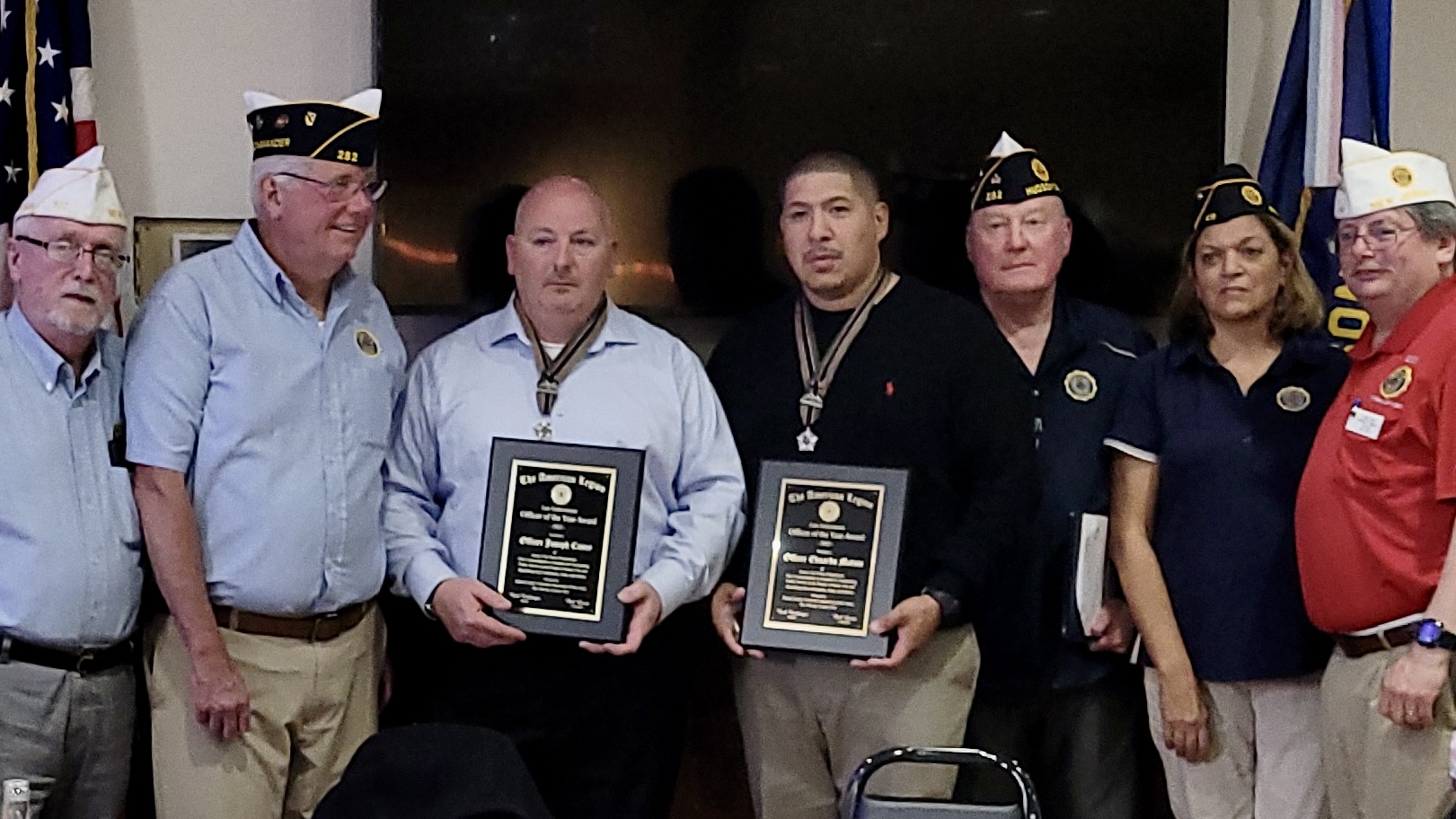 Two of Jersey City’s finest were feted recently by the American Legion’s Beacon Post 419 for their role in saving the life of an infant in the city’s Greenville section last fall.

Police Officers Eduardo Matute and Joseph Casey were presented with the American Legion Law Enforcement Officer of the Year Valor Award 2021-2022 at ceremonies hosted by Legion Post 99 in Kearny on April 29 where the officers and guests were treated to beefsteak dinners and the barber shop harmonies of the Dapper Dans.

Post 419 Commander Ruth Cordner, a Naval Reservist for the past two decades, recommended the officers for special recognition “for their extraordinary heroism above and beyond the call of duty.”

The Beacon Post, which holds its meetings at the Apple Tree House in Jersey City’s McGinley Square, “was dormant for over 20 years,” Cordner noted, “and with the help of the American Legion Hudson County Committee, we got it up and running again in 2019.  We are small, but we are making a comeback.”

In a letter she wrote to Hudson County American Legion Commander Robert Gerris recommending the officers for their awards, Cordner recited their actions on that fateful day, Sept. 18, 2021, when a man—later identified as Billy J. Mayrant—dangled a one-month-old baby from a Rose Avenue second-floor balcony, threatening to toss the infant onto the street.

“For all the witnesses and responding police officers,” Cordner wrote, “this was an exceptionally disturbing and frightening situation.”

As later recounted in a letter written by the officer’s superior, South District Commander Capt. Patrick Sullivan, officers quickly arrived and took positions around the perimeter of the residence.  Casey, described by Sullivan as a “trained crisis negotiator,” placed himself at the front of the house to communicate with the man holding the baby on the balcony while Matute positioned himself along the property’s fence. While Casey talked with the man, other police units made their way into the house through a back entrance, Sullivan said.

“Officer Casey continued to attempt to de-escalate the situation for approximately one hour until talks broke down. The man then without warning threw the baby from the balcony.  Officer Matute … was able to take a few steps and catch the one-month-old child safely in his arms…. The baby was taken to the hospital and evaluated and was not injured during the event.  The man was arrested and charged accordingly.”

In evaluating the officers’ actions, Cordner observed that they “only had seconds to assess and reassess the situation and react accordingly. They mustered all their training, experience, compassion, and teamwork. Their combined skills and attributes prevented a life-threatening situation from turning into a devastating tragedy.

“What these officers were able to accomplish is beyond words. I personally cannot fully comprehend the magnitude of what Officers Casey and Matute had to endure. While our police force protects and serves, when a vulnerable and innocent one-month-old baby is involved, it goes way beyond training and an oath to the profession: It hits you in your heart.”

In a letter written to Cordner in January, Jersey City Mayor Steve Fulop said, “This incident exhibits one of the many examples of how our Jersey City police officers are a vital aspect of our community and why I can say with the utmost confidence that the JCPD is the best police department within the state of New Jersey.”

Capt. Sullivan, in his letter, said the officers “have demonstrated this bravery, service and compassion throughout their careers. They are highly respected by their peers and are often called upon to train newly sworn officers in the South District. They continue to make the department and their city better not just through their work but through their lasting influence on the officers they have trained and work with.”

Officer Casey began his Jersey City law enforcement career June 23, 2006 assigned to the East District and was later transferred to the South District.

Officer Matute started his departmental service Jan. 17, 2014 in the South District, Street Crimes Unit, Investigations Bureau and is now back with the South District, which, according to Deputy Police Chief Nicola Flora, is the “busiest district in the city.”