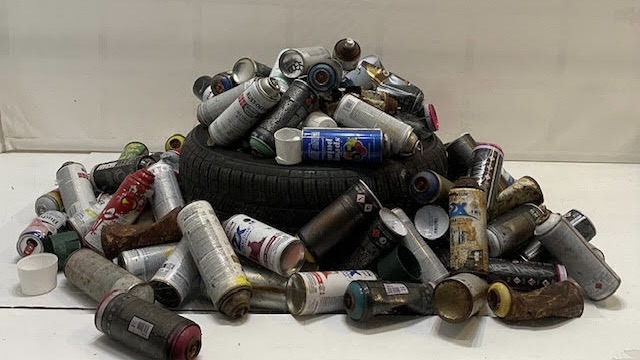 Visitors to “Alive Is a Matter of Opinion: Photography by Christian Gallo” are greeted by a heap of trash.  A car tire, overflowing with scores of empty spray paint canisters, squats in the front window at SMUSH (340 Summit Ave.) It’s a Jersey street pyramid, a commemoration of guerrilla action, a node of communication with the strange gods governing the city at night, a wastrel’s midden, a hunk of junk.

It’s also a crafty bit of misdirection from an artist with more than a few tricks up his sleeve. “Alive Is a Matter of Opinion,” which will be up at SMUSH until Jan. 8, isn’t a sculpture exhibition, and there aren’t any spray-painted canvases in it, either. Unlike street artists and aerosol wizards, who often use giant scale and bright color to impress themselves on the minds of passersby, Gallo works small. Many of his most striking images are best apprehended with your nose mere inches from the photo paper (don’t touch). The sculpture in the window is there to align Christian Gallo with a certain recalcitrant attitude, and to make it clear what kind of artist he is — he’s a keeper of secrets, and an unrepentant trespasser on shifting urban terrain. Engagement with his photographs is like a joyride around the spooky periphery of a North American city, hitting potholes, going a little too fast, marveling at strange things in the undergrowth, and venturing into places where the streetlights have burned out.

It also means riding with friends. Unlike much urban exploration photography, “Alive Is a Matter of Opinion” is busy with evidence of recent human activity. Sometimes there are actual humans. It can be tough to tell what Gallo’s subjects are up to, because they rarely approach the camera directly. A few of these characters appear to be skulking away from the frame and into thick shadows.

The marks they leave on the places they’ve been are more evident: the squiggle of graffiti, the urban detritus of strewn bottles and crushed cans, the blur of vehicles in motion. Other pictures capture long-lost objects that have tumbled into the cracks of the city and lodged there, like a rusted chassis of a car nearly reclaimed by weeds, or a spinet that has done a faceplant in the mud. He’s drawn to objects that once suggested velocity and power, but are now depleted, and have come to rest on the dirt and concrete. The photographer seems to see the city as a great weir, trapping empties of all kinds in its gills, and open to investigation by the curious and non-squeamish.

Like many urban explorers, Gallo is drawn to signs, scrawled figures, letters, and the hieroglyphics of crossroads and underpasses. He likes words on walls; if they’re cryptic, or even indecipherable, all the better to conjure the feeling of destabilization he’s after.  Some of the larger images in “Alive Is a Matter of Opinion” (which still aren’t too big) are of retail storefronts, including a bodega with its corrugated gate pulled down and half of its sign missing, and a black-and-bone-white image of a squat, windowless church resale house that stretches out, territorially, on an unloved Detroit intersection. A shot of the club-like PATH Plaza building in Journal Square is taken from a disused parking lot. The cracked macadam is home to an abandoned ticket-taking station and unruly invasive vegetation. These places aren’t destinations, or civic cornerstones, or even places of intrinsic interest. They’re just spots an urban traveler might pass every day — ones that, because of their accidental oddness and their rough asymmetry, stick in your memory and whisper directly to your unconscious. Every commute, every urban amble, is a sort of sleepwalk: a journey in a half-state, full of symbols and evocative scribbles, and punctuated on both ends by too-bright light and too much fixed meaning.

A more professional storyteller, or just a ruder interloper, would emphasize telling detail and wry juxtaposition. But Gallo isn’t interested in cleverness, or in stepping outside and commenting on these cityscapes at an observer’s distance. Instead, his textures are soft and forgiving, even when the images are harsh. It’s not exactly right to call these shots dreamlike, even if everything is slightly spectral and denaturalized. My favorite photo in the show is an image of a factory window at night, a break in a blank, black wall, with green-grey panels clustered around a single square of white light. The white panel isn’t quite in the middle of the frame, but it serves to center the eye anyway. Activity is happening somewhere in the murk. It’s mysterious and unquantifiable, but strangely fascinating.

SMUSH has amplified the immersive quality of the exhibition by hanging Gallo’s photographs in a continuous line. Each frame touches the next; each image leads your gaze directly to the next. The gallery has created an artificial horizon, a ride around a ring-road, and a conceptual lasso that virtually guarantees you’ll see the whole show. The curation underscores Gallo’s point, or one of them, anyway: to explore the city, you don’t have to break in anywhere. You’re already inside. Maybe you’re in deeper than you think.