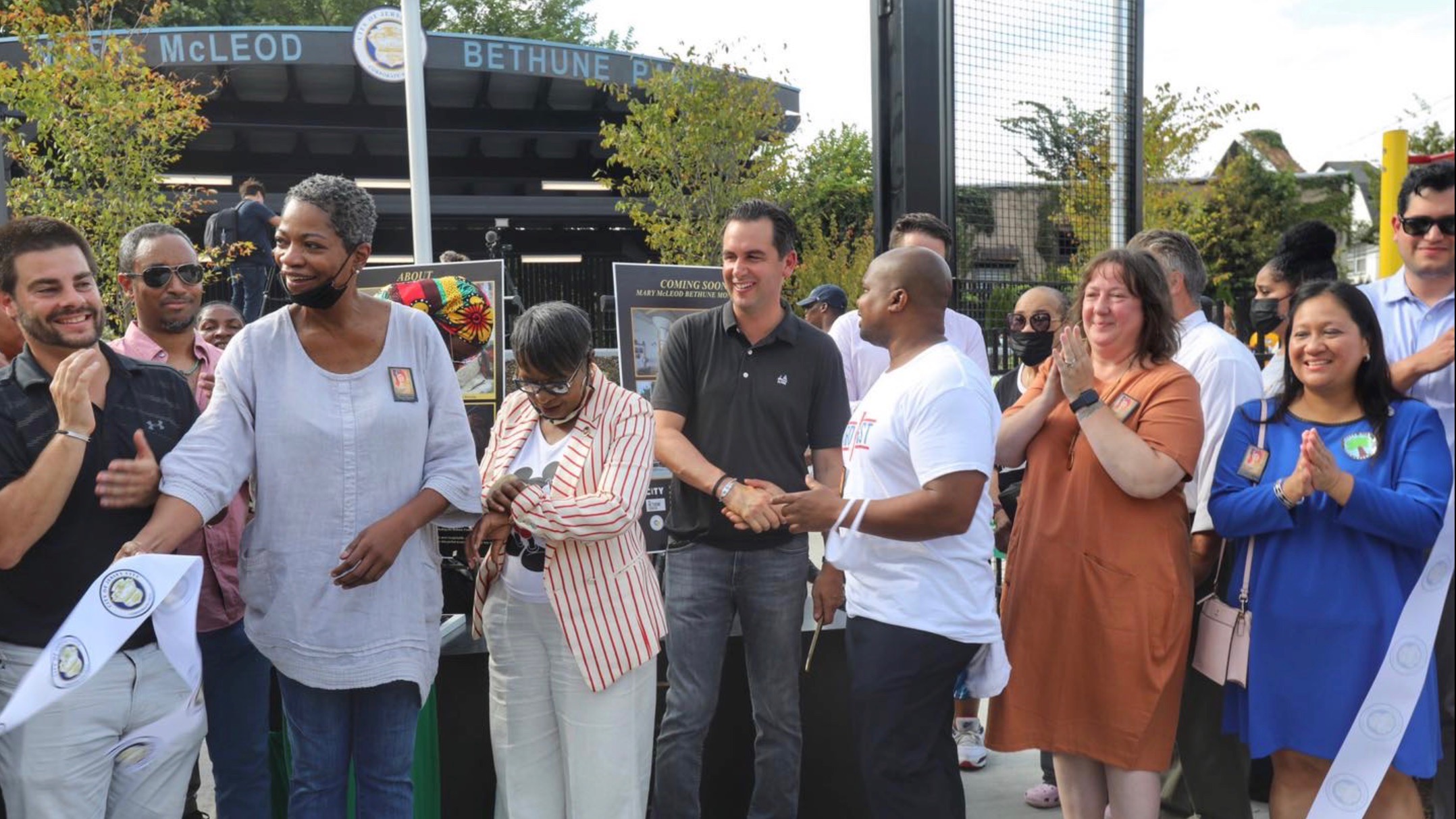 “We’ve seen the need for outdoor recreation in urban areas grow exponentially, especially throughout the Covid-19 pandemic, and this newest park will serve as a valued extension of the Bethune Center to allow for more outdoor entertainment and children’s programming,” said Mayor Fulop.

The $3.5 million park, funded by Community Development Block Grant and capital funding, includes an amphitheater/concert stage, open-air pavilion, shaded seating area, gaming tables, a playground, and exercise equipment. In addition to recreation, the space will be used for celebrations and farmers’ markets. It will also be an extension of the Bethune Center itself providing outdoor space for the center’s many music concerts, yoga sessions, physical fitness classes, poetry readings, art lessons, and other programming. A new parking lot with electric vehicle charging stations was also built nearby to preserve the area’s existing supply of parking.

The new park replaces Fulton Avenue Park which was slated for renovation during the prior administration. Former City Attorney Bill Matsikoudis recalls that it “was nothing but tar, broken glass, old cement, graffiti and old benches” and was situated inconveniently behind some buildings. When the Fulop administration took over, money set aside for its renovation was diverted to the construction of Berry Lane Park. Then a new plan moving the park to MLK, across from the Bethune Center was proposed.  Some neighborhood activists objected.

In the end, Matsikoudis believes the move was wise. “Even though it was delayed, the new plan is better because it’s not stuck behind buildings and it’s bigger.”

Alvin Pettit, executive director of the Bethune Center said, “I am proud to say that the Bethune Center is no longer just a facility, but is now a designated central area of enjoyment for the surrounding community and all of Jersey City…Bethune Park is unique because it is specifically designed to reflect the cultural, educational, and wellness activities that take place daily within the Center. These were also the guiding principles of the great civil rights activist for whom the park is named.”

Indeed, a nine-foot-tall bronze monument honoring Mary McLeod Bethune will be placed at the park’s entrance upon its completion in the upcoming months.

Also on hand was Ward F Councilman Jermaine Robinson, who noted, “After years of planning, I’m proud that we finally found a way to transform this underutilized space into a usable park for Ward F families and the nearby Bethune Center.”

At approximately one-third acre in size, Bethune Park is smaller than half the parks in Jersey City, according to the Trust for Public Land. Nevertheless, the green space is expected to enhance the community’s welfare.

Ferry Service to Liberty and Ellis Islands From Jersey City Resumes
Jersey City, US
7:52 am, May 22, 2022