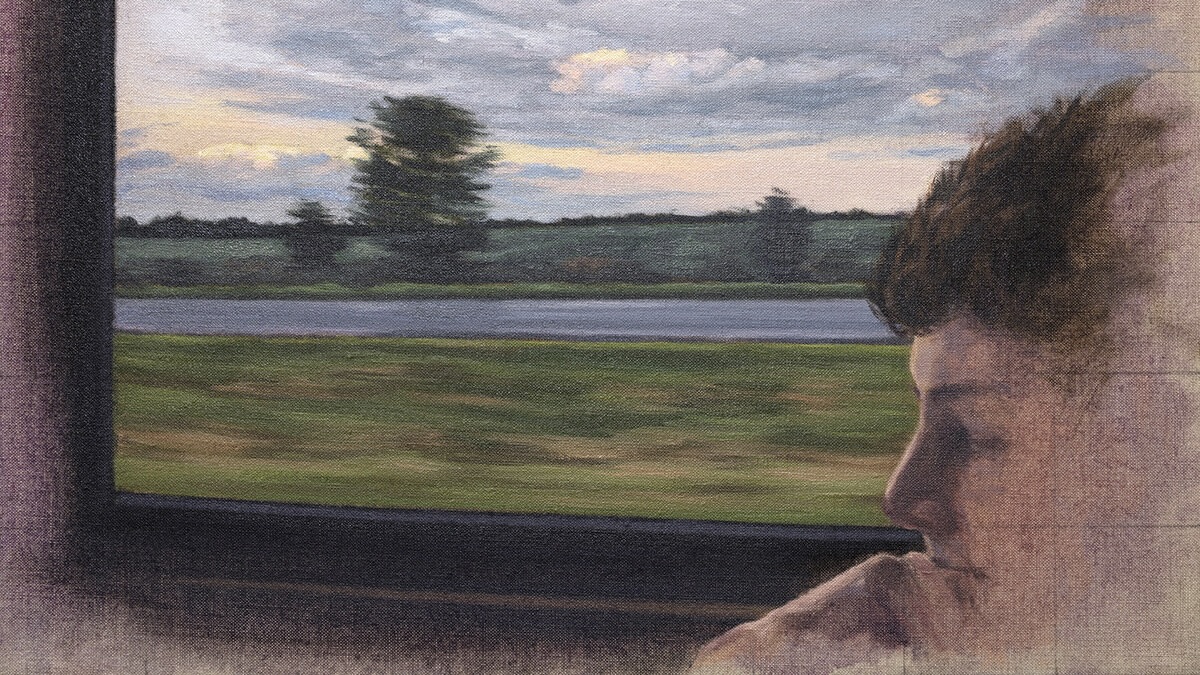 There’ll be a sprinkling of music, and video, and live performance for the final Jersey City Friday of the year. But JC Fridays remains a visual arts event at heart — which suits us, because Jersey City remains a visual arts destination. Like many of our local institutions, JC Fridays is a spiritual descendant of the Studio Tour, and the Studio Tour invites walking around town, opening doors that are usually locked, and discovering what’s inside.  It’s an art experience on the advent calendar model, and that suits the season. But advent calendar doors only open once a year. Jersey City gallery-goers still operate in an environment of scarcity of opportunity. JC Fridays, which has been organized by Art House Productions since its inception in 2006, is a welcome, albeit brief, quarterly intervention in that problem.

Tonight’s art shows are a further amplification of the related themes that have preoccupied local artists all year: the city in peril, environmental crisis, the curious, deadly repose of the pandemic, surveillance and mapping, and the altered state of the mind and body under stress. Some of the work on display is spooky. Very little of it, however, is forbidding. Gallery-owners have gone out of their way to keep things approachable, and, in many cases, surprisingly affordable. Next week, I’ll write a review of the series of incisive urban photographs, each one a gleaming dagger, now on display at SMUSH Gallery (340 Summit Ave). For now, I’ll just point out that many of the best pieces in “Alive Is a Matter of Opinion: Photography by Christian Gallo” are available for under $100. 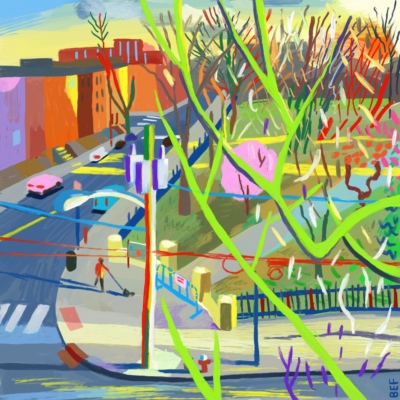 Some of the most accomplished and most introspective artists in Hudson County are, for one day at least, sales-minded. Ben Fine has been everywhere lately: his subjects, comfortable in the fluffy, upholstered pink armchair central to his probing series of portraits, beamed out at visitors to the Studio Tour and at the 14C Art Fair alike. Tonight, Fine wants you to come to him. He’s opening his studio doors (135 Erie Street, 3rd Floor, Room 306, 3 p.m. — 7 p.m.) and he’ll be selling framed prints of his images of Jersey City, most of which were made during the period of isolation we’ve all struggled through. Fine’s streetscapes are depopulated, but they also sizzle with color. There isn’t a drab line in the scenes he’s rendered on his iPad: this is the city as a candy-box, visible, tantalizing, generative of intense cravings, and kept just out of reach by cruel circumstance.

Ben Fine showed some of these works at a group exhibition held by Art House Gallery in a unit at the Hamilton Park Condominium in late November. Curator Andrea McKenna, generally found traversing the spectral world through her ghostly paintings, proved to be sufficiently worldly to help Sawyer Smith Residential pitch units in the building. Fine’s urbane prints — images that make Jersey City look like an awfully friendly place to be — helped set the scene nicely.

It was a reminder of the dual roles that artists play: yes, they’re expected to defy gravity and act as intermediaries to alternate universes, but they’re also bound by the laws of commerce. With The Very Affordable Art Show (150 Bay St, 5 p.m. — 9 p.m.), McKenna and Art House Productions have extended that reconciliation. They’re encouraging you to buy holiday presents that are more interesting and provocative than those you’d find at the mall. Everything in the show, including paintings and sculptures and handmade what-is-its, is $250 or less. To reach the sale (and the ProArts Holiday Bazaar), you’ve got to go to the second floor of 150 Bay. Signage has improved, but the building is still confusing. My advice to you: persist, disregard the main entrance, find the doors on the northeast corner of the building, and take the elevator up. It might seem like a mistake at first, but it’s the right way to go, and you’ll be rewarded when you get there. 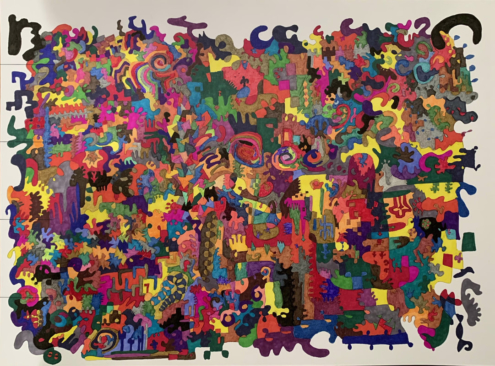 Guillermo Bublik, who also exhibited at McKenna’s Art House show at Hamilton Park Condominium, has quietly become one of the most impressive big-canvas painters in the region. He’s one of fifty(!) artists rounded up by the curators at Drawing Rooms for an ambitious project that’ll decorate the lobbies of the various floors of three buildings in the Powerhouse Arts District: 175 2nd St., 160 1st St., and the Dvora Art House at 148 1st St. The roster of exhibiting artists is impressive, and it features names that ought to be familiar to those who follow local painting and sculpture, including the elemental Sandy DeSando, energetic Caridad Kennedy, Hudson County balladeer Tim Daly, and Mona Brody, whose adroit use of stormy grays and halogen blues make her paintings in oil and shellac feel like slices of night.

Drawing Rooms presented work this way during the Studio Tour, and it felt like a successful mediation between the chilliness of the new condominium buildings and the warmth of the local art scene. I’m glad to see an encore. Given the richness of the work, it’s almost unfair that The Art Project is only available to view from 6 p.m. until 8 p.m.  This is understandable: people live in these buildings, and they may not be keen on congregations in their hallways. But it’s worth remembering that the original vision of the Powerhouse Arts District did not include art sequestered away in lobbies and atriums. The ordinance was designed to bring the art to street level — and keep it there. Those who dreamed up the neighborhood envisioned a line of well-lit galleries, with windows fronting the sidewalk and artwork visible to passersby. 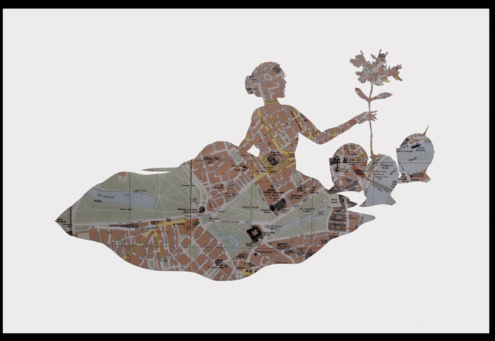 For more than a year, we’ve had a space like that. Drawing Rooms’s Dvora Pop-Up Gallery (160 1st St.) has been the nearest we’ve ever come to a realization of the PAD vision: an independently run, well-curated gallery with regular hours and doors that open directly on to the street.  Walking by Dvora is both a challenge — the art stares right at you — and an invitation to come closer. The current exhibition at Dvora is particularly magnetic, and commendably playful: Scot J. Wittman has fashioned giant heads of historical figures out of wall maps. When they’re not staring each other down, his figures cast a regal, discerning gaze on 1st Street. Wittman is drawn to mythological figures, and he works at a commensurate scale. King Colvinus and Queen Bea, their tresses made of rumpled topography and their faces marbled with roads, parks and city squares, face off in the main chamber. To see “The Duplicitous Countess,” though, decked out in a flowing dress made from a map of Mayfair and Knightsbridge in London, you’ve got to step inside.

Alas, the time for doing that is short. It is all too likely that Scot J. Wittman’s show, which closes on Jan. 12, will be the last one mounted on the first floor of Dvora. Drawing Rooms will soon be looking for a new home for their projects. This isn’t exactly unexpected (it’s called a pop-up for a reason), but it’s still a terrible shame, and a blow to a still-inchoate district that desperately needs more spaces like it. The loss of Dvora leaves the Arts District with one ground floor gallery facing the street: Anne Novado’s beautiful jewel box at 110 Morgan Street.

“Non-Linear,” which opened in late November and runs until Jan. 22, is a particular treat for fans of the space — because Novado, an artist herself, is showing new works of her own creation.  Most of these are acrylics on paper, but she’s hung a few conceptual pieces too, including a wooden box with an artwork hidden inside. The show, which I’ll write about more in coming weeks, feels like a skeleton key: a close look at the Novado spirit, and a concentrated version of that distinctive amalgam of balance, beauty, and whimsy that animates all of the shows she mounts.

One of the nicest things about the Novado Gallery is the schedule it keeps. Because it’s attached to a custom framing shop, it’s open every day except for Monday and Tuesday. (“Non-Linear” is on view during the Gallery’s normal hours today: 10 a.m. – 4 p.m.). You might assume that galleries at the Universities were similarly accessible, but that isn’t always the case. Unless you’re enrolled at St. Peter’s, it can be tricky to access the Fine Arts Gallery at the Mac Mahon Student Center (47 Glenwood Ave, 5th Floor.)  But from 5 p.m. until 7 p.m. tonight, you can visit the fifth-floor exhibition space for closing of “Inside Outside,” a joint show featuring paintings by Jennifer Krause Chapeau and Linda Streicher. Krause Chapeau’s works capture landscapes as they might be seen from the windows of speeding automobiles and bullet trains; Streicher, whose work is more abstract, draws on the rhythms and repetitions of architecture. They were two of the stealth stars of the 14C Art Fair, and if you missed them there — which, given the understated quality of their work, you’d be forgiven for — curator Beatrice Mady is giving you another chance to ride along with them. 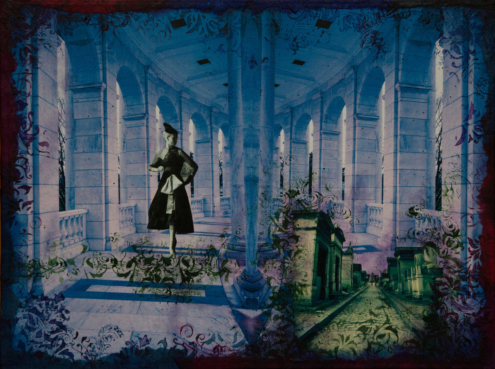 The Green Resort by Stephanie Guillen

Finally, one of the organizers of 14C continues her mission at the Majestic Theatre Condominiums (222 Montgomery St., 6 p.m. — 8 p.m.), where curator Kristin J. DeAngelis is presenting a show that carries the chill of Halloween and the long nights of November into the holiday season. “Eeriness, Ghosts, and Forgotten Goddesses,” an exhibition of new work by mixed-media artist Stephanie Guillen, will haunt the space through the end of February. If you’ve never been to the Majestic, it’s a natural fit for artists who incorporate classical elements into their work. The room, with its wainscoting, its neutral tones, and staircase to nowhere, is built according to an old-school design logic that’s no longer operative in Jersey City.  JC Fridays is inviting you to visit plenty of condominium complexes tonight; here’s the rare one that’s as interesting to look at as the art.  Well, almost.